The time came when even Wolverine, once Cyclops’ strongest supporter, could no longer cope with the mission statement of “survival at any cost” on which Summers had based Utopia. Logan believed they were doing a disservice to the younger generation of mutants, forcing them to become soldiers and killers when they should still be just kids and students. Once he made his decision to leave Cyclops and Utopia and reopen the school in Westchester, Bobby was the first X-Man that Logan asked to join him. Logan told Bobby that he represented the best of what Xavier’s dream used to be and wanted him by his side. Iceman agreed and the pair soon gathered a sizeable number of X-Men to help rebuild the school. The majority of the younger X-Men chose to head east with Wolverine's contingent. [X-Men: Regenesis #1]

Bobby was the last to leave Utopia after one more round in the old Danger Room. As he said goodbye to Scott, Bobby tried to bring up the good times they had shared, but Cyclops was in no mood for nostalgia. Parting on the best terms he could, Iceman joined the Westchester crowd and left for New York. [Uncanny X-Men (1st series) #544] There Bobby worked with Logan, Hank, and Kitty to rebuild the newly-renamed Jean Grey School for Higher Learning. Falling back on his accounting degree, Bobby became the school's bookkeeper and part of the senior faculty for the school. [Wolverine and the X-Men (1st series) #1] 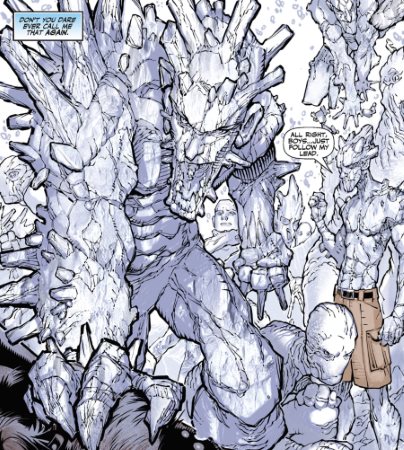 Logan wanted more from Bobby, though. As an Omega-class mutant, Iceman had always had untapped potential. Wolverine made it clear it was time for Iceman to step up and make full use of his powers, because they could never lose another student. On the first day of school, the Hellfire Club injected Krakoa bio-matter into the school grounds, causing the campus itself to turn against the X-Men. Remembering Logan's words, Bobby used the sprinkler system as a source of water and created over a dozen ice-avatar bodies, splitting his consciousness to command a veritable legion of Icemen. Bobby was instrumental in routing the Hellfire Club's forces and protecting the students, but his avatars were guided mostly by instinct instead of him actively controlling each of them. One ice avatar had the impulse to grab Kitty Pryde and kiss her passionately during the ruckus. [Wolverine and the X-Men (1st series) #2-3]

Iceman wasn't completely supportive of all of Wolverine's actions, of course. Logan's secret X-Force squad had battled Archangel as he ascended to become the new Apocalypse, only for Warren's mind to be burned away by a Celestial Lifeseed. As a result, one of Bobby's oldest friends was now in a virtual fugue state, completely oblivious to his past life and convinced he was a real angel. Iceman took charge of Warren's care from Logan and enrolled Angel in the school as a new student so that he could get back up to speed on his life. [Wolverine and the X-Men (1st series) #4]

Warren's new status meant getting the funding for the Jean Grey School was more trouble than anticipated. The Hellfire Club manipulated the board of Worthington Industries into a vote of no confidence against Angel, freezing his accounts. Bobby told Logan he was running low on money 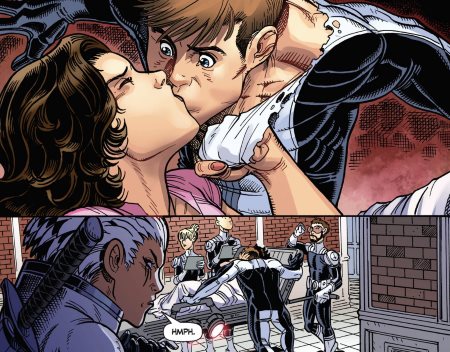 in the coffers, sending Wolverine on a mission to fix that. In the meantime, Kitty was infected with microscopic Brood, forcing Iceman and the X-Men to enter her body at microscopic size to dispose of the creatures. Bobby's prowess in battle drew the attention of Warbird, the X-Men's Shi'ar bodyguard in residence, although her forceful come-ons were somewhat distracting. Indeed, when Kitty was saved, she returned Bobby's surprise kiss from days earlier, making Iceman's love life more complicated by far. At the very least, the X-Men learned their new resident Krakoa could grow diamonds from trees, so money wasn't an issue anymore. [Wolverine and the X-Men (1st series) #5-7]

Life among the X-Men continued as normal, which meant everyday examples of absolute insanity. Iceman helped defend the school against marauding N'Garai, the attack of Exodus and Weapon Omega's unstable powers. [X-Men Legacy (1st series) #260.1-265] After an assault by the Marauders and the Hatchi Corporation, Bobby also stood by Northstar when he married his boyfriend Kyle in Central Park. [Astonishing X-Men (3rd series) #48-51]

In time, the schism between the X-Men factions proved to be traumatic. The Phoenix Force returned to Earth, searching for Hope Summers. Cyclops saw this as a chance for the rebirth of the mutant race, but Wolverine and Captain America only saw the risk of destruction. The Avengers stormed Utopia to capture Hope, and Cyclops' X-Men defended her. When Hope went on the run, X-Men and Avenger factions split up to find her and battle each other. Cyclops came to the Jean Grey School looking for recruits and he found them in Iceman and Rachel Grey. Bobby couldn't stand by Logan in this matter and he sided with mutantkind against the Avengers.

Because of the Avengers' interference, the Phoenix did not find Hope but instead fragmented to possess Cyclops, Emma Frost, Namor, Colossus and Magik simultaneously. The so-called Phoenix Five began reshaping the world for the better, bringing an end to hunger and war across the globe. Captain America and Wolverine refused to admit defeat, however, and became an underground movement trying to undermine the X-Men's work. During this period, Iceman lent his powers to irrigation efforts by the Phoenix Five, bringing fresh water to places that needed it. However, he was also forced to fight against Beast, who remained loyal to the Avengers. 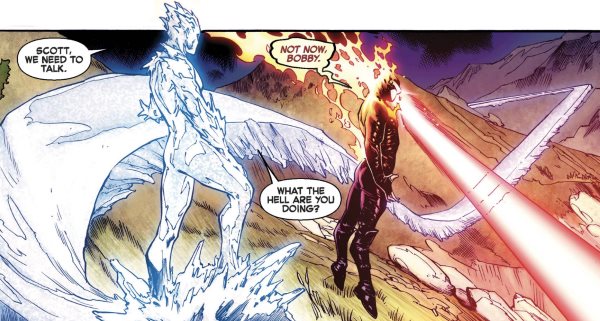 The god complex of the Phoenix Five only continued to grow, and Iceman became uneasy. As the Avengers were declared enemies of mutantkind and hunted in the streets, Bobby finally found he could not stomach Cyclops' side any longer. He returned to the Jean Grey School to help teach the students again, rather than fight heroes. In his absence, Kitty Pryde's relationship with the Phoenix-Colossus had also crumbled and she reminded Bobby he needed to ask her out soon. Eventually, the rest of the X-Men siding with the Phoenix Five joined with the Avengers as well, but it was too late. When he became the last Phoenix standing, Cyclops went full Dark Phoenix, murdering Professor Xavier and nearly bringing an end to the world before Hope and Scarlet Witch helped the former truly claim the Phoenix Force, and use it to rekindle mutantkind on Earth. Nevertheless, Bobby was forced to witness one of his oldest friends kill the man who had been a second father to him. [Avengers vs. X-Men crossover] 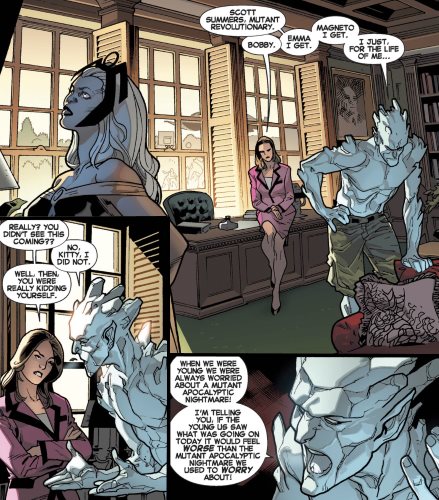 Things got worse from there. Cyclops escaped imprisonment, along with Magneto and other X-Men loyal to his view of things. As new mutants began to emerge in the world, Scott rescued them and began calling for a mutant revolution. Unable to believe how far things had come, Bobby mused aloud that if the old Scott could see what he had become, he would slap himself silly. This idle comment provoked Beast into actually traveling into the past to retrieve the original five X-Men from shortly after their formation, and bringing them into the present. Bobby was completely unprepared to see his younger "snowman" self walking around, and it was even stranger when they decided to stay. [All-New X-Men (1st series) #1-5]

In the wake of all this, Bobby and Kitty finally set aside some time to have their first date. They found little in common at first when trying to go on a date like normal people, until they resigned to 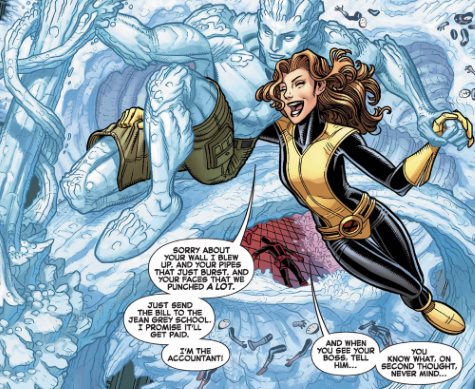 the fact that they weren't normal. Once they tested the boundaries of what could be done while having fun with super-powers, they relaxed with each other more. They also bonded over each having once been the youngest X-Man of their time, yet now being held to the standard of adults and professors at the school. [Wolverine and the X-Men (1st series) #24] Their relationship grew slowly after that, as they began dating casually to see how things developed.