Bobby didn't have much time to rest and recuperate. The X-Men soon learned what Sinister and the Marauders were trying to blind them to – a new mutant birth, the first since M-Day, and one so powerful that it blew out Cerebra when it manifested. The X-Men found themselves in a race against the Marauders, the Purifiers who believed this child to be the mutant anti-Christ, and the mutaphagic Predator X to acquire this new mutant. With so many forces in play, Bobby served primarily as back-up during the quest. After several losses, the X-Men claimed the baby and Cyclops turned her over to Cable, to take her into the future where she could be raised in peace. With the mansion destroyed and the X-Men in disarray, Cyclops officially disbanded the team for a while to give them time to reorganize properly. [Messiah CompleX]

Bobby found himself living in New York City for the next few weeks and, seemingly by sheer coincidence, ran into his old girlfriend Opal Tanaka at a party. They renewed their relationship and even after the X-Men started to reform in San Francisco, Bobby remained with Opal in the hopes 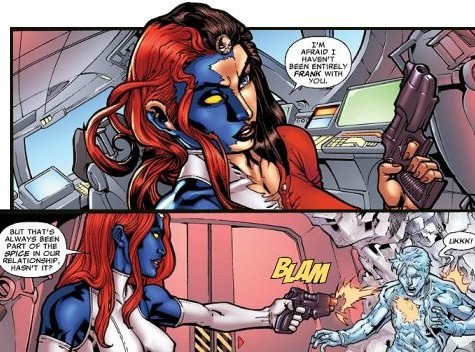 of building a normal life with her. But when his powers started acting up, he was forced to seek help from Hank and the X-Men.  Bobby was experiencing symptoms similar to when his powers first manifested, feeling absolutely cold all the time regardless of the surrounding temperature. Hank sent a Blackbird to pick him up and Opal insisted on accompanying him on the trip to California. En route, “Opal” revealed herself to be Mystique and admitted that she had been mimicking Iceman's old flame from the start. Bobby's power problems were also her doing, thanks to the same neural inhibitor she had used on Bobby months earlier. Mystique bombed the side off the Blackbird, shot Iceman at close range, and tossed him out of the jet. With his powers malfunctioning, he was unable to save himself and crashed in an Iowa mountainside at terminal velocity, shattering on impact. [X-Men: Manifest Destiny #1] 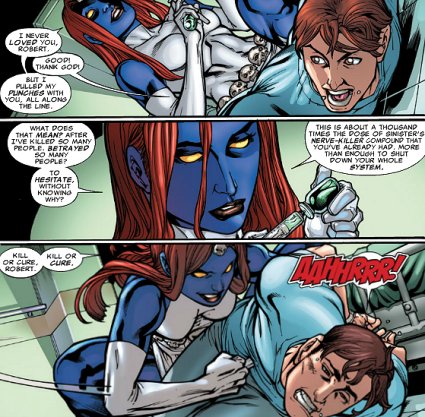 A week later, melting snow flowed down the side of the mountain and into a forest lake. Iceman reformed himself out of these water molecules, first as a liquid, then ice, and finally back to his human form. He was completely whole, if not completely healthy. Stumbling towards civilization, Bobby collapsed on the side of a roadway and was brought to a nearby hospital to be treated for “hypothermia.” Mystique confronted him again in the hospital as he was recovering, spouting some nonsense about “kill or cure.” She was worried about her own killer instinct after failing to kill Iceman on two recent occasions when she had the chance. So Mystique decided to test them both, aggressively forcing Bobby to push the limits of his powers which he had ignored for so long. She injected him with a dose of Sinister’s neuro-inhibitor that was a thousand times stronger than the last and sure to kill him. Miraculously, Iceman managed to save himself by drawing in the ambient moisture around him and incorporating it into his body. In a matter of seconds, Bobby had completely rebuilt his body from scratch, purging every existing, poisoned molecule from his system and replacing them all with new molecules from the air around him. This complete cleansed his system of the neuro-inhibitor. [X-Men: Manifest Destiny #2-3]

He and Mystique continued their game of cat-and-mouse all the way to San Francisco, where she posed as him and threatened to detonate a bomb on the Bay Bridge. Iceman confronted Mystique atop one of the bridge’s towers. He accused her of doing all she’d done out of self-pity because she’d pushed her daughter away time and time again, had alienated her son, and done the same with him. He bluntly told her that she was crazy and that it was her madness that drove away the people she cared for, including him. Iceman rejected her and stopped her bombing attempt. Unwilling to admit that what Iceman said was true, Raven threatened revenge and dove off the side of the bridge before he could bring her to justice. [X-Men: Manifest Destiny #4-5]

Iceman became a permanent fixture with the X-Men again in their new home in San Francisco. Iceman and the X-Men were soon forced to defend the City by the Bay against the Skrull invasion and Bobby's new mastery over his powers proved a huge tactical advantage. [Secret Invasion: X-Men #1-4] Despite being embraced by most of San Francisco for this heroism, not everyone approved of the X-Men's new status. Norman Osborn used his newfound political clout and his team of replacement X-Men to try and force the X-Men out of San Francisco. Bobby squared off against his old teammate the Mimic who proved no match for Iceman's increasing skill with his powers. [Dark Avengers/Uncanny X-men: X-Men: Exodus #1] Although the X-Men were victorious against Osborn's forces, Cyclops decided to relocate the X-Men outside of his sphere of influence. He moved the entire mutant population into international waters off the coast of California on a man-made island dubbed Utopia, fabricated from the salvaged structure of Asteroid M. It proved a considerable strain on the X-Men's resources and alliances to create a viable community for their 227 members, allies and civilians. Bobby was given a critical role in their new civilization, using his powers to provide all the necessary water for Utopia’s people to survive. [Uncanny X-Men (1st series) #515] 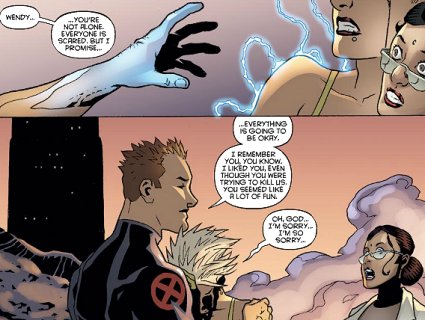 In addition to his duties as a walking aquifer, Iceman continued lending his power and skills to the defense of mutantkind and their new home. Bobby tried his best to keep up appearances in the face of the X-Men’s ongoing struggles. He played the comedian for everyone, pranking the “X-Babies” to remind them that the original X-Men were still the best, and making inappropriate but hilarious jokes about Namor’s intimate relationship with sea life. Beneath his trademark quips, Bobby was convinced that mutantkind was on its last legs and would soon go extinct like the dinosaurs. Therefore, when Wendy Sherman aka Stinger from the Alliance of Evil, came looking to him for reassurances, Bobby wasn’t much help. Instead of consoling the girl who was reasonably scared about their future, he made a joke about how she and the other Z-listers living on Utopia had little chance of surviving next to the X-Men. Distraught, Stinger took Kavita Rao hostage the next day and tried to force her way off the island. Realizing his mistake, Bobby didn’t fight with Wendy. Instead, he reached out to her and connected with her as a human being. They later shared a picnic lunch together and Iceman tried his best to act hopeful for the future. [Nation X #1] 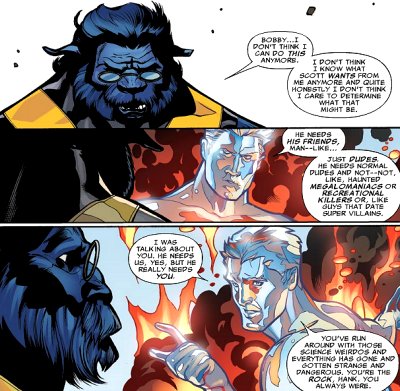 Throughout all the team's troubles and his own personal concerns, Iceman remained resolutely dedicated to the X-Men’s cause and to Cyclops’s leadership. When Beast started to have doubts about Scott and all they were doing for mutantkind, Bobby’s faith in Scott was unshaken and he told Hank that Scott needed their support now more than ever before. [Uncanny X-Men (1st series) #518]

When Cable returned from the future with the new mutant baby, now a teenage girl named Hope, the X-Men were mobilized to bring them in safely. They faced significant opposition from Bastion and his ilk of anti-mutant activists. Hope was ultimately secured and brought to Utopia, but not before the X-Men suffered several losses, including long-time member Nightcrawler. Bobby oversaw the funeral arrangements for Nightcrawler and officiated the service to make it as close to Kurt's Catholic faith as possible given the circumstances. [Uncanny X-Men (1st series) #524]

Despite Hope's return and the appearance of the first new mutant manifestations since M-Day, the X-Men were still beset by a constant flow of attacks and were continuously forced to defend the small nation they had formed for mutantkind. Bobby maintained his active role in the X-Men, assisting both in battle and with some administrative duties like traveling to Los Angeles to hire Kate Kildare and Hestia Public Relations to keep things looking positive for them in the press. [Uncanny X-Men (1st series) #528]

Driven to new lengths to ensure their survival, Cyclops found new and creative ways to make use of Iceman's expanded abilities. For example, during the vampire nation's invasion of Utopia, he had a priest bless Iceman’s body with the blessing for holy water, giving him a massive edge against their undead opponents. [X-Men (3rd series) #5] 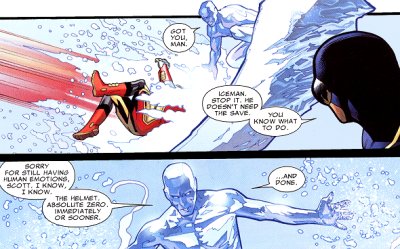 Despite his loyalty to the team, Iceman eventually began to question Cyclops’s way of doing things. He was surprised at how militaristic the X-Men had become and the more extreme tactics that Cyclops was employing. He was visibly shaken when Scott ordered the death of the Evolutionaries, even though all of humanity was on the line. [X-Men (3rd series) #15] In the battle against the magically super-charged and possessed Juggernaut, Bobby stalled his attack run to make sure Colossus was okay after taking a hit. Cyclops chastised him for not following orders, to which Bobby sarcastically apologized for still having human emotions. [Uncanny X-Men (1st series) #541]