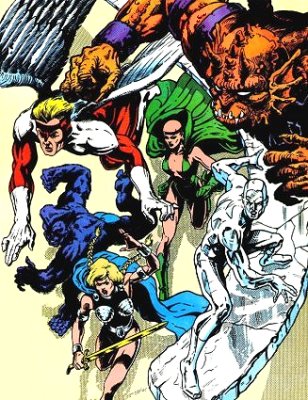 During his summer break from college, Bobby decided to visit his old buddy, Hank McCoy. Beast was now a member of the informal gathering of heroes known as the Defenders and was set on forging the group into an official team. Iceman got swept up in Hank’s efforts and soon, along with Angel, Gargoyle, Valkyrie, and Moondragon, they formed the New Defenders. [Defenders (1st series) #122-125]

Bobby had some difficulty telling his parents about his decision to resume his career as a super-hero. Although Professor Xavier had originally wiped their minds of any knowledge of his powers, Bobby had told his parents about his mutant abilities and crime-fighting career some years ago. His parents had never been fully comfortable with it, dreading the phone call telling them their son had been killed in battle. Hank and Warren went with him to tell the Drakes about his decision. Though they were surprised by and unhappy with Bobby's news, they eventually came to accept it after he assured them he would continue to pursue his accounting degree. [Defenders (1st series) #127] 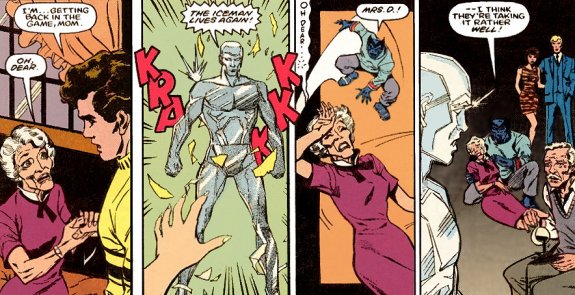 Among the Defenders, Iceman continued to have difficulties with his love life. It began with Moondragon, an unwilling member of the group who had been forced onto a path of humility by the All-Father Odin for her past misdeeds and manipulations. An enchanted headband prevented her from using her psychic powers to their full potential, or from removing the headband herself or through the compulsion of others without causing her intense pain. Nevertheless, she attempted to indirectly manipulate both Angel and Iceman for weeks into falling in love with her and removing the headband without a direct command from her. These manipulations failed and Moondragon eventually learned her lesson of humility and had the headband removed honorably before Iceman acted upon his artificial feelings for her. 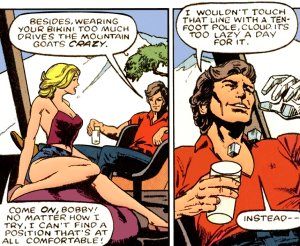 On a more genuine level, Iceman began flirting with the Defenders’ newest member, Cloud, a young woman who had been forced into working for the Secret Empire through implanted memories, but now had no recollection of her past. [first signs in Defenders (1st series) #132] Bobby’s attraction to Cloud hit a snag when she transformed into a man overnight, triggered in part by Moondragon's low-level manipulations to make the others like her. The confused Cloud felt that being a man would allow her to act upon her newfound feelings of love towards Moondragon better, yet was as surprised as anyone when her body actually responded to the idea. [Defenders (1st series) #136]

Bobby had problems dealing with Cloud's constant gender-switching and had to overcome feeling the same sort of prejudices he had experienced all his life as a mutant. In time, he realized that Cloud was suffering as much as he was and he made up with him/her, promising to help find out who and what he/she truly was. [Defenders (1st series) #138, 142]

Some weeks later, the riddle was solved, as Cloud turned out to be a giant nebula that had come to Earth for help. To communicate, it took on the human forms of two car crash victims along with their pain; the shock of suddenly developing a human nervous system made her amnesiac. After the Defenders helped to fight the cosmic danger she originally came to Earth to fight, Cloud and the group parted ways, though not before the nebula thanked Bobby for his love and apologized for any grief it had unintentionally caused. [Defenders (1st series) #150]

Right after their return, Moondragon and Gargoyle were taken over by a mystical entity, the Dragon of the Moon, to be used as pawns to take over the world. The Interloper could use his powers as an Eternal to stop the Dragon of the Moon, but he needed extra lifeforce to completely defeat the beast. While the three former X-Men were kept busy with rescuing friends and loved ones, the other Defenders sacrificed their lifeforces to destroy the dragon. When Beast, Angel and Iceman returned to the scene, they found both their allies and their enemies had been turned to dust. With more than half the team gone, the Defenders disbanded. [Defenders (1st series) #152] 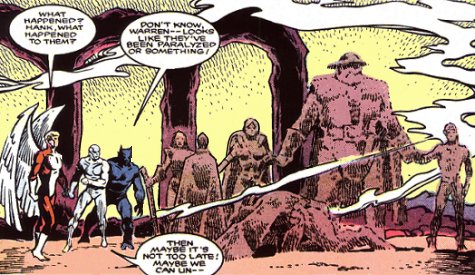