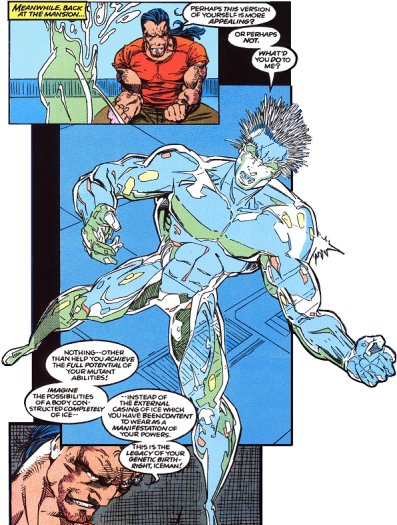 Shortly after things fell apart with Opal, Iceman began to understand that he had only barely scratched the potential of his mutant powers. Mikhail Rasputin used his matter/energy powers to show Iceman his that powers actually enabled him to transform his physical state, becoming living ice or water. [Uncanny X-Men (1st series) #291-292]

In the wake of Mikhail’s manipulations, Bobby didn’t get the opportunity to experiment with his powers to a significant degree until a battle with the Acolytes. Facing off against Frenzy, a former sparring partner from his X-Factor’s days, Iceman was heavily outclassed by her sheer strength and power. In response, he forged layer upon layer of ice on his frame, “hulking out” to significantly increase his own mass and strength. [Uncanny X-Men(1st series) #300]

Some weeks later, Iceman was checking on the comatose body of Emma Frost, who had been recuperating in the mansion’s med-unit, when the building was struck by a power overload. Emma was shaken awake and took possession of Iceman's body. Determined to find out what happened 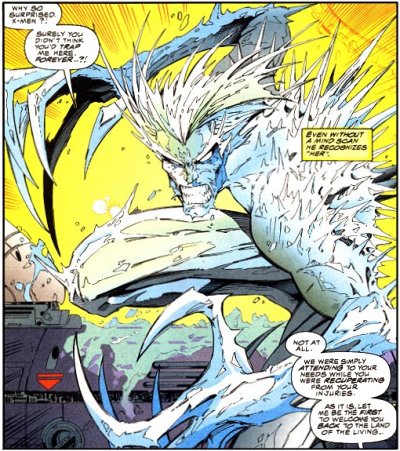 to her students, the Hellions, Emma used Bobby’s mutant powers in ways he himself had never thought possible.  To cover her escape, she jumped into a river and prevented the X-Men from following by freezing the entire surface, emerging only five seconds later a few miles down the road. By mingling his/her molecules with the moisture of the water, Emma was able to transfer her consciousness through the water at the speed of thought, forming a new ice body miles away. Even Emma herself was surprised at this near unlimited potential. Finally, she reached her former offices but, when she heard that her students had died in her absence, she realized that she could no longer operate alone. Emma returned to the mansion and restored Iceman’s control of his own body. [Uncanny X-Men (1st series) #311-314]

Iceman was once again troubled by the fact that everyone seemed to be better at using his powers than him. He found support during this period in his new friendship with Rogue, who was no stranger to issues involving mutant powers. When he went to visit his parents again, Bobby invited Rogue to tag along for support. Wrongly assuming a romantic relationship between the two, Bobby's father verbally attacked them with the same prejudices he spewed when Bobby was dating Opal. This time, Iceman had finally had enough of his bigoted father and rejected his small-minded views, leaving with Rogue. [Uncanny X-Men (1st series) #319]

During the Legion Quest, Iceman was one of the X-Men who went back in time to stop Legion from changing the future by killing Magneto. They succeeded, but only partially. Legion didn't kill Magneto, but instead accidentally murdered Xavier, his own father, years before Legion had been conceived, much less born. This paradox caused the events of the Age of Apocalypse. At the last moment before the original reality ended, Iceman's fellow X-Men, Rogue and Gambit, shared a kiss. When reality resumed, Rogue's mind absorbing touch rendered Gambit comatose. Having absorbed some secret haunting memories, she needed to get away from the X-Men and Iceman volunteered to join her on a road trip, though at the same time he was starting to see visions of Emma Frost. When Gambit awoke from his coma, he tracked them down and confronted Rogue about what she saw in his mind. She broke off their relationship officially and left for good. Iceman and Gambit returned to the X-Men. [Uncanny X-Men (1st series) #322-324, X-Men (2nd series) #45]

Rogue had been there for Bobby during this rough patch with his father and he soon had the opportunity to return the favor to his new friend. After Rogue embraced Gambit in what she thought would be their first and last kiss, she found herself haunted by phantom memories she had plucked from his mind. The kiss left Gambit in a coma. Overwhelmed and confused, she needed to get away from the X-Men and Iceman volunteered to join her on a road trip. Bobby agreed to her strict “no powers” policy during their time away. When Gambit awoke from his coma, he tracked them down and confronted Rogue about what she saw in his mind. She broke off their relationship officially and left for good. Bobby and Remy returned to the X-Men. [Uncanny X-Men (1st series) #322-324, X-Men (2nd series) #45] 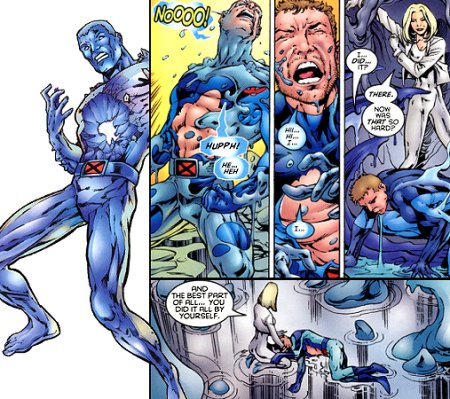 When the entity known as Onslaught first appeared, Iceman was chosen as one of his test subjects, along with Storm, Cyclops and Wolverine. They were pitted against Post, a servant of Onslaught, in a specific battle area of harsh environment to test the extent of their abilities. They won and were returned to the mansion. However, Iceman's chest had been shattered in his ice-form during battle, making it impossible to change back to human form. [X-Men (2nd series) #50] He confronted Emma Frost and demanded to know what she did to his powers while in his body and how to save himself. She refused to help (or at least refused to do the work for Bobby instead of him accomplishing it himself). When he captured her with his ice powers, she telepathically showed him his insecurities. By confronting Opal and his father in her simulation, Iceman realized that Emma was right and managed to transform back to his human body with his chest fully intact. [Uncanny X-Men (1st series) #331] 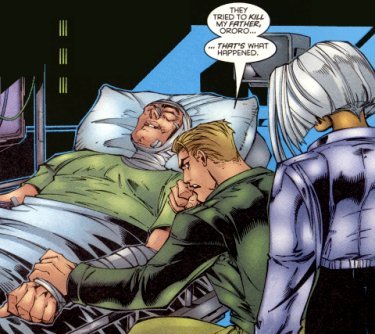 When Graydon Creed ran for president, taking advantage of the Onslaught affair and riding his campaign on anti-mutant propaganda, the X-Men planted Iceman and Cannonball on the campaign staff, under the aliases of Drake Roberts and Samson Guthry. During a live debate between Creed and Trish Tilby, Iceman's father stood up and spoke out for mutant rights, despite the fact that he was constantly at odds with his son about his mutantcy. However, Creed had him investigated and found his connection to "Drake Roberts." Mr. Drake was brutally beaten and Bobby was expelled from the campaign staff. Iceman took a leave of absence from the X-Men to reconcile with his father. [Uncanny X-Men (1st series) #338, 340] 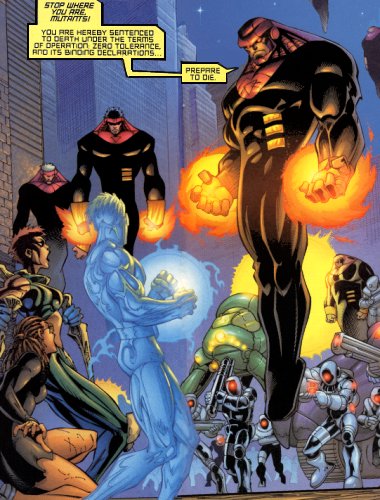 Only a few weeks later, the X-Men were captured by troops of Zero Tolerance. Iceman was forced to return to action, rescuing Cecilia Reyes from Prime Sentinels and recruiting the former Gene National, Marrow and the Mossad agent, Sabra to aid him in opposing their anti-mutant campaign. Bobby was forced to take on a leadership role with this odd collection of mutants. Together, they defeated Bastion and helped to tend the Zero Tolerance program. [X-Men (2nd series) #66-69]

Iceman brought both Marrow and Cecilia to the mansion and helped them a little bit to settle in but opted not to stay with the X-Men. After a short meeting with the other original X-Men in Alaska, he went back to Long Island to care for his father.

Much later, the X-Men found evidence in one of Destiny's journals of a group known as the Twelve, including Xavier, Magneto, Cyclops, Phoenix, Iceman, Polaris, Storm, Cable, Bishop, Sunfire, Mikhail Rasputin and the Living Monolith. They also learned that the Apocalypse’s Horsemen had been kidnapping these mutants from around the globe. Iceman was captured in the woods near his home by Deathbird, who had become the Horseman War. [X-Men (2nd series) #96]

Gathering the remaining Twelve, the X-Men traveled to Egypt and confronted Apocalypse and the Skrulls. Apocalypse and his forces captured all of the Twelve during the battle, using them in a ritual to give the Chaos-Bringer a new body and incredible power. Magneto and Polaris created opposite magnetic polarities, Iceman, Storm, and Sunfire provided elemental extremes, Cyclops, Phoenix, and Cable gave the sheer power of family, Xavier represented the power of mind and Bishop and Mikhail stood for time and space, while the Monolith linked all their energies together. Nate Grey was to be Apocalypse's new host, a powerhouse to store his massive lifeforce. The Twelve managed to free themselves and Cyclops sacrificed his own body and lifeforce to keep Apocalypse from getting Nate. Though the new Apocalypse was defeated, Cyclops seemed lost forever. [X-Men (2nd series) #97] 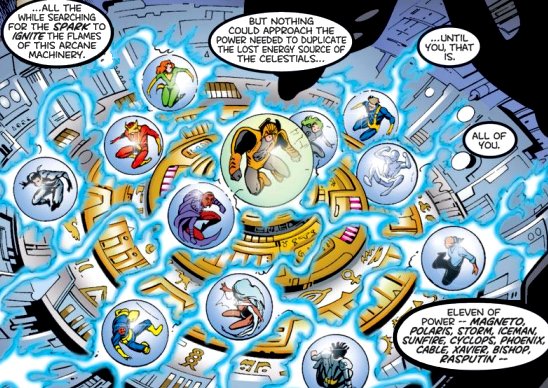 Following that incident, Iceman helped the Beast to secretly enter Genosha, as he wanted to study the legacy-infected mutates. However, when the High Evolutionary released his anti-mutation wave, they were trapped in the war-ravaged country. With the aid of Magneto, they escaped and joined forces with the rest of the scattered X-Men. They raided the Evolutionary's satellite, disabled the mutation field and defeated Sinister, who had been manipulating the Evolutionary. [Uncanny X-Men (1st series) #379, X-Men (2nd series) #99, Uncanny X-Men (1st series) #380] This crisis averted, Bobby returned home once again to take care of his father.