The $64,000,000 question remained: what about adult Bobby? How could young Bobby be gay if adult Bobby was still dating women? With Jean for support, Bobby went to talk to Iceman at the Jean Grey School. Bobby came out to Bobby and asked older Bobby what this all meant. Under pressure, adult Bobby admitted that he was gay as well and the courage of his younger self led the older Bobby to come forward about his sexuality too. [Uncanny X-Men (1st series) #600]

The mutant race faced new conflicts when it was learned the Terrigen Mists were toxic to mutants. The spread of this "M-Pox" as the Terrigen cloud moved over the planet ratcheted up 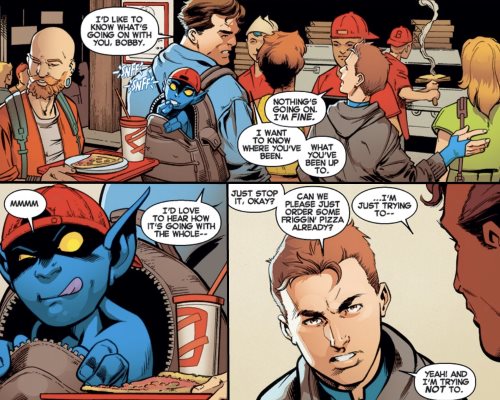 tensions between the X-Men and the Inhumans. Iceman and the others decided to go on vacation, acting as "conscientious objectors" to the rising troubles. Iceman spent some time in Austen, Texas getting to know the locals before hooking up with Hank and the others again. Henry kept pushing for Bobby to talk to him about his sexuality and how he was dealing with it. Bobby didn't want to talk, however... didn't want to burden his friends with the changes he was going through, and was trying to maintain his friendships the way they used to be. [All-New X-Men (2nd series) #1-3]

Therefore, it was actually Bobby's newer friends, Oya and Genesis, who succeeded in getting him to open up. They went clubbing in Miami as Bobby's wingmen, determined to help him "get some digits". The night was awkward and embarrassing for Bobby after several attempts, and he eventually ran out into the alleyway, knocking down a boy named Romeo. This unpracticed 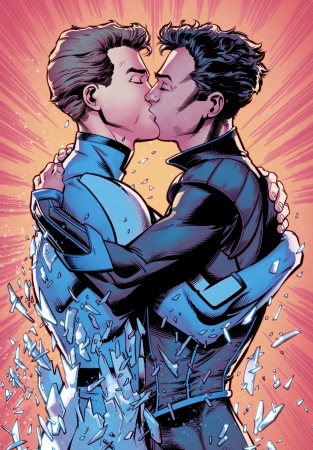 encounter went better for Bobby than any of Oya and Genesis' ploys, although it did become awkward when Iceman learned Romeo was an Inhuman working with the royal family tracking the Terrigen cloud. Despite being on opposite sides of the growing tension, Romeo gave Bobby his number and they started seeing each other. [All-New X-Men (2nd series) #13]

Bobby and Romeo bonded over several dates, spending time with their friends and alone together. By the fourth date, however, Bobby still wasn't comfortable enough to make a move and kiss Romeo. Meanwhile, the Terrigen crisis had reached critical mass and Earth would soon become unlivable for mutantkind if the Terrigen cloud wasn't destroyed. The various X-Men teams planned a pre-emptive strike to disable the Inhumans of New Attilan, and so Bobby was asked to take part in a siege on his boyfriend's home. Although he joined the attack, Iceman's only goal was to find Romeo. Bobby found Romeo's room and finally kissed him before ice-sliding away from the growing conflict with the person who mattered to him most. [All-New X-Men (2nd series) #17]

Having finally found a boyfriend and become comfortable with his homosexuality, Bobby was very put out when Hank suddenly teleported them back into the past. However, it seemed Hank had discovered that the original X-Men no longer needed to return to the past, because they were already there. Hank believed the universe had somehow compensated for their absence, diverging the original five from any need to return and fulfill the lives of the Earth-616 X-Men. They could chart their own path. A relieved Iceman returned to the present and celebrated at a cookout with Romeo and his teammates. [All-New X-Men (2nd series) #19]

After that, Jean assumed command of the team and got them involved with Magneto, where they could both work with the Master of Magnetism and watch over him in case he reverted to villainy. The X-Men moved to a hidden mansion in Madripoor to continue their missions, but the distance proved to be a dampener on Bobby and Romeo's relationship. Romeo ultimately "ghosted" Bobby 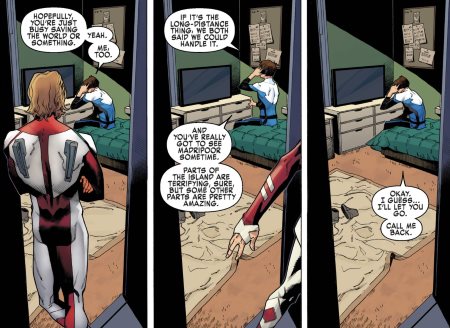 One day, young Bobby got a rather awkward invitation from adult Bobby to spend time with their parents. Adult Bobby had just come out to William and Maddie Drake and, in the process, the Drakes had learned about the existence of a second version of their son in the timeline. Bobby asked Bobby to come along to dinner with their parents. Young Bobby was extremely nervous about dealing with his parents, but things seemed to be going well at first, as the Drakes doted on the teenaged Bobby. Once they offered to let him move back home, though, it was clear the Drakes had an ulterior motive. Adult Bobby, as an out and proud gay mutant, was "lost" to them, but they thought they could start over with young Bobby and "raise him right" this time to get a son they could understand and "be proud of." Bobby and Bobby supported each other in quitting the dinner after that, and standing up to his parents finally gave young Bobby the confidence he needed to call Romeo and tell him off for ghosting him. [Iceman (3rd series) #8]

Iceman and the X-Men soon learned the "original X-Men" they saw in the past were a lie. The Brotherhood from the future had gone back in time and posed as them in order to shape the timeline to their own selfish desires. Time started to break down and rewrite itself as a result and the X-Men only barely managed to reverse the effects. The original five were again forced to confront the fact that returning home eventually was the only way to preserve the timeline. [X-Men: Blue #16-20]

The original five started wrapping up their affairs, preparing for the eventual trip back in time and the memory loss they would have to go through to make things right. Bobby was the most unsettled by the idea, knowing he would have to go back into the closet, living a lie again. He spent some time talking to his older self about his problems. Adult Iceman assured him that he would never have come clean about his feelings if young Iceman hadn't confronted him. Bobby had to make peace with what the next few years would mean, knowing he would eventually be able to live openly again. [X-Men: Blue #35-36] 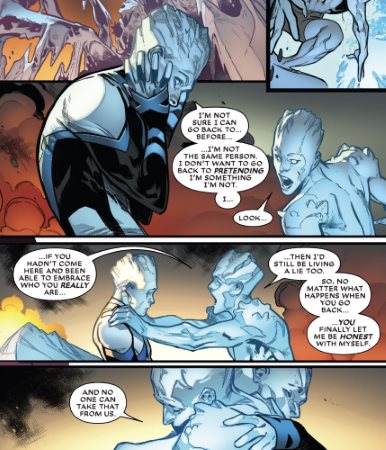 Before the original five went home of their own accord, however, a teenaged version of Nathan Summers kidnapped Bobby to force them back into their proper time. Ahab the Hound master originally killed young Bobby, forcing a paradox on the X-Men's timeline. Kid Cable intercepted Bobby first, and planned to send them all back. The original X-Men were forced to complete the time loop at haste in order to prevent Ahab and his Hounds from propagating in the present. Bobby had an emotional good-bye with other Bobby and joined his friends as they returned to the past. Jean used a psychic memory trick she learned from the mutant girl Manon to suppress their memories until Ahab's attack and, with that, the X-Men's adventures in the future were gone and forgotten. [Extermination #1-5]

Bobby possibly lost the most of all the original five X-Men by returning to the past. The memory wipe forced him back into the closet and so he continued pursuing Zelda from the Go-Go. His Omega-class mutant potential also reset to zero, and he had to relearn his powers beyond the 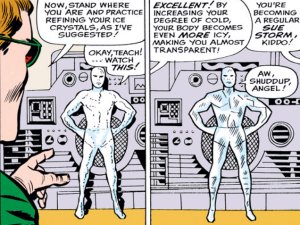 production of snow and slush. Iceman had learned early in his career how to create a layer of frictionless ice on the floor to propel himself forward easier than running on his own. [X-Men (1st series) #2] With time, Bobby imagined new ways to sculpt his ice into ramps and platforms, before eventually creating his patented “ice-slide” that would be his trademark for years to come. These ice-slides were so skillfully formed that it almost seemed as if Iceman could defy gravity atop them. [X-Men (1st series) #10]

Despite a few missed opportunities due to being called away for a mission, Bobby soon started dating Zelda regularly. Once they introduced Hank to her friend Vera Candor, the foursome frequently went on double dates. [X-Men (1st series) #19]

After their first battle with the Sentinels, the X-Men were all injured to varying degrees. Iceman was worst of all, falling into a temporary coma as the doctors were unsure how to treat his mutant physiology. Iceman’s condition was almost a blessing in disguise, for as the weary X-Men returned to the mansion one by one, they were each captured in turn by the waiting Magneto. Soon Iceman was the only X-Man left free and he fought Magneto on his own to prevent the mad villain’s mutant machine from creating an army of super-powered minions. Iceman was no match for Magneto in a sustained battle, but he held his own long enough for Professor Xavier and the others to free themselves from Magneto’s trap. [X-Men (1st series) #17-18]

As time passed, Iceman and the strangest teens of all began to grow up. Bobby celebrated his 18th birthday with Zelda and the team at the Café A-Go-Go. [X-Men (1st series) #32] The team battled many more super-villains such as the Super-Adaptoid, Cobalt Man, and Factor Three before Xavier granted them each a new costume designed by Jean to express their individuality. [X-Men (1st series) #39] Not much later the team was disbanded by FBI agent Fred Duncan after Xavier was seemingly killed in a battle with the subhuman Grotesk. Iceman and Beast remained in New York, where they got into a brawl with their old foe the Maha Yogi during a magic act double-date with Zelda and Vera. [X-Men (1st series) #46-47]