As per her obsession with giri and samurai honor, Yuriko practiced the way of the samurai, quickly becoming an adept warrior. She renamed herself Lady Deathstrike and donned a suit of samurai armor and a samurai sword. Believing Bullseye was the only living recipient of her father’s Adamantium-bonding process, Lady Deathstrike traveled to the United States to find the man, using a special device of her father’s that tracked the energy signature given off by Adamantium-bonded bones. As she flew over the continent, the device picked up a signal, which Deathstrike followed. To her surprise, the man it detected was not Bullseye, but a man whom she had previously only heard rumors about—a man named Wolverine. 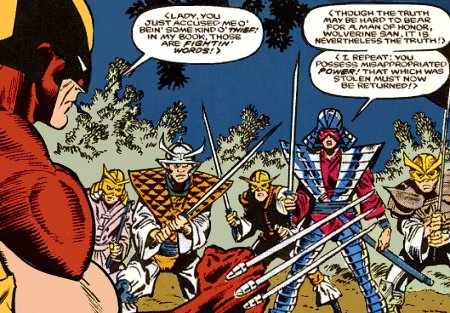 Lady Deathstrike wasted no time in attacking this man whom she believed had stolen her father’s research. She confronted him in battle and repeatedly accused him of being thief. She explained that he must have been the recipient of the research Weapon X had stolen from her father, and that she needed to reclaim his bones to recover her father’s work. To this end, she brought with her an army of her father’s samurai warriors, who now followed her in his stead. Her accusation of thievery annoyed Wolverine so much that he desperately wanted to kill her to reclaim his honor. They fought and, although Lady Deathstrike possessed one of her father’s indestructible samurai swords, her fighting skills were not on par with Wolverine’s. He would have easily defeated her, had not Alpha Flight’s Puck accidentally crashed into him with a low-flying airplane. Deathstrike moved in for the final blow, but found herself having to face Alpha Flight’s Vindicator, who bore a special suit of armor also invented by Department H and against which her sword shattered. Her chances of success ruined, she slipped away, postponing her plans for another time. [Alpha Flight (1st series) #33-34] 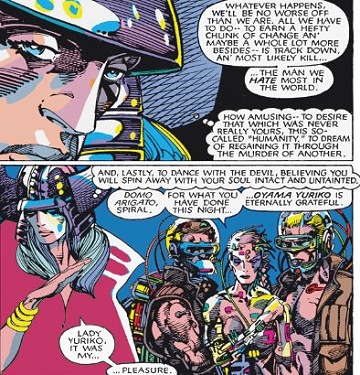 Realizing she would not be able to defeat Wolverine and fulfill her father’s legacy in her current state, Yuriko teamed up with three other men who wanted revenge against Wolverine—Cole, Macon and Reese, three Hellfire Club guards whom Wolverine had sliced up during a conflict with the club—and the four of them struck a deal with the space-time twisting sorceress Spiral to receive upgrades to their bodies. Using the magic and technology at her disposal, Spiral transformed Lady Deathstrike into a cybernetic organism, outfitted with an Adamantium skeleton and extendable Adamantium claws. Now essentially a “magic cyborg,” Deathstrike and her peers sought to slaughter Wolverine. With their new enhancements, this quartet of cyborgs ambushed Wolverine one night during a snowstorm in New York City. The element of surprise allowed them to savage Wolverine, bringing him to the brink of death. However, he managed to slip away and recover, after which he took out Cole, Macon and Reese one by one. Finally, as he and Lady Deathstrike faced off in the snow, Wolverine scolded her for selling her soul to the devil and giving up her humanity in order to murder him. Once again, he defeated her, ripping her new, cybernetic body to shreds. She begged for him to end her life, as her quest for vengeance would never end as long as she lived. Wolverine refused to grant her that mercy and left her dismantled body in the snow. [Uncanny X-Men (1st series) #205] 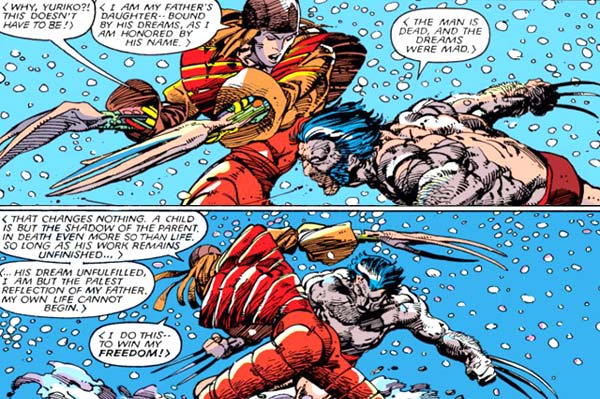 Undeterred, Yuriko, along with Cole, Macon and Reese, later joined up with Donald Pierce, the Hellfire Club’s renegade White King and a fellow cyborg, to get vengeance on Wolverine. Incidentally, around this time, the X-Men had expelled a group of cybernetic pirates called the Reavers from their headquarters in an abandoned town in the Australian Outback. Somehow, Pierce made contact with Bonebreaker, Pretty Boy and Skullbuster, the survivors of the X-Men’s raid, and recruited them as well. They figured they had a better chance getting revenge on Wolverine if they worked as a team. They began staking out the X-Men at their headquarters in the Australian Outback. [Uncanny X-Men (1st series) #247-249] 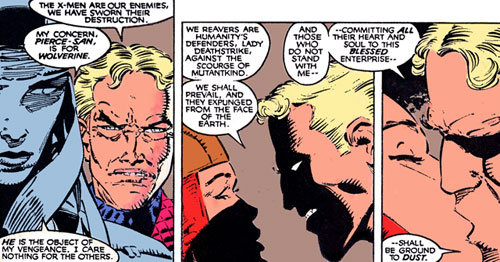 Although Lady Deathstrike had similar goals to the Donald Pierce and the Reavers, their motivations were quite different. She came from Japan’s noble class, whereas the Reavers were nothing more than barbaric pirates. She was motivated by her sense of honor, whereas the others were motivated by simple revenge or, in Pierce’s case, hysterical, anti-mutant fanaticism. They did not always make for good bedfellows. For instance, while staking out the X-Men one day before they made their move against Wolverine, they got into a conversation about what was to be done with the rest of Wolverine’s X-Men teammates. Lady Deathstrike reminded Pierce that her grudge was with Wolverine and Wolverine alone; she had no beef with the rest of the X-Men and saw no need to kill them as well. Pierce vehemently disagreed, as he viewed all mutants and enemies of mankind, and his Reavers as mankind’s protectors. Pierce bookended his little speech to Yuriko by grabbing her and planting a kiss on her lips. [Uncanny X-Men (1st series) #247-249] 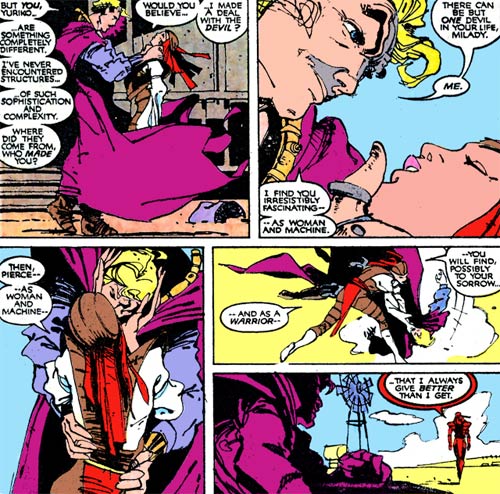 It is unclear whether Yuriko invited Pierce’s repeated sexual advances, or merely tolerated them. He was degrading to her, sometimes insinuating that he held her back from dangerous missions so she could satisfy his more prurient needs. However, at one point she started wearing his robes around their headquarters, implying she was willing to be intimate with him. Whatever the case, his passes at her were not the only repulsive behaviors exhibited by the Reavers that Yuriko had to endure. While searching for signs of life within the Outback, she also found herself having to fend off sexual advances from Pretty Boy. As if this were not gross enough, he also tried to forcibly reprogram her mind with his cybernetic tendrils. Lady Deathstrike shoved him away and informed him she was not some plaything he could mold to his whims. [Punisher (2nd series) #33, Uncanny X-Men (1st series) #252-253]

In addition to having to fight off her male peers who attempted to use her as a sex object, Deathstrike also took it upon herself to uphold the honor of her gender by correcting the sexist assumptions of the Reavers. When the Punisher’s accomplice accidentally tapped into the Reavers’ computer network, Donald Pierce sent a squad of three men to eliminate him. When Pierce assumed that the formidable warrior they were tracking was a man, Deathstrike corrected him and asked how he knew their target wasn’t actually a woman. [Punisher (2nd series) #33-34] 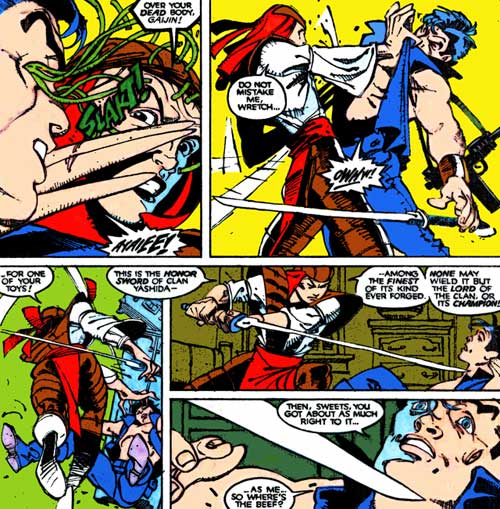 Yuriko also rebuffed Pretty Boy when he raided Wolverine’s bedroom and attempted to take the Honor Blade of Clan Yashida for himself. Snatching it from him, she told him he was not worthy of holding a blade of such nobility. One afternoon, while the rest of the X-Men were away on a mission, Deathstrike and the Reavers hid inside their base, and ambushed Wolverine when he returned home from a solo mission. He stood no chance against the eight of them. After they beat him into submission, they crucified him in front of the town and left him to roast for days in the hot desert sun. Somehow he escaped, and the Reavers began hunting for him. When Deathstrike discovered where had hid while he recovered, she chose to leave the Honor Blade of Clan Yashida there. She intended for Wolverine to find it after he slew her, or for her to retrieve after she slew him. Either way, her reverence for the blade was clear, as was her adherence to the honor customs of the samurai. [Uncanny X-Men (1st series) #251-253)] 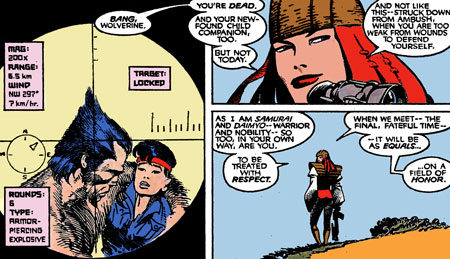 This was further exemplified when Pierce ordered Deathstrike to monitor the periphery of the town to catch Wolverine and his companion Jubilee if he tried to escape on foot. Lady Deathstrike reported back that they were nowhere to be seen—when, in fact, she had them in the sights of her sniper rifle. She could have easily killed them both, but her honor as a samurai and a daimyo prevented her from killing a weakened foe in such dishonorable a manner. She didn’t tell Pierce that she let them get away. [Uncanny X-Men (1st series) #253]

With Wolverine gone, the Outback town once again belonged to the Reavers. This also gave them access once again to Gateway, the silent, Aboriginal mutant who resided near the town and whose mutant powers allowed him to teleport people anywhere they wanted to go. The Reavers later deduced that Wolverine’s likeliest destination after escaping was the research station on Muir Island that Professor X helped create, and which was run by Banshee and Moira MacTaggert. They ambushed the island, killing its inhabitant Sunder with their initial attack wave. When the government’s mutant affairs team Freedom Force intervened, the Reavers made quick work of them too. Lady Deathstrike eviscerated Avalanche on the battlefield, while Donald Pierce executed Stonewall. They had to flee when Forge fought back and killed Skullbuster with his sniper rifle, but the Reavers took solace in knowing they dealt the Muir Island X-Men allies a heavy blow. [Uncanny X-Men (1st series) #254-255]

Lady Deathstrike accompanied Pierce when he recruited a new candidate for the Reavers: Cylla Markham, a friend of the X-Men Banshee and Forge whose body had been almost completely destroyed in a plane crash. Deathstrike observed as Pierce offered to rebuild her better than ever before, a prospect to which Cylla agreed enthusiastically. [Uncanny X-Men (1st series) #261] 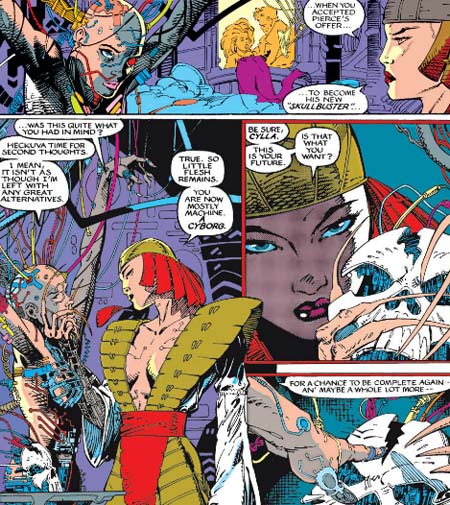 While Pierce was working on building a new body for the debilitated Cylla Markham to replace Skullbuster, Lady Dee spoke with the crippled woman in the laboratory. She attempted to dissuade her from following the same path she had by asking her if this is the life she thought she was getting when she agreed to Pierce’s deal. Cylla told her that she would do anything to get her body back and get back on her feet (and in the sky again)—even if it meant making a deal with the devil himself. Surely Yuriko empathized with Cylla’s feelings, even if they did evoke pangs of pity in her. [Uncanny X-Men (1st series) #269]