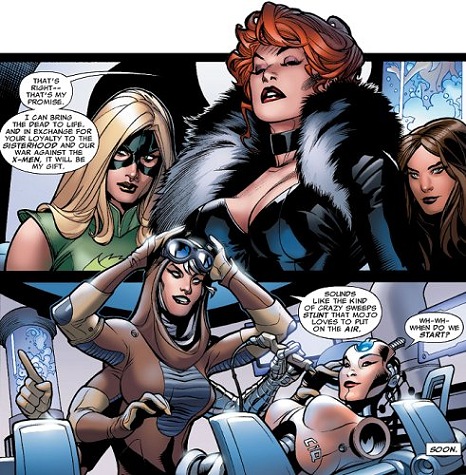 Lady Deathstrike was in bad shape after the fight with X-23. This time, she was unable to repair herself. Somehow, she made contact with her original creator, Spiral, who took her back to the Body Shoppe and started working her magic. Deathstrike was being rebuilt when a woman calling herself the Red Queen arrived with a proposition: if they came to work for her to help her retrieve something from the X-Men, she would resurrect one person dear to each of them. Both Spiral and Yuriko accepted the offer. Although it was never stated whom Deathstrike intended to resurrect, she would have presumably opted to revive her father, Lord Dark Wind, in order to relieve her burden of having to fulfill his life’s work. 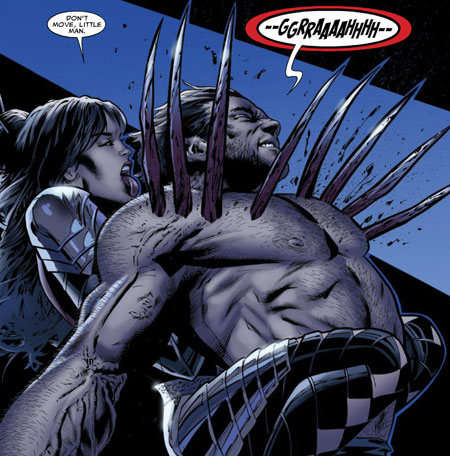 Now fully repaired, Lady Deathstrike and the Sisterhood raided Kwannon’s grave in Japan, swapped her consciousness with Psylocke’s, and ambushed the X-Men at their home in San Francisco. Their mission was to retrieve a relic Wolverine was keeping, and Deathstrike relished the opportunity to plunge her claws into Wolverine’s lungs. Deathstrike’s behaved uncharacteristically subservient throughout this ordeal, perhaps due to the debt she owed Spiral: she referred to both Spiral and the Red Queen as “mistress,” and followed their orders diligently. After the Red Queen retrieved what she was looking for, the Sisterhood teleported to New York City so the Red Queen could transfer her essence into the dead body of Jean Grey. The X-Men foiled the Red Queen’s plans, however, causing the Red Queen’s essence to dissipate into the ether. With their mistress dead, Spiral and her “magic murder doll” fled through one of Spiral’s portals. [Uncanny X-Men (1st series) #504, 508-511]

After the incident with the Red Queen, Lady Deathstrike reconnected with the Reavers and reclaimed their old base in the Australian Outback, where they plotted revenge against Wolverine and mutantkind. Realizing that she would likely never succeed in killing Wolverine, Deathstrike instead decided to stifle his spirit by humiliating him and bringing him to the lowest level possible. To this end, she and the Reavers decided to blow up the island of Utopia and kill most of the world’s remaining mutants. They laid a trap for Wolverine’s X-Force and lured them to their headquarters in the Outback, at which point Skullbuster detonated a suicide bomb that maimed Fantomex, Deadpool, and Wolverine. With those three heavy hitters out of the way, two of the remaining Reavers made their suicide run on Utopia, by way of Gateway. Unfortunately for them, Psylocke and Archangel prevented them from succeeding. Meanwhile, Deathstrike made mincemeat of the battered Wolverine, elegantly carving up his body in a manner that kept his senses disabled. However, Wolverine managed to douse Deathstrike with kerosene and light her on fire. 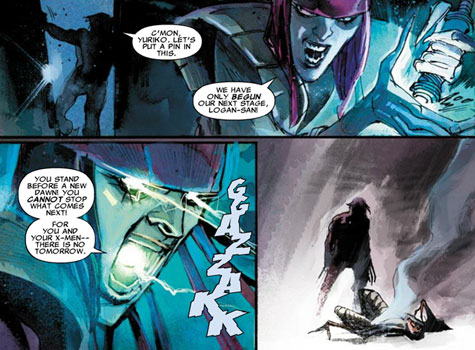 Although her cybernetic body no longer permitted her to feel pain in the traditional sense, Deathstrike vividly remembered what it felt like to burn, and fled in terror. She made it to the Reavers’ computer and uploaded her consciousness into the system before Wolverine found her, moments before her body expired. Just before she fled, however, she left Wolverine with an ominous forewarning. "You stand before a new dawn," she told him. "You cannot stop what comes next! For you and your X-Men—there is no tomorrow." [Uncanny X-Force (1st series) #5.1]

What, exactly, Deathstrike was warning Logan about was unclear at first, as she soon became involved with several different schemes of varying magnitude. There was her alliance with Doctor Octopus and the Sinister Six, who plotted to extort the world out of billions of dollars in exchange for not destroying its protective ozone layer. Deathstrike’s role in this was to defend one of their satellite stations in Australia from overzealous superheroes.

When the Australian hero Kangaroo, acting on Spider-Man’s orders, arrived at the station she was defending, Deathstrike nonchalantly decapitated him, calling his mere presence a dishonor to her abilities as a warrior. [Amazing Spider-Man: Ends of the Earth #1]

There was also her newly formed alliance with two of Wolverine's recently resurfaced enemies, Sabretooth and Mystique, 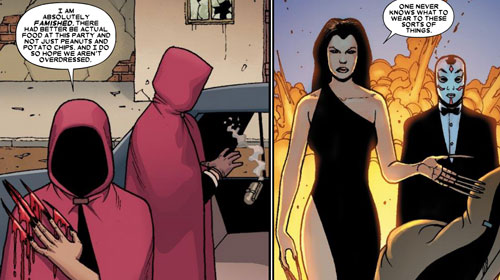 whose welcoming party she attended alongside a mysterious masked assassin known only as Lord Deathstrike. Deathstrike didn't exactly trust Sabretooth due to his behavior during their previous alliance, but she agreed to meet with him and hear him out anyway. Incidentally, while making conversation with Lord Deathstrike in the car, Yuriko referred to him as "dear brother," suggesting that maybe both of her siblings had not died in her father's service after all. However, it soon became clear that her message of certain doom referred to to something far more devastating than either or those two schemes—something that would impact all of humanity.[Wolverine (2nd series) #304]

When she resurfaced next, Lady Deathstrike had an unprecedented motive for her actions—unprecedented for her, at least. At some point during her lifetime, over the course of her many technological upgrades, Yuriko must have stopped identifying as a human being, and started identifying as a machine. This is hardly surprising; despite the fact that she still retained her original personality and “essence,” she now inhabited completely artificial bodies she could shed when they were no longer useful.

It was with this mentality that Deathstrike and the Reavers connected with the Descendants, a robot cult led by a man known only as Father. This cult originated shortly after the original Human Torch, an android, was created during World War II. There were, in fact, 20 copies of the Human Torch that were never seen by the public, but who were brought to life thanks to the arcane magic of the Orb of Necromancy. These Human Torch duplicates proliferated among mankind, living in secret, completely undetectable to their peers. Over the years, Father recruited these replicas of the Human Torch, along with other artificial intelligence, into a secret society of artificial lifeforms called the Descendants. The Descendants believed that kickstarting human evolution by helping humans merge with machines would elevate humans to a higher, more evolved form of life. They eagerly awaited the day that a machine

would successfully breed with a human and create a new, hybrid lifeform. Until that day came, they lay dormant, waiting for other latent “descendants” who still lived amongst the humans to be activated, at which point they recruited them to their secret world.

They eventually recruited a latent descendant—a woman—whose powers activated when the life of her child was in danger—a child who may have been the predestined human/robot hybrid. However, their retrieval of her caught the attention of the Avengers, who then invaded their secret city. The Descendants had little trouble repelling their invasion.[Secret Avengers (1st series) #22-25] 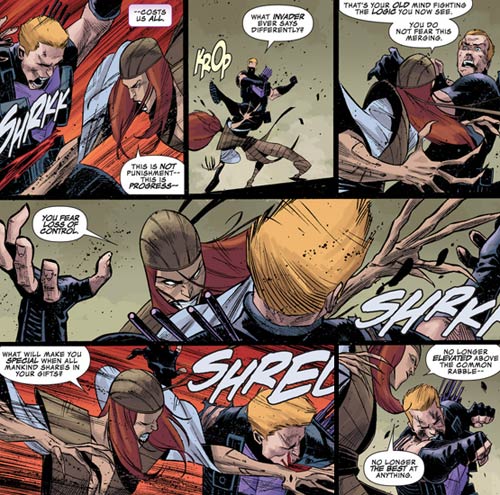 With the human-robot hybrid child signaling that their time had come, Lady Deathstrike and the Descendants initiated the next phase of Father’s plan to evolve humanity to its next level—a level marked by immortality, perfect memory, peace and pristine health—by infecting mankind with transformative nannites. Lady Deathstrike and the Reavers helped Father declare to the world what he intended to do, and he began by infecting delegates at the United Nations. From there, they began to activate the nannites worldwide. The remnants of the Avengers teamed up to stop them. Deathstrike and her fellow associates fought back and nearly overpowered the Avengers, while Deathstrike herself boasted to her opponent that their plan would soon render superheroes irrelevant by elevating the rest of mankind to their level. In the end, however, the original Human Torch had a change of heart and destroyed the Orb, ending the lives of all its mechanical descendants, and destroying the nannites before their infection spread worldwide. [Secret Avengers (1st series) #33-37]

It is unknown, however, what happened to Lady Deathstrike. Since she was presumably assimilated into the Descendants collective, that particular body may have died at when the Orb was destroyed. For her, however, death is not quite so simple. Yuriko existed both prior to and independently of meeting the Descendants, and although she is, like them, a product of science and magic, both the science and the magic in her case are Spiral’s. Additionally, she undoubtedly has backup consciousness stored elsewhere that could have automatically activated upon her death. Lady Deathstrike will not perish so easily—and, as long as a backup copy of her exists somewhere, she might not ever truly die. Neither she nor her enemies have been known to be so lucky.