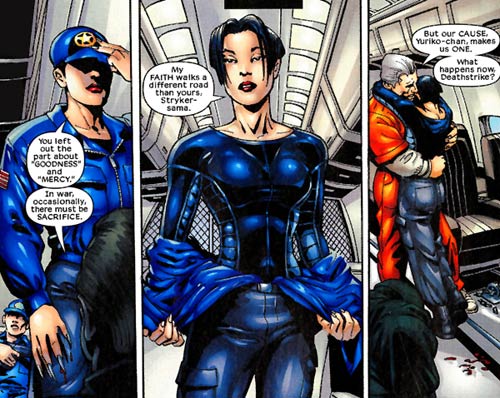 Throughout her life, Yuriko Oyama presumably stayed in contact with her family’s old friend, Reverend William Stryker. Long after he was arrested for attempting to commit genocide against the mutant population of the entire world, and for trying to shoot the mutant girl Kitty Pryde on global television, the good reverend reformed in prison and began ministering to inmates. During one of his trips back from ministering to a man on death row, Yuriko, disguised as one of the pilots, sneaked aboard his plane and staged a daring, mid-air rescue that took the lives of everyone on board—except for hers and Stryker’s. After she and Stryker bailed out of the plane, they tracked down Kitty Pryde and took her captive, as Stryker had a need for her unique abilities. With Kitty safely captive, he resumed monitoring Mount Haven, a hidden town in Washington filled with mutants. When he asked Deathstrike for an update on their reconnaissance, she jacked into their computer system to observe, using her fingers to interface with their computer. She quickly discovered that their undercover agents had been murdered by Mount Haven’s guardian, an entity called Paul, who then reprogrammed her to attack her master. Once Deathstrike disconnected from the network, she found herself unable to control her actions, and watched in horror as her body tried to eliminate Stryker. With the help of the captive Kitty Pryde, Stryker housed both Kitty and himself in the Oyama Industries-produced Adamantium Mandroid armor and phased away to safety. [X-Treme X-Men (1st series) #25-26] 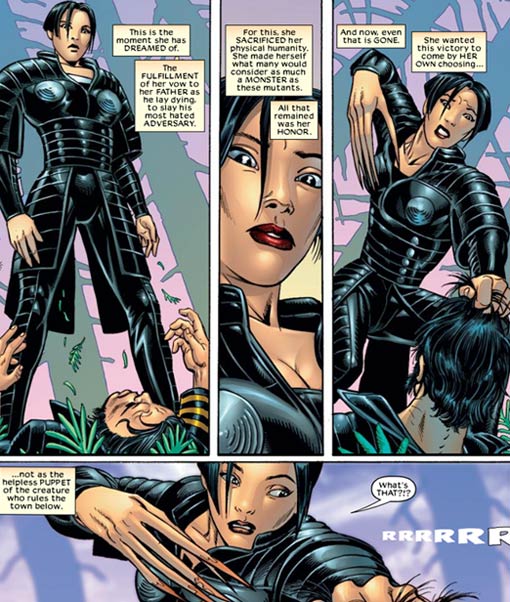 Now under the control of Paul, Lady Deathstrike was forced to defend Mount Haven from attackers—namely, the X-Men. Yuriko fought Wolverine outside of Mount Haven, and actually defeated him in battle, stabbing him through the heart. However, because her actions were not her own, she considered it an empty victory. Deathstrike later became Paul’s only way of uploading himself onto the Internet—the key to spreading his dominion worldwide. However, when Kitty disrupted Paul’s systems and freed everyone infected with nannites from his control, his plans were foiled, and Yuriko was freed as well. She slipped away, unnoticed. [X-Treme X-Men (1st series) #27-30]

After she recovered and once again repaired herself, Lady Deathstrike’s increasingly advanced computer systems detected that her memories contained an inexplicable blind spot. Her CPU managed to repair and reconstruct the missing memories and, when it did, Deathstrike remembered that Sunfire, Mystique, Rogue and a mutant girl called Blindspot had once attempted to steal her father Lord Dark Wind’s Adamantium-bonding process. Yuriko assumed they had succeeded and vowed to get revenge. She tracked down the elusive Blindspot, captured her, and exploited her memory-removal ability to ensnare the rest of her enemies. She orchestrated a news leak to the media of a photo showing Sunfire, Mystique and Rogue on a boat after they attacked Dark Wind’s warehouse. For a national hero like Sunfire, this was a scandal, and he sank into a deep depression. When Rogue reached out to help him, as Deathstrike hoped would happen, he invited her to Japan. Lady Deathstrike boarded the plane that was supposed to retrieve Rogue in the United States and ambushed her as soon as it landed. Rogue, however, narrowly escaped the surprise attack, and managed to take control of the plane and fly it to Japan herself. 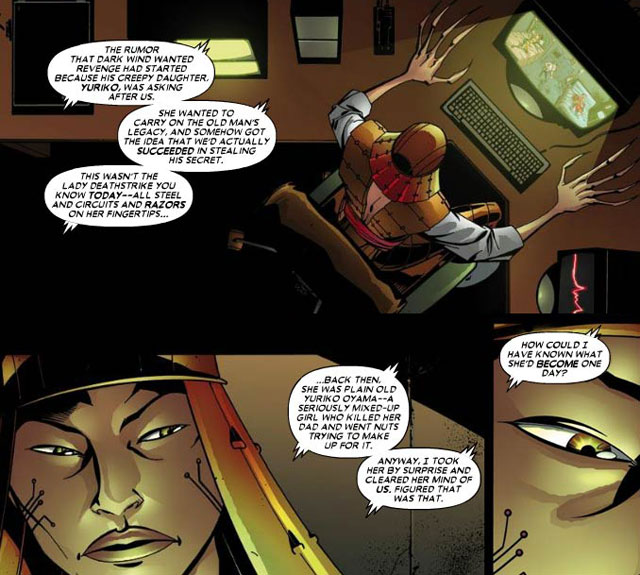 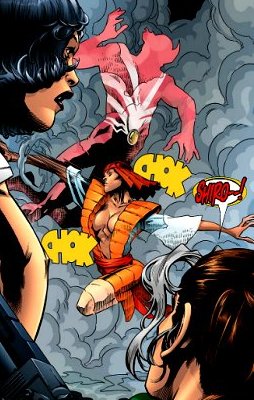 Yuriko was ready for Rogue and Sunfire when they next attacked, and in the ensuing battle she sliced off both of Sunfire’s legs. After taking Rogue captive and reuniting her with Blindspot, Deathstrike learned that they hadn’t actually succeeded in stealing her father’s secrets. She needed nothing more from them—but refused to let any evidence of her atrocities survive. When she moved to kill them, however, Rogue absorbed the totality of Sunfire’s psyche and powers, leaving him comatose, and fought back against Yuriko. Lady Deathstrike found that she was no match for Rogue and fled in terror, but Rogue was relentless and scorched her nearly to death in the streets of Japan using her borrowed powers. Only the intervention of the X-Men saved Yuriko’s life. As usual, she slipped away unnoticed amidst the confusion to lick her wounds. [Rogue (3rd series) #7-12]

Deathstrike was recruited into Tony Stark’s New Thunderbolts during the Superhero Civil War and helped subdue renegade superheroes who refused to register for the Superhuman Registration Act. She helped in the attack on Spider-Man, and was present in Project 42, a prison in the Negative Zone, when the superheroes staged their final rescue attempt. In the final battle, she once again battled her old enemy Captain America. After Captain America surrendered, however, and the conflict ended, Deathstrike and the rest of her villainous team members were detained in the Negative Zone. [Civil War crossover]

Before he had died, Deathstrike's old mentor, the Reverend William Stryker, had told her earlier in his life that he would have need of her once more after his death. When that event finally came to pass, she was honor-bound to do his final favor: eliminating the mutant baby born after M-Day, whom he considered the antichrist. After somehow escaping from her prison in the Negative Zone, Deathstrike reconnected with the Reavers and hooked up with Stryker’s Purifiers. They were at their base of operations in a church in New York City when the New X-Men infiltrated, seeking vengeance for their friends whom Styker’s Purifiers had previously murdered. Deathstrike and the Purifiers caught the intruders in the act and attacked them. During this brief battle, Yuriko impaled the mutant teenager Julian Keller with her claws. She and the Reavers would have killed the rest of them had they not escaped. 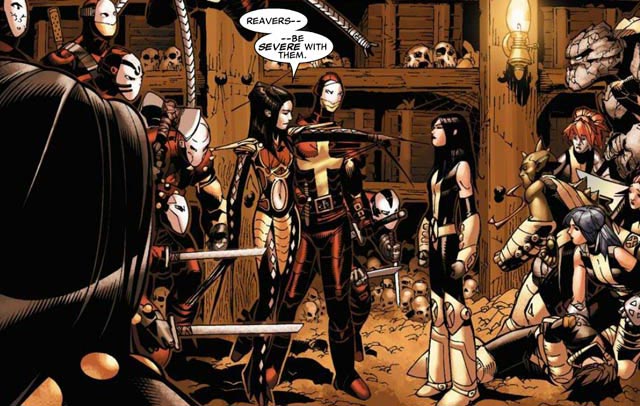 In keeping with her vow to Stryker, Yuriko and the Purifiers hunted down the missing messiah baby, who was currently in the care of the X-Man Cable. They confronted him in the snowfields of Canada, where Deathstrike attempted to kill them. She got the upper hand on Cable and had him weakened, cornered, and defeated. Before she could deliver the coup de grace, however, Cyclops’s makeshift X-Force team arrived and intervened. Cable slipped away during the ensuing battle, while Deathstrike found herself having to face not only her old nemesis Wolverine, but someone else who hated her possibly even more than he did: Wolverine’s female clone X-23, who was deeply in love with the young man Yuriko had just impaled. During the ensuing confrontation, and Deathstrike found herself out-strategized by the hardened killer. After X-23 severed the cybernetics in one of Yuriko’s arms, she gutted her and left her to die, telling her she was dead the moment she laid a hand on Julian Keller. [Messiah Complex crossover]