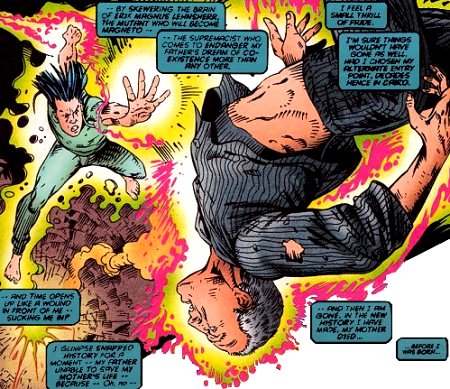 In the alternate reality depicted in What If? (2nd series) #77, Legion succeeded in his attempt to murder Magneto and pave the way for his father's dream of peaceful coexistence between mutants and humans. Rather than travel back to the period where Xavier and Magneto were friends, Legion arrived at the point in time when a younger Magneto was fleeing the Nazi concentration camp where he had been interred. Upon killing Magnus, Legion created a time paradox that prevented his own conception and birth. Without Magneto, Xavier never managed to save Gabrielle Haller and she died. Xavier went on to form the X-Men but without Magneto as a counterpoint, they never honed their skills and instead became media celebrities in a world that adored them. However, when Apocalypse attacked the X-Men were too inexperienced in combat to defeat him and his followers. Xavier sacrificed himself to stop Apocalypse. Sadly, the revelation that there were evil mutants and the loss of Xavier as a spokesperson led to a sudden change in the political and social landscape. Mutants now found themselves hated and feared for the first time.

A future version of Legion was depicted in Fantastic Four (3rd series) #16. The Fantastic Four were summoned to this alternate future by that timeline's version of the sorceress Margali Szardos. Margali was working in tandem with what appeared to be the disembodied psyches or spirits of Legion and Destiny. Little was revealed about this version of Legion except that he and Destiny had joined Margali in her interdimensional home in Limbo to form this team of Defenders. Together, the trio used Destiny's predictions to guide them in safeguarding the Earth from a variety of threats. The combination of time-travel, Limbo, future predictions, and cryptic portents make it difficult to discern the true nature of this strange alliance and to place it temporally. However, taken together Margali's comments strongly imply that they were operating from the Kree-dominated future timeline she brought the FF forward in time to save. 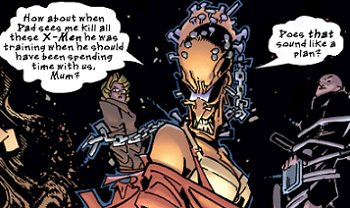 In the Ultimate Universe, Charles Xavier has a son named David whose powers left him hospitalized for much of his young life. However, this is where the similarities to Legion end. David Xavier's mother is Moira MacTaggert (not Gabrielle Haller) and his powers and history bear a much stronger parallel to that of Proteus, the son of Moira and Joe MacTaggert in the 616 reality. Proteus' powers manifested when his father abandoned him and his resentment towards Charles Xavier prompted a killing spree and vendetta against the X-Men. After possessing Betsy Braddock, he was killed by Colossus. This is a rare case where elements of two characters from the 616 reality were seemingly combined in the Ultimate Universe.