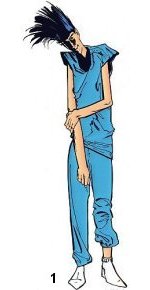 1) Having spent most of his young life in a catatonic state, David usually wore clothes befitting a patient - loose-fitting garb such as hospital scrubs, T-shirts and sweatpants. [New Mutants (1st series) #26]

2) While operating on Muir Island, the many residents took to wearing variations of the classic black and gold X-Men uniform. Legion was shown wearing this on at least one occasion. [Uncanny X-Men #259]

3) During the Age of X reality warp, Legion was a celebrated member of the Force Warriors. He wore a simple and revealing outfit consisting of black leather pants with lighter colored padding and various loose straps/belts. He also wore heavy black boots and a studded leather wristband. David was shirtless, displaying his more defined and adult physique. His normally untamed hair was now a more styled mohawk. [Age of X]

4) In his own series, X-Men: Legacy, David assembled an ad hoc costume that would be his standard look throughout the series. He wore a set of simple orange sweatpants at the Tibetan retreat. After an unintentional rampage through China caught the military's attention, David appropriated a vest/jacket from his pursuers. This jacket was a sleeveless black design with red stripes on the front and a high collar with red on the inner fabric. Legion modified this look in small ways over the course of his series, but the basic features remained. [X-Men: Legacy (2nd series) #2]