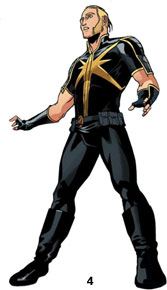 1) Longshot originally wore a black collared jumpsuit with an eight-pointed white star on the right side of his chest. He also wore black boots and a brown bandoleer slung over his left shoulder, along with a pouched belt, small dagger, and a leather bag. Later on, the color scheme would change ever so slightly, with a yellow star emblazoned on a dark blue costume. [Longshot #1]

3) After the team moved to Detroit, Longshot altered his look slightly. He still wore a black bodysuit but now he had a yellow trim and star on it and the collar was much smaller than his previous look. He also ditched the bandoleer in favor of storing his knives in small pockets lined on the outside of his sleeves. He finished off the look with a thin, black belt, complete with patches and a circular buckle with an X on it. Upon leaving X-Factor, he kept the same costume but dropped the pouches on the arms. He still kept the paneling there but chose to keep his knives in a bandoleer concealed under his shirt. [X-Factor (1st series) #200]

4) After battling the In-Betweener and restoring the universe, Longshot ended up with a new costume. His black bodysuit now had a large yellow star in the center of his chest and another in the center of his back. His sleeves stopped just before the elbows and he wore long fingerless gloves that stretched up his forearms. He still wore his usual black belt with X buckle on it. The soles of his black boots had a yellow star on each of them. [Longshot Saves the Marvel Universe #4] 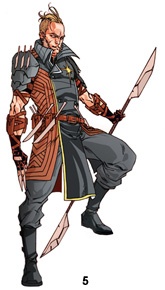 5) When Longshot faced off against the all-new X-Factor, he underwent a relatively major costume change. His new look adapted elements of his regular look with a Japanese-samurai aspect to them. He kept the black top and pants with a small yellow star on his chest but wore brown boots, fingerless gloves and shoulder guards with slots for knives. Down the sides of his torso his costume had brown hatching that complemented the numerous brown straps that wound around his arms (which held even more knives). He wore a belt adorned with pouches and slots that could hold even more blades. To finish this ensemble off, he armed himself with a dual-bladed pole. [All-New X-Factor #16]