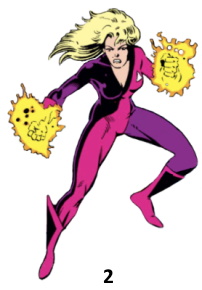 1) Upon joining the New Mutants, Magma was given the standard X, blue and gold uniform that next to every student at Xavier’s school wore in training. [New Mutants (1st series) #13]

2) After their traumatic experiences at the Beyonder’s hands, Magma and the other New Mutants were sent to Emma Frost for help and briefly joined their Hellions and wore their typical uniform: a tight, v-necked suit in two shades of magenta with a white triangle symbol over the heart. [New Mutants (1st series) #39-40]

3) On some occasions, the New Mutants wore a set of graduating costumes that Xavier had designed for them. Once, it was because Mojo had reduced the X-Men in age and the younger team temporarily became the X-Men in their stead. Another time, it was when they battled the Hellions in public without Magneto’s permission. Magma’s uniform was of orange and yellow color and contained some goggles to better shield her eyes from her own power effect. [Uncanny X-Men Annual #10, New Mutants (1st series) #54-55]

-) Having transferred to the Massachusetts Academy, Magma had to wear the standard uniform of the Hellions yet again. [New Mutants (1st series) #62] 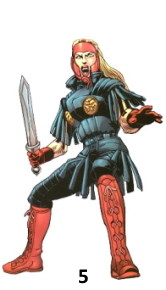 4) Among the New Hellions, Magma wore a different outfit. As she was never seen powered down at the time, the exact design of the costume is unknown. However, it included jewelry – bracelets and a huge, Egyptian styled necklace. [X-Force (1st series) #87]

5) As if trying to emphasize her heritage, Magma wore her distinctively own version of the black leather outfits the members of the X-Men and X-Corporation were wearing at the time. The costume was approximating the look of a Roman soldier knee-long leatherpants and calf-high, red string-up boots. Above that, Amara wore a short-sleeved black leather jacket, reminiscent of Roman armor in its cut, with leather strips falling to her hips and arms. Distinctive were the golden lion symbols in circles on each side of her chest. The outfit was completed by a helmet like red head-piece that kept her hair out of her face. [X-Treme X-Men (1st series) #42]

6) When the New Mutants reformed, Magma wore a uniform that mirrored the rest of the team. Comprising of a black bodysuit with a large, yellow X down the body, Magma’s version didn’t have any sleeves at first, unlike the rest, but she soon added them back on. There was a large black X on her chest, and she finished off the look with tallow boots and gloves. [New Mutants (3rd series) #1]

7) Upon joining the X-Men after being brainwashed by Mesmero, Amara adopted the team’s dark blue and gold bodysuit. The arms and legs were gold, with a large gold panel down the center of the torso that contained a large red and black X on the waist. [X-Men: Gold #23]

8) On Krakoa, Amara’s uniform was very similar to her previous look, except the gold sections were much smaller, only being contained on her boots, gloves and upper torso. [X-Men (5th series) #8]