The story of Magma starts in Nova Roma, an offshoot of ancient Rome, located in the rainforest of Brazil. When some Romans (rightfully) assumed that the Republic was doomed with the death of Caesar, they fled and established Nova Roma. The city remained undetected over the nearly 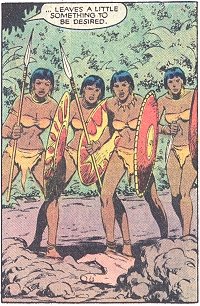 twenty centuries, and although the  Nova Romans interacted with some local Inca tribes native to the Amazon, they remained true to the traditions of ancient Rome. Naturally, Amara Juliana Olivians Aquilla, daughter of Lucius Antonius Aquilla, the first senator of Nova Roma, was raised in these traditions too.

Having lost her mother at a young age - she was murdered by the mysterious Black Priestess - Amara had a rather close bond to her father and obeyed his every wish. With a faction of the city’s Inca population attempting to transform the republic into an imperial state and some dark cult following the Black Priestess regularly sacrificing young girls in a pit of fire in some caves beneath the Nova Roma, the senator feared for his daughter’s safety and ordered her to hide among a friendly Indian tribe, disguising her features with a wig and body paint.

That is how Amara came to meet the New Mutants, who accompanied Sunspot’s mother on an archeological trip in the region. After a brief battle, Amara was captured by the Mutants,  who took her aboard their ship, only to later crash down a waterfall. The river washed away the girl’s 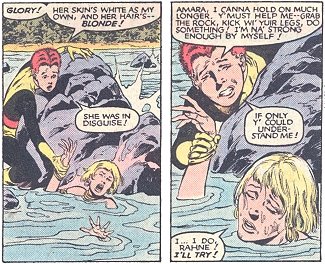 disguise, though. Before Amara could answer any questions, the entire group was arrested by a legion of Roman soldiers. They were all thrown into a dungeon and later prepared for performance in the arena. Despite Amara’s warning, the Mutants ate some of the drugged food offered to them, so she decided to escape on her own. However, she did not get very far and was captured by Selene, herself part of her artificial world as the wife of Roman Lord Gallio (Aquilla’s rival for power) and the black priestess in one person. [New Mutants (1st series) #8-9] 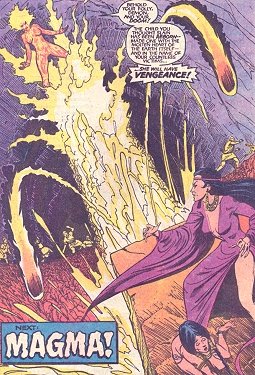 Selene to absorb her lifeforce. However, instead, the incident triggered the girl’s own mutant powers, her ability to call up and control fire, magma and earthquakes. She rose from the pit that was meant to be her grave and began battling Selene. Aided by the New Mutants, she managed to apparently kill the sorceress and also to stop the schemes of Lord Gallio, who had intended to inspire a rebellion and claim Senator Aquilla’s position. [New Mutants (1st series) #10-11]

As her power was connected to her temper, Amara’s father thought it best for her to accompany the New Mutants and receive proper training. Reluctantly, Amara agreed but when they arrived in Rio, she soon had troubles adjusting to civilization. Confused by the many new impressions, she ran away and, wandering around the city, she had a sunstroke. Hallucinating, she endangered the entire city, causing tremors and creating minor volcanoes. After she had received proper treatment, Amara finally understood the need to get her powers under control. [New Mutants (1st series) #12]

When Amara first got to meet Xavier, she, too, like many students before her, was not comfortable with the professor being able to read her mind, even though he reassured her he would only do

so to monitor her in training sessions. Magma was about to leave the school and return to Nova Roma when she overheard a long distance conversation between Xavier and Lilandra, who was busy trying to reclaim her empire. She realized that sometimes duty requires making personal sacrifices and stayed with the New Mutants. After the first culture shock, Amara soon got a handle of modern civilization, including such things as computers and electricity. She also made quick progress in the use of her powers, soon being able to melt tunnels into the ground with the walls cooling down in mere seconds. [New Mutants (1st series) #13, 16]

Also, she quickly became a love interest for Cannonball. However, Magma did not respond to his attentions, being rather embarrassed by them. The matter soon resolved with Sam meeting and starting to date rock star Lila Cheney. That way, Amara and Sam grew and remained just good friends.

Amara had a lot in common with Rachel Summers, the latest addition to the X-Men; as both were time-displaced outsiders.  One day, they went to New York for shopping and sightseeing, where 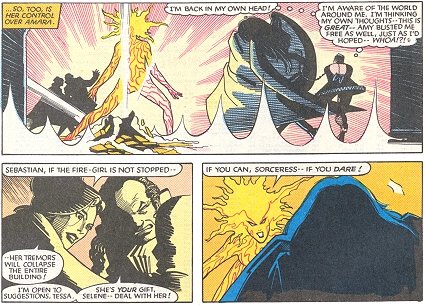 they became aware of Selene. Both sharing a hatred for her, the sorceress having killed Amara’s mother and a close friend of Rachel, they decided to rescue future victims of the energy vampire by killing her and infiltrated the Hellfire Club, disguised as servants. At first, Selene managed to hypnotize the two girls, but Rachel’s telepathy snapped them out of it. During the following battle, the X-Men interfered and Xavier reminded Amara that his students do not kill and told her if she could not accept that she would have to leave. [Uncanny X-Men (1st series) #189] 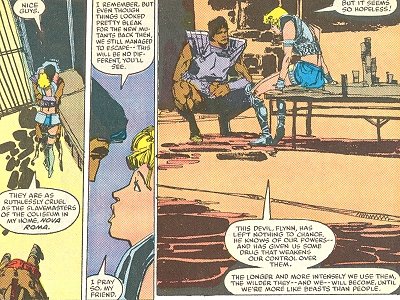 Some time after, some operatives of a mutant circus in Los Angeles kidnapped Sunspot and Magma. They were blackmailed into performing in a gladiator arena with the lives of some runaway children who would have been killed if they did not act to their captors’ wishes. Also, the two were drugged to weaken their resistance and to make them let lose with their powers. Some of her teammates, along with the aid of Kitty Pryde and Dazzler, who previously had encountered the circus, freed Roberto and Amara. [New Mutants (1st series) #29-31] 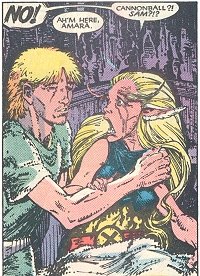 When the Enchantress, acting on Loki’s command, whisked the team away to Asgard, they were ultimately separated in both space and time, as Magik’s teleportation power had gone haywire. Magma ended up with the fairy-folk, who gave her some poisoned food. She was magically transformed into a fairy herself and, still possessing her mutant power as well, attacked the neighboring area inhabited by the dwarves, where Cannonball was staying. Sam managed to snap his friend out of her trance, though the changes to her body seemed permanent. She was now half her original size, had huge pointed ears and eyebrows and her hair reached down to the ground. Loki’s plans were thwarted by the X-Men and the New Mutants working together and he was forced to send the mutants back home and undo all the changes that had befallen them during their time in Asgard. [New Mutants Special #1, Uncanny X-Men Annual #9]