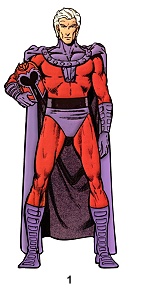 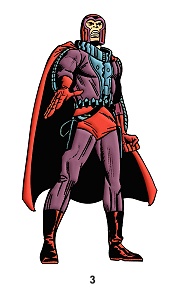 1) When Magneto made his public debut, he was already wearing his now-classic armored costume. Like most of the clothes worn by Magnus, this entire ensemble is constructed of metallic fibers, allowing Magneto to manipulate its form. This costume consists of a form-fitting bodysuit in red with a metallic purple belt, briefs, gloves and boots. The gloves and boots are sometimes depicted with red accent bands. Around his neck and shoulders is a thick metal ring adorned with large metal rivets. Magneto’s helmet is similar to those worn by ancient gladiators with an opening in the front that exposes his face. Around the opening is an ornate purple accent. Centered above the facial opening is an ornate, horn-like ornamentation. Some versions of Magneto’s helmet are equipped with psionic bafflers. A purple cape completes this classic outfit. [X-Men (1st series) #1]

2) While operating out of the Savage Land under the alias of the Creator, Magnus wore a loose-fitting, light orange body suit with navy blue boots and a belt with gun holsters. Over this, he wore a high-tech silver power-dampening harness with cables that ran from his shoulders to conduit gauntlets that adorned his wrists. These gauntlets had extensions that ran down the length of his fingers. This apparatus served to dampen his magnetic powers to allow him to operate the delicate equipment he used to create the Savage Land Mutates. He also used a flight pack and energy guns with this outfit. [X-Men (1st series) #62] Once he exposed his true identity, he added his classic helmet and purple cape, which resulted in an unsavory color combination of orange, blue, red and purple.

3) Shortly after this, Magneto returned wearing a similar outfit to the one he wore as the Creator, except with a more pleasing color scheme. His bodysuit was now purple with red gloves, boots and briefs. His power cable and chest apparatus were now a darker metallic blue. His helmet and a red cape completed the outfit. [Fantastic Four (1st series) #102]

-) In his subsequent appearances, Magneto returned to his classic costume. [Avengers (1st series) #110]

4) When Magneto attempted to reform and joined the X-Men, he began wearing this dramatically different costume. This simple uniform included a form-fitting, sleeveless bodysuit in either purple or magenta with a large white or lavender M running the length of the torso. Matching opera-length gloves covered his arms. A flowing cape in a complimentary shade of purple, sometimes featuring an M on the back completed this short-lived outfit. [New Mutants (1st series) #29] 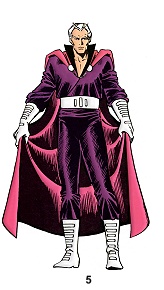 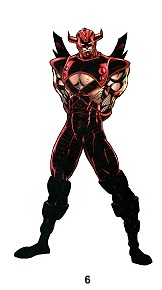 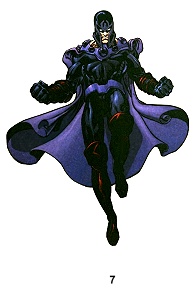 5) As headmaster of Xavier’s School for Gifted Youngster and a member of the X-Men, Magneto adopted a more mature but regal look. This included a loose-fitting, v-neck jumpsuit in magenta, white gloves and boots with a matching belt. A cape in some shade of pink, red or purple was affixed to his chest by a pair of white disks connected by a chain. [Uncanny X-Men #202]

-) Magneto’s affiliation with the Hellfire Club marked a return to his more devious methodologies and a slight variation in his classic “villain” costume. This version featured a paler purple throughout and a larger, more pronounced chest plate that featured a stylized M and covered most of his upper torso. This costume subtly changed in subsequent appearances until he was back to wearing his classic costume and helmet. [New Mutants (1st series) #66]

6) After returning from another seeming death, Magneto assumed the identity of Erik the Red and captured the X-Men. He then placed Gambit on trial for his role in the Mutant Massacre. The Erik the Red armor consisted of banded metallic red leg armor, heavy gauntlets and knee-high armored boots. The chest armor included jagged extensions on the back. Red metallic bands encircle the biceps. A stylized helmet that covered most of the face and was adorned with horns completed the outfit. [Uncanny X-Men #350]

-) Once the need for a disguise had passed, Magneto showed his true colors (red and purple) once more by going back to his original costume.

7) During the end of his days as ruler of Genosha, Magneto began wearing a slightly modified version of his classic costume. This version featured a black bodysuit and helmet instead of red. His helmet trim, belt, chest armor and cape were all purple. His gauntlets were trimmed in deep red and his knee-high boots were in a matching color. [X-Men (2nd series) #111] 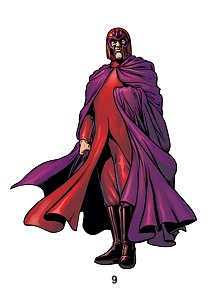 8) While rebuilding Genosha alongside Charles Xavier, Magnus started wearing a simpler version of his previous costume. This outfit consisted of a simple black bodysuit, a gray utility belt, deep red gloves and boots with a matching cloak held in place by a small, riveted black “collar” reminiscent of his earlier chest pieces. Magneto did not wear his helmet during this time. [Excalibur (3rd series) #4]

9) When Magnus flew to the aid of his deranged daughter, the Scarlet Witch, her reality-warping powers changed his costume. When he “rescued” her from her teammates in the Avengers, she transformed his costume into that recently worn by Xorn when he masqueraded as the Master of Magnetism. This consisted of a long, red, robe-like garment reminiscent of a priest’s garb that was split open from the waist down. Under this, he wore red pants and purple boots, as well as a purple cloak and his classic helmet. [Avengers (1st series) #503]

10) During the House of M reality warp, Magneto’s dream of a mutant-ruled Earth came to pass with him in the role of world monarch. As such, he was clad in a variety of outfits befitting a king. This included ornate royal robes, military style uniforms decorated with medals and a sash, tailored suits and a more casual outfit consisting of a purple suit with an Asian influenced jacket. He also appeared in his classic “villain” costume during this story arc. [House of M #2-7]