Marrina returned to her lover in Atlantis and things remained calm for the next weeks. Eventually, Namor proposed to her, asking her to rule his undersea kingdom alongside him. Before she could answer, Marrina’s amulet picked up a call from Puck, who was investigating a series of murders on Toronto‘s waterfront. 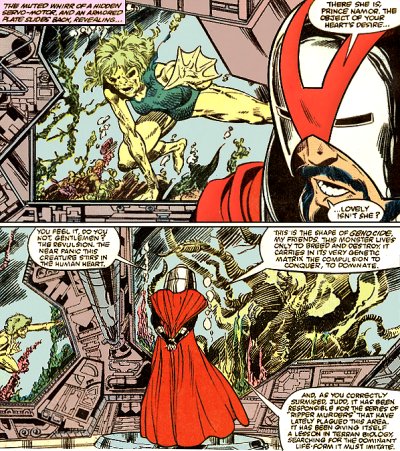 Searching the bottom of Lake Ontario for clues, Marrina sensed a strange, compelling scent that lured her into a cave. It turned out that the murders were being committed by another Plodex, who "hatched" without being imprinted and was "sampling" every genetic structure it could find. Even worse, this Plodex was Marrina‘s genetically-designated broodmate and her close proximity to it unleashed an uncontrollable animalistic rage in her. In this state, Marrina again attacked Puck before taking on her beloved, Namor. The three fought until they were all subdued by the Master. Using the alien technology he had acquired, the Master was able to control the Plodex creature. Eventually, Puck and Namor managed to damage the Master’s submarine where they were being held. The ship exploded and the Plodex creature was seemingly destroyed in the blast. However, there was also no trace of Marrina. She did not reveal herself to Puck until after Namor had left. Full of shame over her inbred reactions, Marrina was now convinced that she was more monster than human. She quit Alpha Flight and also avoided Namor, preferring to isolate herself and wander the oceans alone. [Alpha Flight (1st series) #14-16]

Marrina soon met the young superheroes called Power Pack who were fighting Snake-Eyes, the Collector’s pet. She couldn’t help but feel responsible and aided the super-powered children. Together they lured the reptile into a sunken freighter to keep it contained and then transported the ship to Antarctica, where the cold environment trapped the alien in a form of cryogenic sleep. During this battle, Marrina seemed to have a death-wish and, despite the youngsters reminding her that actions tell more about one’s characters and count more than heritage and appearance, she returned to her self-imposed exile. [Power Pack (1st series) #9-10]

Perhaps Marrina was right in doing so, for her body soon underwent strange transformations once again. She reverted to the appearance she had while near her genetic mate and was plagued by a series of abdominal pains. While in this weakened state, she was hunted and eventually captured by the warlord Attuma. Attuma had recently usurped the Atlantean throne and he needed Marrina to strengthen his position.

First, he turned public opinion against Namor by placing Namor’s bride or “queen creature, the first”, as Attuma called her, in a transparent prison for everyone to see. Attuma hoped that the hot-headed Namor would try to rescue his beloved and could be killed once and for all by the overwhelming Atlantean militia.

After losing his throne to Attuma, Namor joined the mighty Avengers. When Namor attacked Atlantis without a plan, he learned of Marrina’s fate. He immediately saw his error and retreated to ask his teammates for help. He also informed Alpha Flight and the two superhero groups invaded Atlantis together. To avoid this crisis turning into an international incident, the heroes agreed to enter Atlantis, free Marrina and leave as fast as possible. However, once freed Marrina didn’t return to the surface with them. Seeking revenge, she tried to attack Attuma but was shot by an Atlantean soldier. Marrina was not seriously injured but she fled once again when she saw Namor approaching. She didn’t want him to see the monster she had become and in her shame, she even rejected Captain Marvel’s offer to have the Avengers’ scientific experts examine her alien biology and come up with counter-measures. [Alpha Flight (1st series) #33-39, Avengers (1st series) #272] 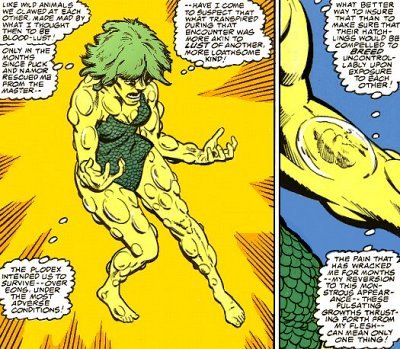 Namor wouldn’t take “No” for an answer and took a leave of absence from the Avengers to pursue Marrina alongside Alpha Flight. By the time they caught up with her, strange nodules resembling Plodex eggs had formed all over her body. It was assumed that Marrina had somehow been impregnated by her genetic mate and was about to give birth to dozens of Plodex creatures. Alpha Flight contemplated the situation and even Marrina herself suggested they kill her, as it was too dangerous to let the Plodex live. Despite this, Namor still wanted to marry her and help her to raise the hatchlings. Before a decision was reached, they were interrupted by the arrival of Marrina’s genetic mate who instinctively came to protect Marrina from the heroes. Once more both Marrina and her Plodex mate responded to their body chemistries. Marrina was immediately drawn to her mate, while Alpha Flight fought the creature for her sake. 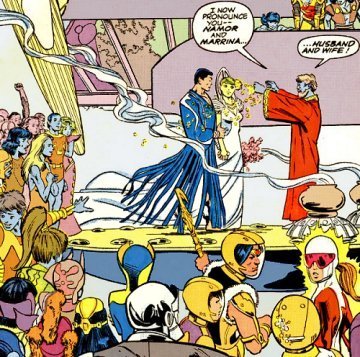 Witnessing the battle reminded Marrina that she had been accepted and even loved by the Smallwoods, Alpha Flight and Namor. She finally gathered enough strength to resist her genetic programming. The moment she did, the nodules on her body disappeared and she returned to her regular appearance. Evidently, these changes had only been a sign of her “breeder receptivity” and not actual pregnancy. Once the heroes had destroyed the horrific Plodex creature, Marrina and the Sub-Mariner were married in his new kingdom, Deluvia – an undersea colony inhabited by those Atlanteans that were loyal to Namor. [Alpha Flight (1st series) #40]

The royal couple’s happiness was not to last, however. A couple of weeks later, Deluvia was shaken by a seaquake. Neptune, the Greek god of the seven seas, arose from the resulting rift and grabbed Namor. The rift then sealed shut. The Greek gods blamed the Avengers for injuries that Hercules had received during an earlier battle and wanted to punish them for it. Marrina feared for her husband’s fate. The Atlanteans perceived the wrath of the god they had been worshipping for generations as a bad omen and fled from their newly built kingdom. By the time the Avengers were cleared of the gods’ charges and returned home, Namor and Marrina no longer had a kingdom to rule. The newlyweds decided to move in with the Avengers. [Avengers (1st series) #282, 285]

Although not an official member of the team, Marrina aided the Avengers with a few missions, eager to prove to her husband that she was capable of protecting herself. When the Avengers attended a party hosted by New York City’s mayor, Marrina began acting strangely. Feeling hungry, she grabbed living fish from an aquarium and ate them. When Namor tried to intervene, 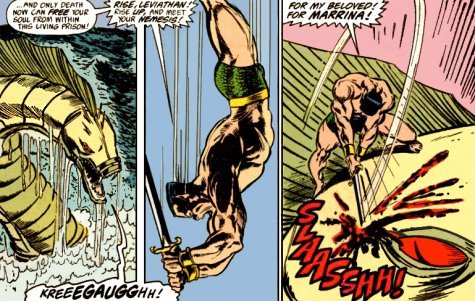 she responded violently and ran away to the nearby riverside. As she escaped into the ocean, Marrina’s features began to change once more before her husband’s eyes. This time, she transformed into a monstrous Leviathan and attacked and sank several freighters all over the Atlantic Ocean. At first, Namor stood by her side and kept the Avengers from harming her. But eventually, he had to accept that Marrina had to be stopped. The Avengers tried using a DNA repressor serum derived by Henry Pym to reverse Marrina’s transformation but the results were only temporary. Marrina was herself for a few seconds before once more becoming the Leviathan. The Avengers had no other choice but to kill her. Namor himself slew her, ramming the Black Knight’s Ebony Sword into the Leviathan’s forehead.

After Marrina’s death, the Avengers learned the reason for her behavior – on the bottom of the sea, the

Leviathan had built a nest using the ships she had attacked. The nest contained three eggs. Marrina’s physiology proved to be human enough to be impregnated by Namor. Her pregnancy and childbirth caused her Plodex heritage to reassert itself. Before the Avengers could react, the three eggs hatched and the dark-skinned hybrids that emerged vanished into the depths of the ocean. The Leviathan’s body reverted back to Marrina’s frail form and Namor left to give her a decent burial. [Avengers (1st series) #291-293]