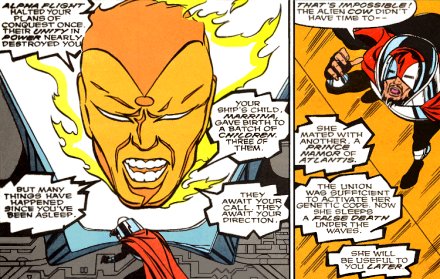 Later events suggest that the heroes again underestimated Marrina’s alien physiology, as she was not fully dead. Several months later, the being known as Llan the Sorcerer informed the Master that Marrina was merely “sleeping a false death” beneath the waves and that she would be useful to him later. [Alpha Flight (1st series) #78]

The Master proceeded to violate Marrina’s grave and retrieved her body to use in his own Plodex breeding experiments. Unaware of this, Namor was more concerned with the aftereffects of his wife’s passing. During an encounter with the Bloodwraith, the current wielder of the Black Knight’s ebony blade, he made sure that his wife’s soul was freed from the ethereal realm that the blade’s victims were trapped in. [Namor #61] 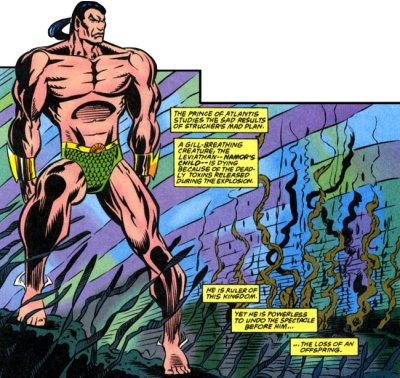 He also investigated the fate of his and Marrina’s offspring, when he discovered Hydra trying to retrieve their supply of a new, deadly toxin that had been developed in an undersea facility. The facility had been destroyed and while searching the scene, Namor found a bizarre life-form and vegetation originating from a nearby chasm. Namor immediately recognized them to be products of his and Marrina’s offspring. Before he could determine how to handle them, he had to fight Hydra’s leader, Baron Strucker. When Strucker’s submarine exploded, the deadly toxin was released into the waters and killed Namor’s Plodex offspring. [Namor Annual #4] 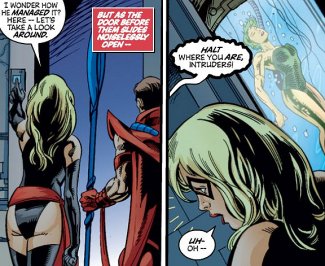 Years later, the Master resurfaced after he had successfully created a pack of Plodex warriors loyal only to him. The moment that he chose for his dramatic re-appearance couldn’t have come at a worse time. All of Earth was in the middle of a war with the Avengers’ perennial foe, Kang the Conqueror. Amidst the conflict, Warbird of the Avengers broke into the Master’s Arctic base and found the chamber where he had apparently created his Plodex slaves. She wondered where he could have gotten the genetic material to work from, and almost discovered the unconscious Marrina in one of the lab’s holding tanks. Distracted by the raging battle, Warbird didn’t have the time to notice. [Avengers (3rd series) #47]

Once both Kang and the Master were defeated, his lairs all around the world dissolved into their components just like the original Plodex ship. By all rights, Marrina’s unconscious form should have been lost somewhere in the Arctic ice or left drifting in the ocean. 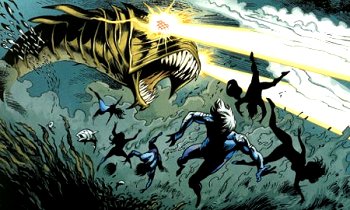 Through unrevealed circumstances, Marrina’s body was eventually recovered and ended up in the possession of Norman Osborn, who was serving as head of security for the United States. Osborn saw Marrina as the perfect weapon to get back at Namor who had betrayed Osborn and sided with the X-Men. Osborn ordered his team of scientists to revive Marrina and transform her back into the Leviathan. They also made certain genetic modifications including splicing shark DNA into her genetic make-up. The result was an even deadlier Leviathan which was programmed to only be able to digest Atlantean blood. Once she was let loose, Marrina began to hunt and slaughter Namor’s scattered people. When he learned of this, Namor wanted to solve this crisis himself. But he was convinced to allow his new allies, the X-Men, to aid him. Working together, the mutants evacuated thousands of Atlanteans from harm’s way and helped weaken the Leviathan enough for Namor to deliver the killing blow. He then decapitated the beast his wife had become and hurled the monstrous head into Osborn’s office. The enraged Namor made it absolutely clear that not only had Osborn’s plan failed but that matters between them were far from resolved. [Dark Reign: The List - X-Men]

The afterlife would not hold Marrina for long. When the Chaos King instigated his Chaos War, destroying the Under World in the process, Sasquatch made a pact with the Great Beasts. In exchange for helping them to escape the Chaos King's wrath by enabling them to breach the borders and come to Earth, the Great Beasts would resurrect several of his deceased teammates, including Marrina and several other recently killed Alphans. The Great Beasts agreed and Marrina, Guardian, Vindicator and Shaman were reunited with Snowbird, Sasquatch, Northstar and Aurora. Together, reformed Alpha Flight battled the hordes of the Chaos King alongside the Great Beasts. However, when several members of Alpha Flight realized they were being used as pawns by the Great Beasts, they tried to convince the others to halt their battle. Having reverted to a more savage state since her resurrection, Marrina was stopped by Vindicator, who sided with the anti-Great Beast contingent.

Apparently, Marrina did not seek out her husband, Namor the Sub-Mariner, as she remained with the re-formed Alpha Flight. Even more curiously, she developed a rather harsh new attitude, suddenly proud of her alien heritage and not afraid to speak her mind, even though this new attitude did cause some concern with her teammates. 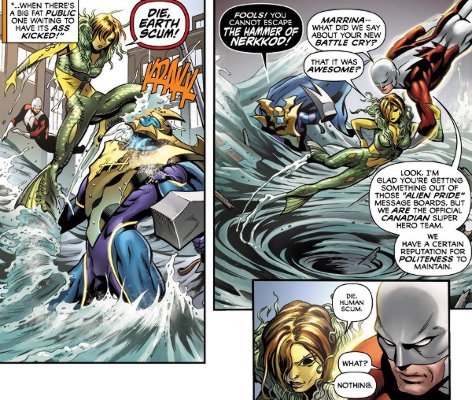 She also donned a new costume and had some streaks of pink color put through her hair. During a time when the world was plagued by fear by the rise of the Serpent God, Attuma, whose power had been increased by the malevolent deity, launched an attack on the Pacific coast of British Columbia. Marrina's abilities made her well-suited for the battle, but even she couldn't break through Attuma's whirlpool and the battle ended when Guardian transported himself and Attuma away. The trouble wasn't over, though, for Marrina and her teammates were captured by Department H, the very organization that was supposed to support them. Gary Cody, their former liaison, had been elected prime minister and enacted the Emergencies Act, suspending Canada's Charter of Freedom. He believed that only “unity” could save Canada from the fear plaguing the world, and began the mind-controlling Unity process on Alpha Flight. During this process, Marrina was shown that, even as an alien, she could be beloved. [Alpha Flight (4th series) #1-2]

Alpha Flight were rescued by Northstar and Puck, the latter of whom had also recently returned to the living, having escaped Hell in the process. Marrina was very happy to be reunited with Puck and eager to fight against the oppressive humans that were tasked with keeping Alpha Flight prisoner. When Alpha Flight were soon branded as terrorists and betrayed by Vindicator, the team became tense and personalities clashed. Throughout this, Marrina maintained her new attitude and showed off her new sense of humor, though she also showed off her sensitive side. When Guardian, betrayed by his wife and country, threw the Canadian flag costume that covered his exo-skeleton over Niagara Falls, Marrina dived into the water unseen to retrieve it and returned it to him when he was giving their new allies, regular Canadians who had been outlawed by the Canadian government, a rallying speech. [Alpha Flight (4th series) #3-4] 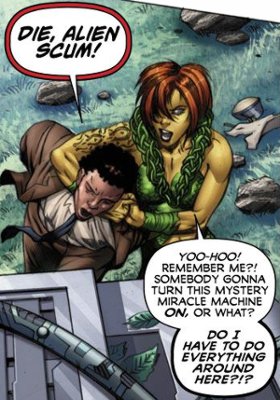 It was soon revealed that Alpha Flight – and Marrina's – longtime foe, the Master of the World, was behind their current troubles. However this time the Master had no interest in Marrina, for he was using Vindicator to get to her daughter, Claire, planning to make the child his heir – or mate. Marrina didn't get to battle the Master, as this was left to Vindicator and Guardian. Instead, while Alpha Flight fought their new enemies, Alpha Strike, Marrina kept watch over Northstar's boyfriend, Kyle, who had also been captured by Unity and undergone the brainwashing process. In the aftermath, the Master was defeated and Alpha Flight began assisting with the clean-up process, once again as Canada's premiere super heroes. [Alpha Flight (4th series) #5-8]

Marrina continues to serve as a member of Alpha Flight. Perhaps her time with the team will not end as suddenly as her did original tenure.