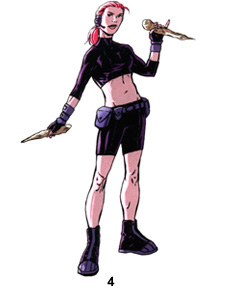 1) Marrow’s first costume was basically a blue bathing suit with an asymmetrical piece of golden armor on top of it, covering her right shoulder and the left side of her chest. Additionally she wore short, blue gloves and boots with tassels. Mostly the costume included yellow pants, though sometimes Marrow’s legs were left bare. [X-Men Prime]

2) After her control over her bone growth had somewhat improved, Marrow started wearing this two-parter, leaving her midriff exposed. The sleeveless top and pants were both of green and blue color, with the same short gloves from before completing the look. Several bone plates protected her kneecaps and her rib cage. [Uncanny X-Men (1st series) #346]

3) When Marrow emerged from the Skrull healing device, her uniform was also different. In fact, it was just a sleeveless bodysuit, covering her from chest to toes. It only looked unique because of Marrow’s bone structures on top of it, including the long boots, and a bone “bikini” and the horns that grew out of her forehead. While at first the basic suit was colored blue, she Sarah was also seen wearing a pink version of it. [X-Men (2nd series) #90]

-) While brainwashed into SHIELD service, Marrow wore something that resembled her original Gene Nation look very much. [Spider-Man / Marrow One-Shot]

4) As an agent of the Weapon X program, Marrow wore a black leather top with half-long sleeves and biking pants of the same material. Her gloves and boots ended in metallic wristbands, and the belt contained several pockets filled with gadgets and weapons. [Weapon X - The Draft: Marrow] 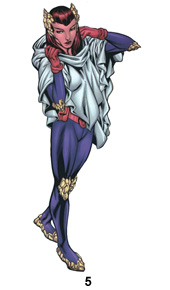 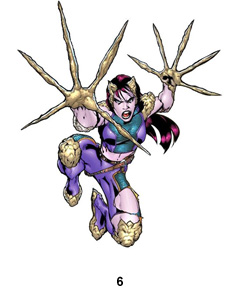 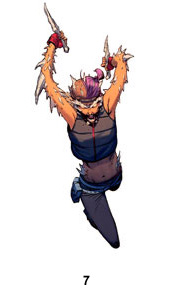 5) Having reorganized Gene Nation, Marrow adopted a more formal outfit she wore addressing her followers. Basically, it was purple bodysuit with red accessories and a short white robe on top of it. By this time, Marrow’s bone growth was already spinning out of control again, resulting in two horns on the sides of her head, and more bone structures manifesting on her shoulders, elbows, knees and feet. [Weapon X (2nd series) #19-20]

6) Marrow's other Gene Nation-revival costume was a gray/silver version of her Weapon X look. This outfit, she wore when training and fighting. [Weapon X (2nd series) #19-20]

- Marrow returned to her second costume when she rejoined the Morlocks.

7) When Marrow joined X-force, she abandoned her colorful costumes and adopted the team’s stealthy look. She wore a black tank-top with red trimming that showed her mid-riff and black combat trousers. She also wore boots with red laces and red fingerless gloves. She occasionally wore a dark jacket too. [X-Force (4th series) #1]