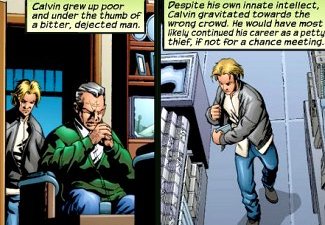 Calvin Rankin of Earth 12 was raised by his father, a failed scientist who had grown bitter over the years. Though he was a brilliant scientist, Ronald Rankin was a terrible businessman and all of his inventions were stolen from him. Calvin grew up poor and though he was quite smart himself, he was an angry young man who gravitated toward the wrong crowd. As a teenager, he began stealing and it is likely that his career as a petty thief would have progressed into a life of crime were it not for the emergence of his mutant powers in his late teens.

While the abilities of most mutants manifest in a rather obvious way, Calvin’s powers of mimicry only came into play the first time he was in close proximity to other mutants. One day, he ran into the original X-Men in their

civilian guises and instantly copied their individual mutant abilities. Calvin did not wish to lose these intoxicating powers he had mimicked, so he followed the five teenagers around for hours. When he eventually lost them, he found that his power had permanently stored their genetic imprints. Calvin sought out the Brotherhood of Evil Mutants and asked to join them as the Mimic. [Exiles (1st series) #14]

Calvin’s first mission with the Brotherhood was an attempt at kidnapping a wealthy anti-mutant senator. The team was confronted by the X-Men 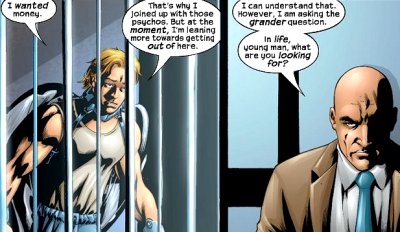 who were startled to see that one of their adversaries wielded all of their powers combined. However, they proved to be more skilled in the use of these powers than the Mimic and combined with their superior teamwork, they managed to defeat him. His allies from the Brotherhood of Evil Mutants abandoned Calvin as soon as they realized he was losing the battle. He soon found himself locked away in a maximum security facility. It was there that Calvin met Professor Charles Xavier, who visited the prison and reached out to the troubled teenager. Though he was still angry, the Mimic had no desire to remain incarcerated, so he accepted Xavier’s offer. Charles arranged for Calvin to be released into his care.

Calvin had always been a loner and it took him quite a while to adjust to life at Xavier’s school and to open up to his fellow students. Eventually, he was accepted into their midst and they became his friends. Thanks to the training he received from Professor X, Calvin soon gained full control over his abilities. He knew his teammates’ powers as well as he did his own and eventually became the X-Men’s leader. As more mutants joined the team, Calvin led the X-Men to greatness, emerging as one of the planet’s most popular heroes.

Due in part to his popularity with the public, anti-mutant hysteria was soon at an all-time low.

The Mimic also had full control of his mutant abilities. He was able to copy the powers of five different mutants at a time, gaining half the power level of the original owner. He could consciously choose which copied power to discard when he wished to mimic a new power set. Over the years, Calvin found a favorite combination of powers - Cyclops’ optic blasts, Colossus’ strength and steel skin, Beast’s agility, Wolverine’s claws and healing factor and Angel’s wings. [Exiles (1st series) #1, 14]

At the prime of his career, the Mimic was suddenly transported to a strange, desert-like place outside of regular space-time. Calvin was not alone and soon met five other people – all complete strangers - who shared his fate. An entity calling himself the Timebroker addressed the six time-lost mutants, claiming to be derived from their collective subconscious. The Timebroker explained to them that they had become “unhinged from time” due to cascading ripples through time that had altered their native timelines. The team was assembled to “fix realities” and would eventually be rewarded for their efforts by being sent home once their original timeline was restored. This was already hard to swallow for the six strangers and it only got worse when the Timebroker explained in detail how each of their native realities had been changed. In the Mimic’s case, the attempted kidnapping by the Brotherhood of Evil Mutants had resulted in the senator’s death and if he returned to his native reality, he would find himself in prison awaiting the death penalty.

His new teammate Blink was provided with a guiding instrument known as the Tallus and Mimic and the other reluctant mutant recruits set off on their quest to repair the timestream. They began calling themselves “The Exiles.” Their first mission proved to be a difficult tutorial in the concept of alternate realities. Arriving in this new reality, they cluelessly unleashed that world’s version of Charles Xavier, a mass-murderer and the planet’s most dangerous menace. They had all expected the man to resemble their memories of him and could not fathom how their beloved mentor could ever become such a villain. Their error in judgment cost them one of their teammates and left 250,000 people brain dead due to Xavier's actions. In the end, Mimic used Wolverine’s claws to kill the twisted, evil version of his mentor. [Exiles (1st series) #1-2] 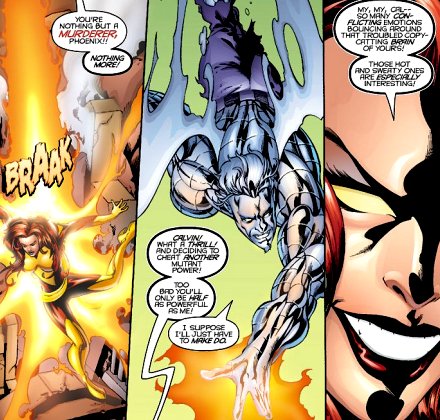 The team’s second mission was equally troubling, as the Exiles were tasked with ensuring that Jean Grey died in an alternate reality version of the Trial of the Phoenix. Mimic hated having up to battle another reality’s version of the X-Men, especially Jean Grey whom he once had had a romantic interest in. Once the redheaded X-Man transformed into Dark Phoenix, she easily overcame every attacker. Calvin willingly gave up Angel’s wings in order to mimic Phoenix’s raw power, buying his teammates enough time to defeat her. [Exiles (1st series) #3-4] In order to regain the ability to fly, Mimic spent time with Northstar in the next reality the team visited in order to copy his abilities. [Exiles (1st series) #6]

Over the course of the team’s early missions, Blink and Mimic grew close to each other. Calvin’s physical attraction to Blink became rather obvious when she caught him staring at her butt while they were strategizing for 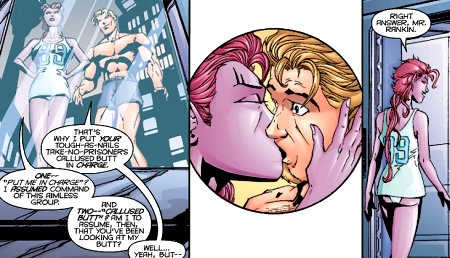 a mission. Blink took advantage of the situation and kissed him, clearly demonstrating that the interest was mutual. The next time the Exiles were granted some downtime, they all checked into a hotel. That night, Mimic dreamed of them as a married couple living happily ever after. Meanwhile, Blink had a nightmare. When she woke, she teleported to Mimic’s room seeking comfort. The pair spent the night together. [Exiles (1st series) #5, 7]

After months of completing mission after mission, Calvin grew frustrated. No matter which Earth they visited, it was always a horrible place compared to the one that he originated from. Each mission 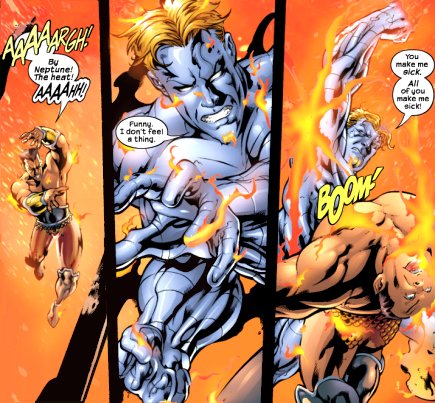 involved some catastrophic event or people he remembered as heroes, if not friends, who had turned bad. Eventually the Exiles arrived in a reality where they needed to help Dr. Doom - of all people – against Namor and his army of Atlantean warriors. The Sub-Mariner planned to use Doom’s technology to kill every human on the planet. While the other Exiles went to help Doom’s army, the Mimic ventured into Dr. Doom’s castle, which had already been conquered. Fighting against the castle’s defense mechanisms, including dozens of Doombots, Calvin completely let loose for the first time in months. When he was finished with these defenses, he had to fight Namor himself. Calvin counted his own reality’s Namor among his closest friends, so he tried to reason with the Atlantean ruler. This Namor was a fanatic monarch and refused to listen. Calvin saw no alternative but to kill him. He set the castle on fire, allowing it to go up in flames as he kept pounding on Namor. Weakened by the intense heat, Namor couldn’t fight back anymore and perished as a result of the brutal beating he received from the Mimic.

Once Mimic returned to his teammates, Blink noticed that something was wrong with her lover, but she couldn’t get him to talk about it. Cal completely withdrew into himself. In addition to his hatred for the Exiles’ ongoing mission, he also questioned the sincerity of his feelings for Blink, considering that their relationship was only on borrowed time. [Exiles (1st series) #14-15] Over the next weeks, Clarice tried to get Calvin to open up to her, but he only pushed her further away. [Exiles (1st series) #17]