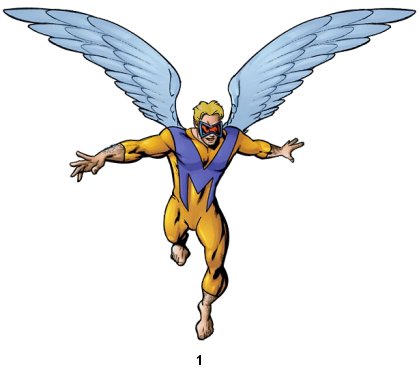 1) Mimic's original costume was primarily a yellow bodysuit with a large purple 'M' on his torso. He wore ruby quartz goggles since he possessed Cyclops's powers. To make use of Beast's agility and over-sized hands and feet, he wore no gloves or boots. [Exiles (1st series) #1]

-) Upon joining the X-Men, Calvin was given the standard yellow and blue training uniform that most X-Men wear while learning to use their powers. [Exiles (1st series) #14] 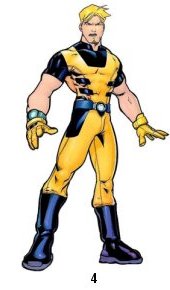 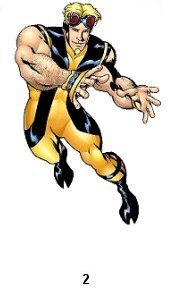 2) When he received his own, unique costume, Calvin kept the same basic color scheme. It was a sleeveless, yellow body suit with broad dark-blue stripes running from the shoulders down to his thighs. A pair of ruby quartz goggles, blue boots and gloves along with a blue headpiece that left his hair and face exposed completed this uniform. Calvin still wore it when he joined the Exiles. [Exiles (1st series) #1]

3) Mimic's next costume consisted of blue pants and a yellow shirt with broad dark-blue trim around the neck, in the center of the back and at the end of the short sleeves. Occasionally, Calvin wore a brown leather jacket on top of it. Around that time, he also stopped wearing the ruby guartz goggles, as he apparently no longer needed them to control Cyclops’ optic blast. [Exiles (1st series) #12]

4) During his time as the Exiles’ leader, Calvin wore another yellow body suit with short dark-blue sleeves. The neck area, the belt, the boots and a few details on either side of the abdomen were of the same dark blue color, while the short gloves were yellow. [Exiles (1st series) #26]

-) Mimic’s final costume was an amalgam of his other looks. It was basically the same as his previous costume, but he no longer wore gloves and the small details were replaced by dark blue stripes on either side of his body, running from the shoulders to the thighs. [Exiles (1st series) #46]