Mimic remained off the radar for quite some time. When his powers once again began to spiral out of control, the powers of the original X-Men resurfaced on a seemingly permanent basis. Cal found a sanctuary with members of Charles Xavier’s Mutant Underground at a remote station in Siberia, far from mutants whose powers her 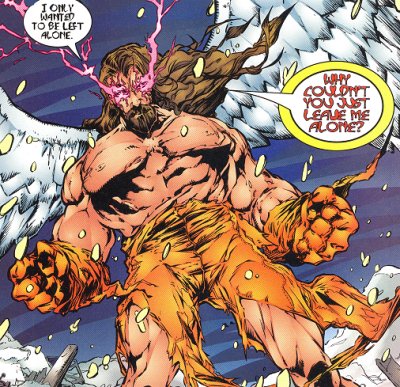 might copy. He found peace and friendship with the human scientists who were trying to help him regain mastery of his powers. This all ended when the station was destroyed by unknown forces. Cable's X-Force squad was sent to investigate when the Underground’s Siberian outpost suddenly went off-line. Arriving at the outpost, X-Force found a massive crater and the operatives at the station dead. They were intercepted by Mimic who was injured and panicking. Rankin attacked X-Force, mistakenly believing that they were responsible for the destruction of his makeshift home. The battle ended when he came into contact with Sunspot, resulting in a massive explosion when their two solar power signatures reacted to one another. The Mimic and the entire X-Force team were knocked unconscious and while they were out, Cal was kidnapped by an unknown party. [X-Force (1st series) #45-46]

As it turns out, Onslaught was the apparent agent behind the station's destruction and Calvin may have had some dealings with him during his initial plots. Mimic soon became allied with the Deviant mechanic named Sledge, who assisted Cal in gaining greater control over his powers. While working off his debt to Sledge, Mimic was teamed with the Blob, another of Sledge’s allies. The pair ran into another X-Force squad while trying to steal Nimrod technology from Camp Hayden. [X-Force (1st series) #52]

The Blob was defeated but the Mimic facilitated their escape. Shortly after this, Sledge charged them with keeping an eye on the young woman called Risque who was also working off a debt to Sledge. He had asked her to help manipulate X-Force member Warpath into doing Sledge a favor. Mimic and the Blob provided Risque with back-up, keeping her out of Onslaught and Mister Sinister's clutches when necessary. When it became apparent Risque wasn't going to fulfill her side of the deal, Sledge had Mimic and Blob pressure her to comply. Sledge finally sent them to bring Proudstar to him personally. They were soundly defeated by Warpath and Risque and were taken into custody of Operation: Zero Tolerance. [X-Force (1st series) #65]

The Mimic was transferred to a hidden Peruvian base that slipped through the cracks in SHIELD's clean-up of Zero Tolerance. Cal was beaten and tortured continuously by the Prime Sentinels during his imprisonment. 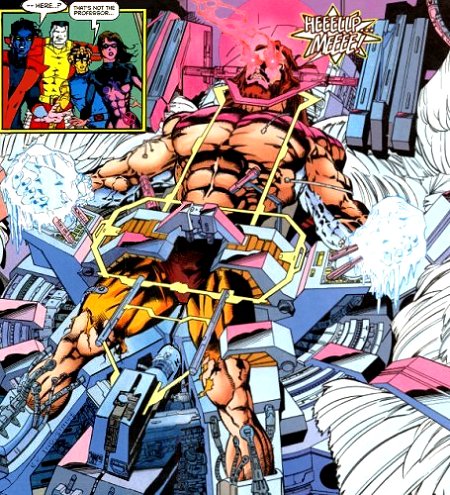 His powers eventually proved to be too much for the remaining skeleton crew of Prime Sentinels to contain. Even shackled to a table inside a reinforced cell, the delirious Mimic's telepathic and telekinetic powers ran wild, striking out at his jailers from a distance and sealing off the entire base inside a telekinetic force dome. He was eventually rescued by Excalibur, who were searching for clues to Professor Xavier's whereabouts after his disappearance during Operation: Zero Tolerance’s initial campaign months previously. They brought Mimic back to Muir Island to recuperate from his ordeal. [Excalibur (1st series) #122-123]

Calvin recovered quickly and found himself impressed by the sense of family among Excalibur’s members, something he hadn’t experienced since his time with the X-Men. He might have stayed on as a member of Excalibur had the team not disbanded only a week later following the wedding of Captain Britain and Meggan. [Excalibur (1st series) #125] 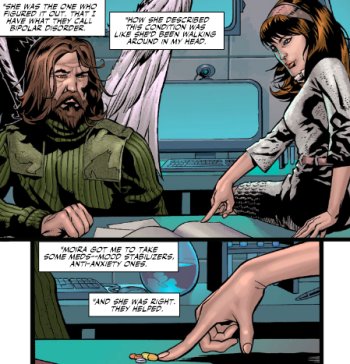 During his time on Muir, Dr. Moira MacTaggert reviewed Cal’s history and behavioral problems and diagnosed him with bipolar disorder. At her suggestion, he began taking medication to help control his anxiety and other psychological problems. Although the medication was helpful, Mimic was not conscientious about taking on the prescribed schedule and occasionally slipped into his previous behavioral patterns. [Dark X-Men: The Beginning #1]

Left to his own devices after he left Muir Island, Mimic ran into trouble when rumors began to swirl about an unstoppable mutant-hunting entity known as Cerebro. For his own protection, Mimic reunited with his one-time partner the Blob and other mutants to form a new Brotherhood. The group then proceeded to break Charles Xavier out of O:ZT custody. The news coverage of Cerebro's deadly new X-Men constructs left the Brotherhood wary of trusting Xavier's former students. They took up residence inside the abandoned Alcatraz prison and convinced Xavier to train them to fight Cerebro if it came hunting for them.

The real X-Men tracked Xavier to Alcatraz where they engaged the new Brotherhood, unaware of their true intentions and alliance with Xavier. The battle was interrupted by the arrival a remote agent of 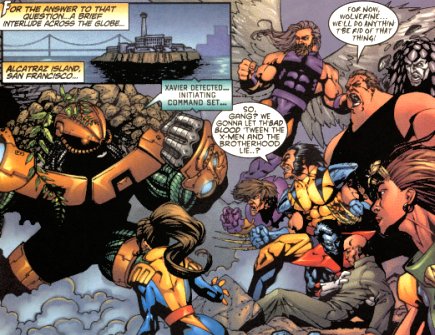 Cerebro. The two teams joined forces and fought valiantly, but vainly, against the Cerebrite until the X-Men reasoned that the best way to defeat Cerebro would be to attack it directly at its lair. Allowing themselves to be absorbed and "catalogued" by the Cerebrite, the X-Men were transported to Cerebro's home base and ultimately destroyed it, leaving Mimic and the Brotherhood behind in San Francisco. [Uncanny X-Men (1st series) #363-364, X-Men (2nd series) #83]

Mimic continued working with this incarnation of the Brotherhood, and they engaged in a few mercenary jobs including one for Mystique. The mission went south and the Mimic was captured and taken into custody by the Commission on Superhuman Activities. He was tortured once again but his release was arranged by Valerie Cooper in exchange for information. Though Cooper believed him to be “one of the good guys” who had just fallen in with the “wrong crowd,” Mimic chose to return to the Brotherhood once released. [X-51: The Machine Man #1-2, 6] He was with this team when the High Evolutionary unleashed his gene-altering wave across the Earth, rendering all mutants powerless. [Uncanny X-Men (1st series) #379]

Mimic’s activities in the period after mutantkind’s powers were restored are unclear. He ended up a captive of the Thunderbolts inside their Folding Castle, after Iron Man charged them with capturing super-villains to bolster their ranks during the Civil War. Calvin was not among those initially selected to train to become part of the team and it is unclear what became of him after Stark’s resignation and the subsequent shifts in governmental power .[Thunderbolts (1st series) #103] 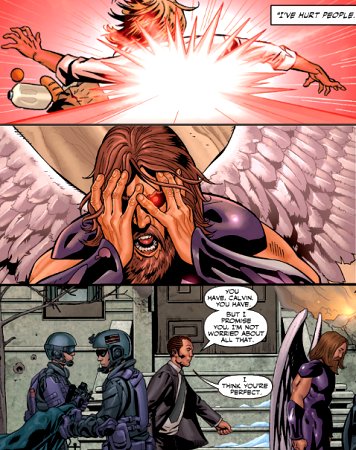 After M-Day, Mimic tried to live a normal life and control his mood swings with medication. His efforts proved in vain. Once more, Calvin lost control of his powers. This time, he unleashed his optic blasts by accident and killed a random pedestrian. Norman Osborn, who had risen to power following Tony Stark's fall from power, arranged for H.A.M.M.E.R. to deal with the situation and took Calvin under his wing. [Dark X-Men: The Beginning #1]

Thrilled at being offered a clear direction in life and the idea of being an official “good guy”, Cal joined Norman Osborn and his H.A.M.M.E.R.-sponsored X-Men. Based in San Francisco, the team was crafted to act as a public counter to Cyclops and the rest of the real X-Men. [Uncanny X-Men (1st series) #513]

Despite his positive attitude on this new team, Mimic seemed to have no reservations about fighting his former friends so long as he was on the “right” side. None at all. When Emma Frost and Namor defected back to the real X-Men with half the team, they made no attempt to convince Calvin to join them, but instead rendered him unconscious with

barely an explanation. [Dark Avengers #8] He fought alongside Norman’s Dark Avengers against the X-Men on Utopia without a word of protest, but was overwhelmed fighting the younger X-Men. Their multiple powers were too much for Mimic to handle at once. He and Osborn’s forces had to withdraw from battle, relying on Norman’s PR skills to spin victory from defeat. [Dark Avengers / Uncanny X-Men: Exodus]

Osborn’s remaining mutant recruits, including Mimic, continued to operate as his sanctioned X-Men team from a H.A.M.M.E.R. base in New York City. 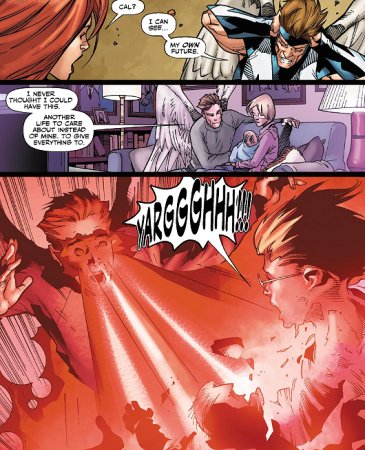 Calvin’s bipolar disorder entered a depressive period, and counseling sessions with Karla Sofen did little to improve his condition. Osborn dispatched his X-Men to California to investigate an outbreak of otherwise normal people claiming to be X-Men while in a trance-like state. While interviewing one of the people, Mimic and Weapon Omega got conflicting results with their mutant-sensitive powers. One moment the man “felt” like a regular human, the next moment he possessed mutant powers that Cal could copy. Suddenly imbued with psychic powers, Mimic experienced a precognitive flash. He saw himself reunited with Vera Cantor, happily living together with their newborn baby. The vision suddenly turned horrific as Cal saw his future self lose control of his powers and unleash an optic blast directly at Vera and the baby, apparently killing them both.

Mimic and Weapon Omega nearly overloaded on the raw mutant energy they were channeling. Luckily, the energy coalesced into a physical form, that of Nate Grey, the lost Shaman to the Mutant Tribe. Grey assaulted Osborn and his Dark Avengers at Avengers Tower as Mimic and the X-Men tried to pursue him. Cal was particularly interested in getting close enough to once more mimic Nate’s precognitive powers so that he could find a way to avoid the future he saw. Once the Dark X-Men joined the battle, Cal mimicked Nate’s power and joined the X-Man on a psychic plane. He tried to find out if the Nate’s future visions could be changed or if they were inevitable. Nate told him changing the future was a possibility but the physical battle escalated before they could discuss Cal’s vision further. 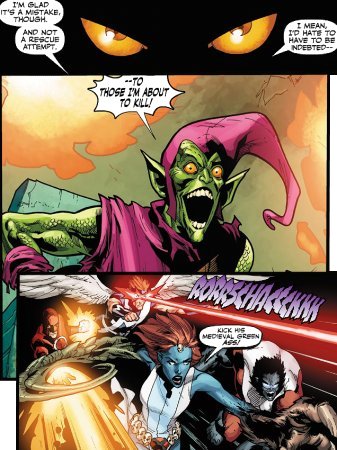 The conflict with X-Man took the Dark X-Men into the mind of Norman Osborn himself, where Nate Grey fought against both Norman and his counterpart, the Green Goblin. Mimic and the X-Men were torn on who they wanted to help. Cal’s motivation was now wrapped up in clarifying the future vision he had seen. Despite this, he still showed care for his teammates and an innate decency that not all his teammates possessed. The X-Men fought back against the Goblin but the tide turned when he manipulated Mimic into copying Weapon Omega’s mutant-absorbing powers, set them both on Nate Grey to siphon away his powers. Grey was neutralized by H.A.M.M.E.R. and subsequently tortured by Osborn. Just before he was carted away to a holding cell, Grey told Mimic he could’ve helped him put the vision in context, but now it was too late. [Dark X-Men #1-5]