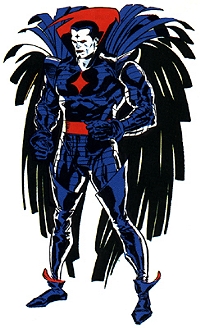 "Mr. Sinister's dealin' a game that don't allow for wild cards like the Morlocks... Or you X-Chumps either." These are the enigmatic words spoken by Sabretooth that gave the X-Men, and the reading public, their first glimpse at a master villain who would transform the X-Men's world. The setting of this revelation was in the Morlock Alley, an abandoned underground bomb shelter beneath Manhattan, where a colony of mutants, until recently, had lived. Wolverine and Sabretooth spoke among the hundreds of corpses that were the remains of the horrific Mutant Massacre. [Uncanny X-Men (1st series) #212]

While we learn from Sabretooth that this massacre was at the behest of someone named Mister Sinister and carried through by his minions, the Marauders, it would be months before we actually saw the villain and years before we would learn who he was, and even longer before we would learn why this massacre would have been ordered. Even though he came much later than the X-Men's most classic foes, Magneto, Juggernaut, the Sentinels, the Hellfire Club, Sinister quickly rose in rank to be one of their most deadly. From very early on, Mister Sinister seemed interested not in any acquisition of power or in being an adversary to the X-Men, but in the lineage of a specific family, that of the Summers line. To understand the motives of Sinister, or to fathom the interest he has over the Summers family, we must first know how such a being came to be.