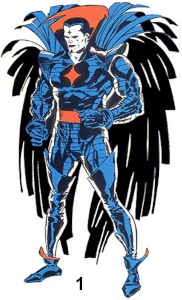 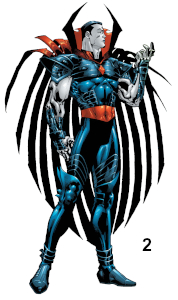 1) Mister Sinister’s original, iconic villain design was built around a suit of material resembling metallic bands. Over the years, it has been colored black, midnight-blue, or shades of purple. He also wore gloves and both thigh high boots and smaller elf-like boots over them. A red band surrounded his beltline and a red diamond on his chest matched the one on his forehead. Sinister also wore an operatic collar and cape made of shredded bands of material. [Uncanny X-Men (1st series) #221]

2) Mister Sinister occasionally wore stylized versions of his traditional costume (given that the suit was likely living biological armor expressed by his control of his cellular structure, he could look like anything). [X-Men (2nd series) #99]

3) While working as a mad doctor, Essex had a more traditional look with a civilian trenchcoat and pants over his classic chestplate design. A set of red-tinted goggles typically accompanied this look. [Weapon X (2nd series) #26]

4) After a series of evolutionary modifications to his mind and body, Sinister embraced a return to his roots and a more Victorian aesthetic. In addition to anachronistic clothing styles, he occasionally carried a cane simply because it looked sporting. [Uncanny X-Men (2nd series) #1]

-) As time passed, Mister Sinister returned to his traditional attire, although he occasionally shifted back and forth between that and the Victorian style. [Wolverines #1]