Sinister was born in the 19th century under the name of Nathaniel Essex. A brilliant scientist he became obsessed with the works of Charles Darwin and his work on natural selection. 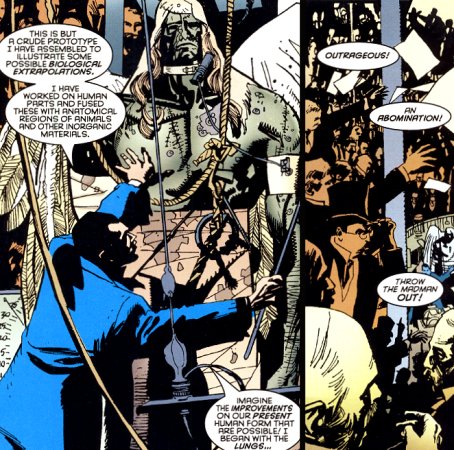 Essex came to believe that Darwin was too conservative in his theories and foresaw that mutations could occur not just over a long periods of time, but over the span of one or two generations. Essex addressed the London Royal Society with his theories, complete with examples of his theories made up of parts spliced from cadavers both human and animal.

Ousted by the Society Essex began to experiment on the homeless and indigent, all brought to him by a group of thugs in his employ, called the Marauders. The Marauders stumbled upon an ancient evil newly awakened from hibernation, En Sabah Nur, also known as Apocalypse.

Apocalypse approached Essex, pleased with his theories, which finally explained Apocalypse's own existence. Essex in turn lead Apocalypse to members of the Hellfire Club, a secret society of Britons seeking power. 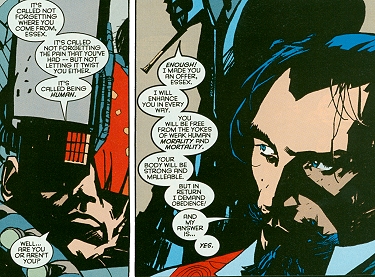 As Essex and Apocalypse planed their global upheaval a pair of mutants suddenly appeared trying to halt their plan. Both Essex and Sinister were unable to know that these two mutants were from the future, sent back to prevent the ascendancy of Apocalypse. One of these mutants, Cyclops, plead with Essex not to accept the unholy pact with Apocalypse. However, after being rejected by his contemporaries and his own wife, Essex had nothing left to live for... except science. 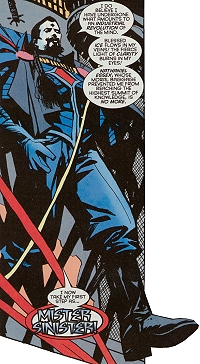 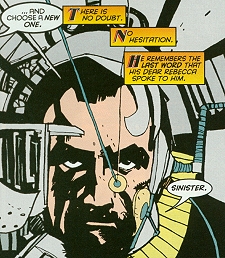 Essex entered the transformation machinery of Apocalypse. His new master told him that his old life and name were gone. "You must also lose your old name," said Apocalypse.

Transformed by the machinery of Apocalypse, Essex, now Sinister, had clarity of purpose, and immediately realized that this purpose was in direct opposition of Apocalypse's. He saw that Apocalypse's first command, that of the creation of a plague to ravage the population of the world, was madness... and poor science. While ice water now flowed through his veins, cruelty for its own purpose is ignorance. And ignorance, Sinister stated, is the greatest enemy of science.

Sinister decided to betray his new master. Instead of creating a plague to ravage and transmutate the world's population, he created a plague to attack only Apocalypse. Weakened by this attack Apocalypse returned to his hibernation sanctuary, where he demands of Sinister an explanation of his betrayal.

Apocalypse entered his hibernation chamber, which teleported away to safety. Cyclops and his partner, his wife Jean Grey, returned to their proper time, having successfully convinced Sinister to delay the rise of Apocalypse. Sinister was now left alone. [Further Adventures of Cyclops & Phoenix #1-4]

But alone to do what? From this story of his creation, we know the intentions of Mister Sinister. While being a very unnatural being, Sinister believed in natural evolution and eugenics. Not through genetic manipulation, but through selective breeding. By helping to match powerful bloodlines through selective pairings, Sinister hoped one day to create a mutant capable of doing what he himself could not, destroy Apocalypse.