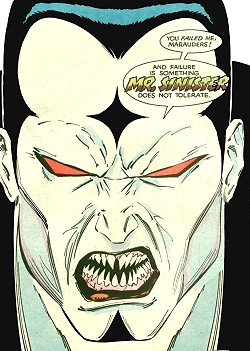 While Sinister has succeeded in his quest to eliminate Apocalypse, this has by no means ended his task. Mister Sinister desired research above all else in his world of genetics. Bloodlines and gene pools are his chess pieces. Apocalypse was a threat to this work. Now without hindrances, Sinister can truly begin his work in genetics, now matter the cost in lives or suffering. By eliminating Sinister's former master, the X-Men may have unleashed an even greater threat to the world.

Over the years, Sinister also shown interest in some other characters, some of them even being part of the Summers Tree too. Let’s take a closer look at who else Sinister was trying to manipulate and why :

As described earlier on, Sinister had Alex adopted away from the orphanage, as he thought Scott was the brother with greater potential. When he witnessed Alex first manifesting his plasma power he found him lacking any control over it, so he chose to erase the incident from young Alex‘ mind and leave him with his foster family. [X-Factor #minus 1] 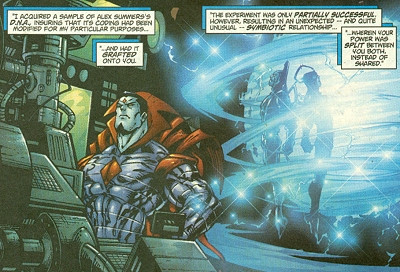 However despite devoting his attention to the molding of Scott, the scientist in Sinister must have been curious what Alex’s abilities would develop into. The perfect chance to study this ability presented itself in Ahmet Abdol, an egyptian non-mutant variant who could trace his lineage back to the ancient pharaohs. Abdol theorized that the pharaohs had actually been mutants tapping into cosmic energy, but after he lectured about it in front of the scientific and religious community of Cairo, he was hunted by an angry mob. On the run, Abdol and his wife had a car accident. When the crowd refused to help him rescue his loved one, Ahmed manifested a single energy beam. In one of his many disguises, Sinister approached him and offered to give Ahmet’s power potential a form through which he could fully release it. He then took a modified sample of Alex Summers‘ DNA and grafted it onto the egyptian. However the experiment was only partially successful – resulting in an unexpected and unusual symbiotic relationship, as Havok and the Living Monolith were absorbing the same cosmic energies. That is also the reason why the egyptian originally went after Havok; by isolating him in a containment chamber he increased his own energy input. [Marvel Graphic Novel #17, Uncanny X-Men #376] 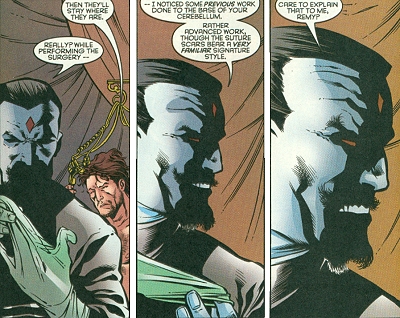 Next let us check the relationship between Mr. Sinister and Gambit. Operating under the alias Dr. Milbury, Sinister first met the cajun X-Man in 1891, as Remy LeBeau and the shapeshifting Courier were timetraveling to help the Thieves Guild. By accident they handed Sinister the means to adopt Courier’s shapeshifting power onto himself. After Gambit and Jackie had finished their task, one problem remained – they needed to get back to the present. Gambit had no other option than to ask Sinister for help. He told him to perform a delicate operation to his head, actually he wanted some brain tissue be put back in, that had earlier been removed to keep his uncontrollable powers in check. With his upgraded kinetic energy charging, Gambit could return himself and the Courier to the present day. [Gambit (3rd series) #13-15]

Nearly 100 years later, Mr. Sinister then helped the young Gambit when he manifests his mutant talent. Remy was unable to control his power and Sinister removed some part of his brain to limit the ability to a controllable degree. However by this operation, Gambit become indebted to Sinister, and the scientist kept the vial with the brain tissue as a reminder of that debt.

Over the years, Gambit had to perform various tasks, the last one being the assemblage of the Marauders. For this last job, Sinister returned Gambit the vial and considered the debt fully paid once he led the Marauders into the Morlock tunnels. Gambit claims to not have known of the villains deadly mission until it was too late. Once in the Morlock Alley the Marauders slaughtered anyone in sight; Gambit had no chance of stopping them and at least saved one Morlock girl (Marrow) from getting killed. [Uncanny X-Men #350]

Could it be the case that all of Sinister’s machinations only served one purpose, namely to make sure that Gambit would embark on that time-travel and give him the cell sample of the Courier ? This would get along with an incident during which some X-Men were held captive in Sinister’s base. He expressed concern over Gambit’s health (by then he still had to embarked on the timetravel) and mentioned that he expected something of him. [X-Men (2nd series) #52] Since Gambit returned from the year 1891 he and Sinister have not interacted yet, so we can’t know for sure if Sinister’s interest in Remy has now ended. 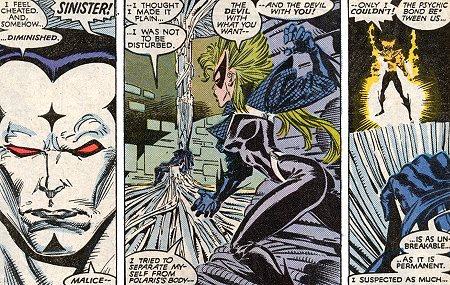 Another X-man that Sinister has shown a great interest in is Polaris. Although he could have manipulated Havok at any point in his life, he found his green haired lover much more worthy of his attention. Sinister said so during Inferno. His studies revealed that her energy matrix would interact perfectly with those of his Marauder Malice, and so he had her possess Polaris, resulting in the two females becoming permanently bonded. When malice later found out that she was stuck, she angrily blamed Sinister for keeping this information from her, but he calmed her down, stating that she was now unique and could not be replaced by a clone like the rest of the Marauders. [Uncanny X-Men #239] Readers know only too well that within the X-Universe “forever“ actually means “till they come up with something else“, and Lorna was freed of Malice as a side-effect of her powers getting stolen. Yet long months later, she had them back and became a mainstay of X-Factor. During this time Sinister again interfered twice in her life, though this time more or less as a guarding angel. Once he prevented Senator Steven Shaffran from causing the deaths of Havok and Polaris and said he can’t allow that for personal reasons; [X-Factor #75] in another occasion he sent Malice after Polaris again, yet in the end killed the psychic entity and allowed the X-Factor couple to leave. [X-Factor #105] Again his motives stayed a mystery, but the questions remains : what is it that makes Lorna Dane so special in Sinister’s eyes ?

Talking about the Mutant Massacre, Sinister real reason for having ordered the death of the underground community was revealed years later : The Dark Beast of the Age of Apocalypse crossed over to this reality (616) twenty years in the past. After settling in, McCoy continued his work in genetics and created the Morlocks. Maybe not all of them, but most of the community come from Dark Beast's lab or have been modified there with their memories of this being erased. Since in AoA Dark Beast learned genetics from AOA-Sinister his work on the Morlocks was recognized by 616 Sinister as being based on his own studies. To prevent further unauthorized usage of his theories he had the Marauders kill the Morlocks. [Cable (2nd series) #28] For similar reasons Sinister seems to have had a hand in the civil war on Genosha, as the Mutate Bonding process too is based on his own studies. 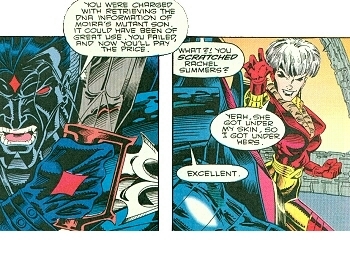 Once Mr. Sinister hired Siena Blaze through the Gamesmaster to aquire the DNA mapping of the dangerous mutant Proteus from Muir Island. Yet she failed to do the job, as she had a run in with Excalibur. At first Sinister was very annoyed, but his mood changed when he learned that during the fight Siena scratched the face of Phoenix III, aka Rachel Summers. From below Siena‘s fingernails, Sinister gathered some cells of Rachel and has gained a possibly more valuable prize than he originally wanted. [Excalibur #72-74]