Time passed. From the demonic dimension of Limbo came the powerful demon N'astirh. N'astrih corrupted Madelyne's soul and using his magic unlocked her latent mutant power and the dormant Phoenix Force portion. [Uncanny X-Men #234] Armed with new power and driven insane by N'astirh's corruption, Madelyne took the identity of the Goblin Queen and confronted Sinister in his underground genetics laboratory. There among the machines that created her, Madelyne learned of her true past and the reason for her existence. In fact, most of what we know about Sinister's actions comes from this very conversation. [Uncanny X-Men #240-241]

Incensed by the travesty of her existence, Madelyne took her son from the helpless Sinister and returned to New York. By this time the great city had been transformed into a demonic parody of itself through a conflict now called Inferno. Madelyne planned to sacrifice her child to N'astirh that would open a wider and permanent portal to Limbo escalating the localized Inferno conflict worldwide. Through this action, Madelyne felt that she would finally be free. She would have eliminated her child, the reason for which she was created, would have her revenge against Sinister for using her, would have revenge against a husband for leaving her and in the process gain the ultimate power that N'astirh promised her. [X-Factor #38]

Madelyne, N'astirh and their demonic allies were ultimately defeated by the combined forces of the X-Men, X-Factor, and other local heroes. By the end of the conflict Madelyne died, but not before giving the last of her memories and those of the Phoenix II to Jean. Both Phoenix II and Madelyne were gone from this world, but their memories would live on inside of Jean Grey. With the city returned to its normal form, the mystery and threat of Madelyne Pryor solved, and the child of Cyclops recovered, the combined forces of the X-Men and X-Factor returned to Xavier's mansion where waited the cause of all of their problems: Mister Sinister.

Sinister, along with his Marauders, waited for the X-Men and X-Factor to arrive. After losing his prize to the now deceased Goblyn Queen, he was no doubt anxious to get it back. The only thing that could stand in his way was the child's family, both blood and otherwise. Another possible motivation in facing the two teams was the acquisition of what he had long been denied, Jean Grey. After losing the clone he had so carefully created, Sinister finally had the opportunity to obtain the original. The two teams arrived at the mansion and were ambushed by the Marauders. After dispatching the Marauders, they confronted Sinister himself. [X-Factor #39]

Sinister's motives in the battle remains unclear. For the most part, Sinister seemed a match for both teams combined. At times Sinister appeared to be more interested in taunting Cyclops and prompting him to remember memories that Sinister had so painstakingly buried than eliminating the mutants or obtaining Jean Grey. 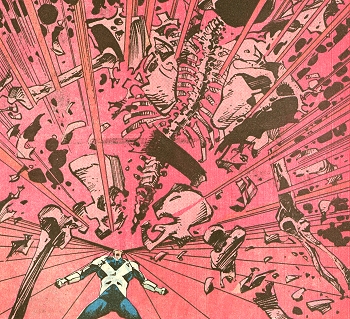 By the end of the conflict Sinister managed to provoke Cyclops into unleashing his full power and obliterate Sinister. It is very possible that Sinister knew that the X-Men, after learning of his involvement with Madelyne and Cyclops' son's disappearance, would be looking for revenge. Sinister probably knew that the teams would not rest until they had brought him to justice. Given that Sinister was seemingly obliterated, flesh seared from his bones and all, and turned up completely healthy months later, it is very likely that the entire battle was orchestrated by Sinister to make the teams believe that he was dead and no longer a threat. Sinister could then continue his work undisturbed.

After all of his meticulous work, it is unlikely that Sinister would have abandoned the Summers child. With the infant back in the hands of Cyclops and X-Factor, the child was in relatively safe hands. Another perk might have been that Scott and the original Jean together at last a new union might have been possible. This would have been an unlikely scenario if they had feared a lurking Sinister capable of turning up at any time to kidnap any new progeny.

For whatever reason Sinister faked his death and allowed his prize to escape his grasp, Sinister could not have foreseen what happened a few months later. Apocalypse determined that Nathan Christopher, the child of Cyclops and Madelyne, was a threat. Using his new servants, a group made up of renegade Inhumans called the Riders of the Storm (later Dark Riders), Apocalypse abducted the child and infected him with a deadly techno-organic virus. X-Factor tracked Apocalypse to his base on the Moon and confronted him. After a devastating battle X-Factor managed to defeat Apocalypse, seemingly killing him. The victory was short lived, as it appeared that Nathan Christopher was too soon to die from the virus. Cyclops' only chance to save his son came in the form of a woman from the future, who answered to the name Askani. Reluctantly, Cyclops gave his son to this woman, who claimed to have been sent back to protect the "Chosen One", which seemed to be the Summers baby. After a brief goodbye, Cyclops watched as his son was transported through time, apparently never to be seen again. [X-Factor #65-68]

Apocalypse would turn up months later quite alive. We do not know of the immediate reaction by Mister Sinister, but he could not have been happy. Cyclops and his X-Factor family were crushed, but tried to keep heart in the fact that it was Nathan Christopher's only chance for survival. It is doubtful that any of the people involved could have known that the mutant who had been mentoring Xavier's latest pupils, the New Mutants, would hold the answer to Nathan Christopher's fate. [New Mutants #86]