For months a mutant named Cable had taken over as leader and mentor to the leaderless New Mutants. What Cable had not admitted to the New Mutants, or anyone of that era, was that he was a soldier from the future. Cable originated from a time era two thousand years in the future. This future had been ravaged by Apocalypse. After a final conflict in the future, Apocalypse had been killed. Finally, after over five thousand years his threat was over, yet soon a new Canaanite government took over and they like Apocalypse before acted as superior mutant class, exploiting their underlings. Stryfe thought himself as legal heir to Apocalypse and tried to conquer the planet back, while Cable and his Clan Rebellion were fighting for peace and coexistence against both Canaanites and Stryfe. Finally both Cable and Stryfe failed when the Canaanites established full global control. Stryfe, refusing to acknowledge defeat traveled back in time to exacerbate the mutant uprising at its early years. Cable decided to follow his foe. The end of the 20th century being a very important era, they came to this time period to make their stand. While Cable recruited the leaderless New Mutants, Stryfe had formed a worldwide terrorist organization called the Mutant Liberation Front, or the MLF. The conflict of these two men reached a climax during the crisis called the X-Cutioner's Song.

The conflict called the X-Cutioner's Song in many ways was the culmination of so much of Sinister's plans and the plans of others. Sometime before the conflict, there seemed to have been an exchange of information between the time traveling mutant Stryfe and the eternal genetic tinker Mister Sinister. This most likely happened when Sinister journeyed to Stryfe's MLF headquarters to recover a lost operative who had been rescued by the MLF. [X-Factor #78] Once in Stryfe's presence, Sinister must have recognized who Stryfe truly was and decided to give Stryfe what he most wanted: revenge.

Stryfe was from the future and had been the ward of Apocalypse. However, Apocalypse had been unaware of the origin of the young boy that he had adopted. All that Apocalypse knew was that the boy was powerful and had unlimited potential. This boy would serve as a fine vessel into which Apocalypse could pour his own soul and take as his own. Over the past two thousand years Apocalypse had grown weaker and the host bodies he needs to merge with burned out faster and faster. Now the boy that was known as Stryfe could sustain him for millennia. During the conflict in this future that lead to his death, Apocalypse attempted to merge with Stryfe, only to discover that Stryfe was a clone and thus unfit for his uses. Apocalypse died with this knowledge.

At some point during this war with Cable in the future, Stryfe became aware of his parentage and that his true era of birth was two thousand years in the past. Stryfe was angered at the treatment he received from Apocalypse during his childhood and even more angered at the thought of being abandoned by his true parents. It is unclear when he learned that Scott Summers and Jean Grey/Madelyne Pryor were his parents, but as he operated for several years in the late 20th / early 21st century it is most likely that he learned it in the past. Since the X-Cutioner's Song conflict began shortly after his first meeting with Sinister, it is very likely that Stryfe learned it from him. Whenever and from whomever he learned of his parentage Stryfe would have learned of how he got into the future. Once again, Apocalypse had interfered with his life, infecting Stryfe as a baby causing him to be sent into the future, to be further tormented by Apocalypse there as well. With unfathomable anger, Stryfe set events in motion that culminated in the X-Cutioner's Song. 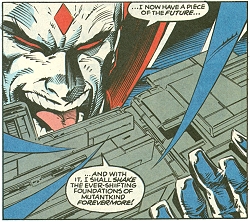 During the exchange of information between Stryfe and Sinister, Sinister learned of the lineage of Stryfe. Stryfe, in all of his power, was the culmination of Sinister's work for a weapon against Apocalypse. Sinister had to have been overjoyed to learn that this new weapon hated Apocalypse even more than Sinister did, and was actively working toward his destruction. Sinister made a deal with Stryfe that could not have been more to his liking. Stryfe offered to give Sinister a canister full of genetic samples from the Summers family line over the next two thousand years. Sinister must have been euphoric to possibly obtain the genetic samples for the next 100 generations of Summers. In return Stryfe simply asked for Sinister to produce Scott Summers and Jean Grey, upon whom he could heap his revenge.

Sinister complied, disguising himself as Apocalypse and ordering Apocalypse's forces to kidnap the pair. When Apocalypse awakened he would be angered and would be drawn into the fray between Stryfe and Xavier's forces. No doubt, Sinister hoped that during the ensuing conflict Apocalypse would be destroyed. Indeed Stryfe tried very hard and came very close to killing Apocalypse, but the Ancient Foe manages to escape. The conflict came to an apex at Apocalypse's old base on the Moon. Scott and Jean realized through Stryfe's less than subtle hints that he was their son sent into the future. Their long wondering about his fate now was over. By saving their son, they had turned him into a villain of immense power. Cable it seemed was an impure clone of Stryfe that needed bionic parts to survive. Cable and Stryfe struggled at the base's center. Wanting to put an end to Stryfe's madness once and for all, even though it meant his death, Cable activated a self-destruct and time-flux generator at the same time. He and Stryfe would be scattered through time, killing them both. [X-Cutioner's Song] 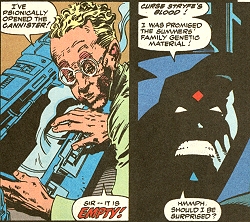 The X-Cutioner's Song conflict ended without much of a resolution. Cable survived and was sent to his future. After a brief rest he would return. While Stryfe's body was indeed destroyed by the explosion, his consciousness managed to live on in Cable's mind. Stryfe's personality would emerge several times and cause problems for Cable, but would eventually be expunged. The container that Sinister obtained from Stryfe turned out to be seemingly empty. Inside was the Legacy Virus, designed in the far future and brought back by Stryfe. By opening the container, Sinister unwittingly unleashed a deadly virus that would run rampant for years, killing mutants worldwide. A cure was eventually found, requiring the heroic sacrifice of Colossus to jump-start the process. [Uncanny X-Men #390]

Sinister must have been greatly displeased with the end of the X-Cutioner's Song conflict. The coveted Summers genetic matrix was a sham, Apocalypse yet lived, and both clone and original of his prized union seemed to be dead. His displeasure was short lived when Cable returned to the present and began anew his relationship with X-Force. At this moment Sinister decided to make a new policy with Cable. Cable was the weapon that Sinister had worked so hard to produce. In order to ensure that this weapon was aimed at the proper target, Sinister decided to entice Cable to his side with the most succulent of bait: the Truth.

Sinister confronted Cable and his partner, Domino, at the grave of Madelyne Pryor-Summers. Here Sinister gave Cable all of the answers he had been searching for. When all parties involved at the X-Cutioner's Song conflict learned of the lineage of Stryfe, they were taking Stryfe's word as true. Sinister now told Cable that they were all misinformed. 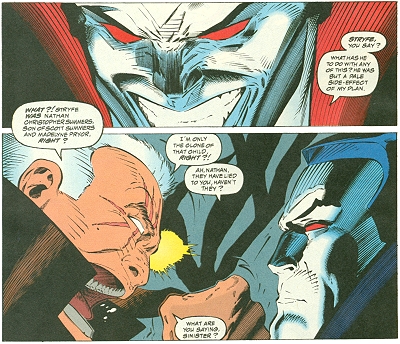 The true son of Scott Summers and Madelyne Pryor was Cable. Stryfe was the clone. Sinister further reveals to Cable that the arms dealer Tolliver, who had given Cable so much trouble over the past, was none of other than Cable's own son, Tyler.

As a parting gesture, Sinister unleashed the dormant Stryfe personality within Cable. Stryfe soon was drawn to Tyler's hidden base. Following shortly were Cyclops, Jean Grey and Professor X who had been warned by Domino of Stryfe's return. After a climactic battle, Stryfe abandoned Cable's body, seemingly dying in the process as Tyler fled. Cable, back in control of his own body, looked to Scott Summers and Jean Grey with new eyes, realizing that they were, in fact, his parents. [Cable (2nd series) #6-8]