For years Scott Summers served as the team leader for Xavier's X-Men. While Sinister could not have foreseen this turn of events for his pet project, Scott Summers, Sinister did not seem to be troubled. Indeed years went by before Sinister made any attempt to lure Scott away. It could be theorized that while Sinister had already found one parent of his needed champion against Apocalypse, Sinister was still searching for the other. Ultimately, he would decide on Jean Grey to fulfill this pair. But at what point did he make this decision? Evidence seems to point toward the appearance of the being known as Phoenix as being the moment of clarity for Mister Sinister. 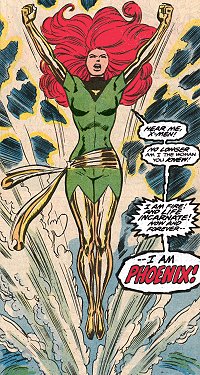 Shortly after the old guard of the X-Men was replaced with new members [Giant Sized X-Men #1] Jean Grey found herself on one more mission. After being taken into orbit on a Sentinel space station and fighting her way free with the rest of the X-Men, Jean was the only person capable of piloting the return shuttle back to Earth through a deadly radiation field. Knowing that she would not survive, Jean accepted this suicide mission. However, Jean did not die. After the shuttle crashed in New York's Jamaica Bay Jean Grey emerged from the water, transformed into the cosmically powered Phoenix II. Much future suffering could possibly have been avoided if the X-Men could only know that the Jean Grey before them was not their old friend, but the cosmic Phoenix Force given form. [Uncanny X-Men #98-101]

It would be years before the X-Men would learn that the being who arose from Jamaica Bay that day was not truly Jean Grey, but something far greater disguising itself as the mortal mutant. As the X-Men, who knew Jean as close friends were duped, so must have been Mister Sinister. Sinister had stated that he had noticed Jean as an emerging mutant at the same time as Xavier, but had acted too slowly and had lost her to Xavier and his X-Men. From this we can postulate that he had been studying her genetic potential as a match for Scott Summers for some time. We are even led to believe from a conversation between Sinister and the Goblin Queen, the demonic and Inferno magic infected Madelyne Pryor, that she was created as a clone of Jean Grey to study that potential. [Uncanny X-Men #241] However, during that conversation Sinister stated that he was disappointed that the clone manifested no powers at adolescence and he considered the whole project a waste of time and effort. This would lead one to believe that this method of cloning prospective parents for Sinister's genetic champion was an unusual procedure. A very possible reason for doing this might have been surprise at the level of powers that Phoenix II demonstrated; powers that Sinister would never have believed that Jean Grey, based on her genetics, would have had the ability to manifest.

It is probably at this pivotal moment that Sinister decided that he had his match. Much to his luck, Scott Summers and Jean Grey already seemed to be in love. A marriage and child between the two of them seemed 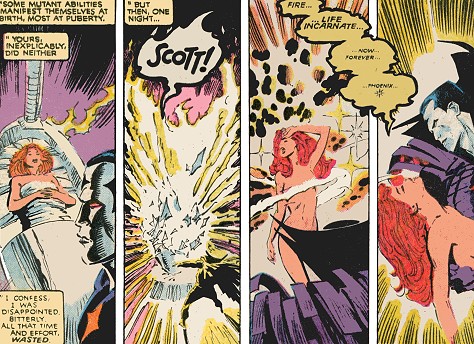 inevitable. As months passed Sinister was probably amazed when the Phoenix started to develop a malevolent personality and was undoubtedly horrified when this led to her apparent destruction on the Earth's moon. [Uncanny X-Men #137] Horror no doubt turned into delight when whatever Force that augmented Jean Grey's power, upon the death of Phoenix, found a new home in the clone of Jean Grey, named Madelyne Pryor. [Uncanny X-Men #241]

This unexpected turn of events must have been pleasing to Sinister. While the original Jean Grey was gone, he now had an exact clone with the same genetic potential and the same affinity to what Sinister soon realized was the Phoenix Force. More importantly, the clone was someone that Sinister could more easily control. Sinister named the clone Madelyne Pryor and swiftly created a false background accompanied with fabricated memories to explain the images of death and destruction that the Phoenix arrived with. Sinister placed Madelyne in Alaska near Scott Summers‘ grandparents. It would only be a short time before the two would meet. Madelyne would be conditioned to fall in love with Scott upon meeting him, and Scott would instinctively be drawn to a woman that so resembled his one true love. After setting the events in motion, Sinister did what he does best; he waited.

After a short while, Scott and Madelyne did meet. They began to date and they eventually got married. [Uncanny X-Men #168, 170, 175] After a few months, Madelyne learned she was pregnant. Nine months later (more or less) she gave birth to a son, Nathan Christopher Charles Summers. [X-Men and Alpha Flight (1st series) #1, Uncanny X-Men #201] The happy family moved to Alaska and tried to live a normal life away from mutants and villains. Sinister would later reveal that this move to Alaska was a subconscious suggestion to Madelyne in order to lure Scott and, more importantly, the child away from the X-Men. [X-Factor #39] 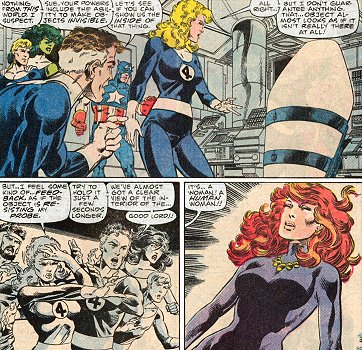 As the family settled in, Mister Sinister began to move in on his prize. However, before he could act, something that no one could have foreseen occurred, the real Jean Grey was discovered alive in a cocoon at the bottom of New York's Jamaica Bay. [Fantastic Four (1st series) #286]

The reemergence of the real Jean Grey could have proven devastating to Sinister's carefully orchestrated lie. After hearing the news, Scott ran to New York to discover if the impossible were true. While Scott was reunited with Jean and was being talked into forming a new mutant hunter/hero team called X-Factor [X-Factor #1], Sinister made his move. Knowing that the real Jean Grey would recognize Madelyne for the clone that she was, Sinister hired Madelyne under some alias to fly some cargo to San Francisco and used his subconscious influence to make Madelyne take along her son. Upon arrival in San Francisco, Madelyne was attacked by Sinister's Marauders. Using powers she didn't even know she possessed, Madelyne survived, but her baby was captured. At long last, Sinister had his prize. [X-Factor #38]

When Scott left Alaska to be reunited with Jean and formed X-Factor, he lost contact with Madelyne. After returning briefly to their home, he discovered the home abandoned. Assuming that Madelyne had left him and had taken their son, Scott was unaware of the attempted murder of Madelyne or the abduction of their son. After recovering from her wounds, Madelyne summoned, not Scott, but the X-Men who arrived in time 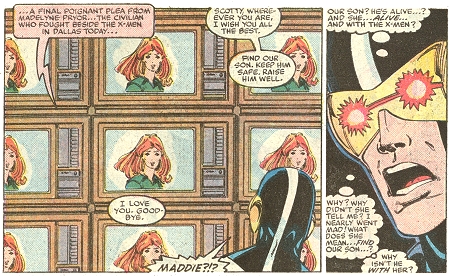 In reality, she and the rest of the X-Men were given new leases on life by Roma, the Celestial Majestrix. Scott, who watched Madelyne and the rest of the X-Men's apparent death on television, thought that the mystery of his wife's disappearance was over, even though it added to the mystery of his son's whereabouts. While both Scott and Madelyne worked in their respective teams, Sinister studied their son in his lab underneath the very orphanage where Scott had been raised.