Twenty some years ago a family by the name of Summers vacationed in Alaska. The Parents, Chris & Katherine Anne, were taking their two boys, Scott and Alex, on a trip. As an accomplished pilot and prospective astronaut Chris Summers had restored an old Dehaviland Mosquito and was flying the family above the Alaskan coastline. Without warning or provocation a scout ship from the alien Shi'ar Empire attacked their craft. [Uncanny X-Men #156] 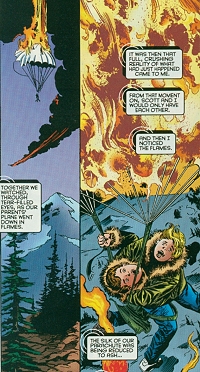 So much of what happened in the next few minutes are unclear yet have had far reaching ramifications. The events have either been blocked by brain damage or memory manipulation. The only first-hand account we truly have, is from the master deceiver himself, Mister Sinister .

As the two boys fell to Earth their lone parachute burned above them. Scott, the eldest of the two brothers, used his mutant powers for the very first time. Scott's power was that of generating powerful blasts of concussive force that emitted from his eyes. Years later, after donning a visor to help regulate this power, Scott would adopt the alias of Cyclops. In using his power at this moment the future Cyclops was able to slow his and his brother's rate of descent, allowing them to survive the fall. Unfortunately, Scott did not emerge from the fall unscathed. Scott suffered brain damage to the part of his brain that would control his optic blasts. As a result, Scott would be unable to control his powers on his own, and would require a visor or other ruby-quartz laced eyewear to stop his continuously emitting blasts. [X-Factor #39]

As we have seen, Sinister did have connections to the Summers' past. Before his transformation by Apocalypse, Sinister had held for study the young boy Daniel, who would later travel to the United States and become Daniel Summers. Years later, by coincidence or design, Sinister would later become affiliated with Daniel's estranged wife, Amanda Mueller. We know that Amanda was the director of a eugenics project called Black Womb with which, as of 1946, Sinister, under the guise of Dr. Milbury, was associated. [X-Men Forever #2]

It is unknown if Sinister had already become interested in the genetic potential of the Summers lineage by 1891, the time he had started his association with Amanda Mueller. While it is very possible that he no longer thought about Amanda's descendants after Daniel left his wife with their only son, it is more likely that Sinister kept track of this family all along. It was heavily implied during a conversation between the time traveling Gambit and the still human Amanda Mueller in 1891 that the several miscarriages suffered by Amanda by 1891 were of Sinister's design. As previously theorized Sinister could have induced early labor and faked miscarriages in order to study Amanda's progeny or stillborn fetus. [Gambit (3rd series) #13] 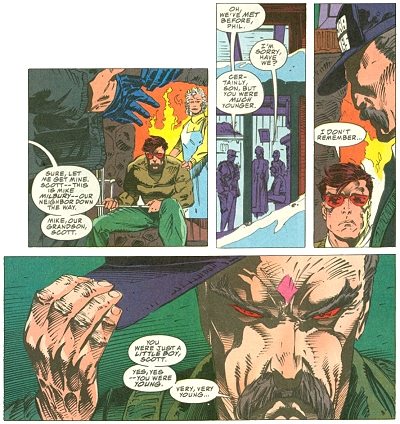 Sinister was also in contact with some ancestors of Scott Summers, namely his grandparents living in Alaska. For years Mr. Sinister has been posing as their neighbor Mike Milbury, still it is not known when exactly Sinister closed in on them and for what reason. [X-Men (2nd series) #22-23] It could be the case that he was already awaiting the expect mutant offspring, maybe already when Christopher Summers (Corsair) was born, or later when he himself had children, but we can’t know for sure.

While it is unclear at what point Sinister became aware of the potential of the Summer's line, or of Scott Summers himself, at this pivotal moment of Scott Summers life, Sinister became all too aware. Years later, during a conflict with the X-Men, Sinister would claim that the use of Cyclops blast at this early age registered on his mutant detection equipment, no doubt similar to Xavier's Cerebro or Cerebra. Sinister secretly visited Scott in the hospital. After the boy again demonstrated his deadly mutant power, Sinister injected him with a drug that placed the youth in a yearlong coma. [X-Factor #39]

By the time Scott awoke from his coma, Sinister had arranged for the two to be transferred to his orphanage. For Scott's brother, Alex, Sinister arranged for him to be adopted by the Blandings family where Sinister could keep tabs on him. Sinister had decided that of the two Summers brothers, Scott held the greatest genetic potential for his plan. Alex technically had access to more power, but Scott seemed to have better control. [X-Factor #minus 1] In hindsight, this is an odd decision, as when Scott's power develops he is unable to control his own optic blasts. Alex also has problems in the future as his power develops and for a while is forced to wear a suit, but eventually gains control. One possibility for Sinister choosing Scott from the two is a result of continuity retcon. In a flashback in X-Factor #39 we see Scott, shortly after the parachute incident, using his optic powers against Sinister. Years later, the Further Adventures of Cyclops & Phoenix miniseries depicted Scott and his future bride Jean Grey going back in time and witnessing the transformation of Nathan Essex to Mister Sinister. During that visit, Scott used his optic blasts. Years later, for Mister Sinister, when he first visited the young Scott in the hospital and witnessed the boy's optic blasts, Sinister could have remembered the similar powers of the mutant who tried to avert his transformation over a century before. [X-Factor #39]

No matter at what point Sinister became interested in the genes of either the Summers family, the Summers brothers, or Scott Summers himself, Sinister had placed Scott in his orphanage for observation. It is even possible that the roommate of Scott, a boy suspiciously named Nathan, was actually Sinister himself, or at least an ally that was recruited or manufactured. [Classic X-Men #41-42]

As Scott aged, Sinister continued to search for other mutants to bring to his orphanage. One such young mutant was a young Jean Grey. However, before Sinister could arrange for Jean's parents to be eliminated so that she could be brought to his orphanage, Jean was noticed and recruited by Professor Charles Xavier. [Uncanny X-Men #241] In teaching Jean to control her emerging telepathic and telekinetic powers, Xavier began to form the idea of a school. This school would be for mutants to not only learn about the world and their innate mutant powers, but to in turn become teachers to the world. They would teach Xavier's dream of tolerance and coexistence between humans and mutants while fighting those who would make it intolerant. In his late teens, Scott would eventually run away from the orphanage. While on the run, he would be found by Professor Xavier, who was already aware of Scott's existence, as well as his mutant gift. Xavier would recruit Scott as the first of his one-day legion X-Men and give him the alias of Cyclops.