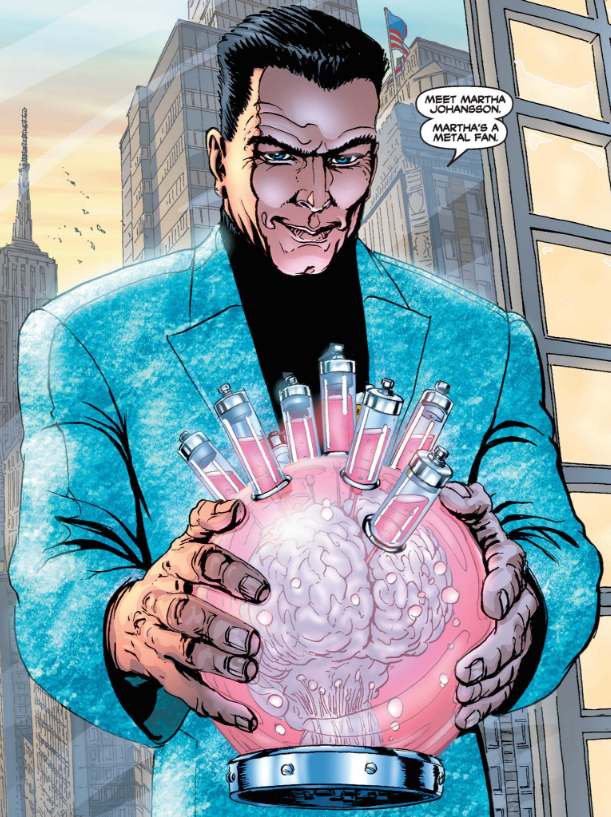 While news reports state that Martha Johansson was a mutant runaway who left behind a note written in her own luminous blood, these claims can hardly be trusted given who Martha would later be found in the hands of. If Martha had indeed run away from her previous life, she most likely regretted it when she was captured by the U-Men. Led by John Sublime, the U-Men were a fanatical group dedicated to creating a third species and harvested mutant body parts to do so. By the time they were done with Martha, all that was left of her was her disembodied, telepathic brain. Kept alive in a small glass capsule filled with fluids, John Sublime kept Martha’s brain close at hand. Controlling her by administering drugs through syringes, Martha was forced against her will to use her telepathic gifts to subdue Sublime’s adversaries.

When Cyclops and Emma Frost of the X-Men paid John Sublime a visit to investigate the U-Men, Sublime used Martha to broadcast ‘psycho-chaff,’ blinding their minds and allowing the U-Men to overtake them. Martha was then forced to keep the two X-Men unconscious as the U-Men prepared to dissect them but luckily Emma  managed to break through Martha’s psychic control. Cyclops and Emma 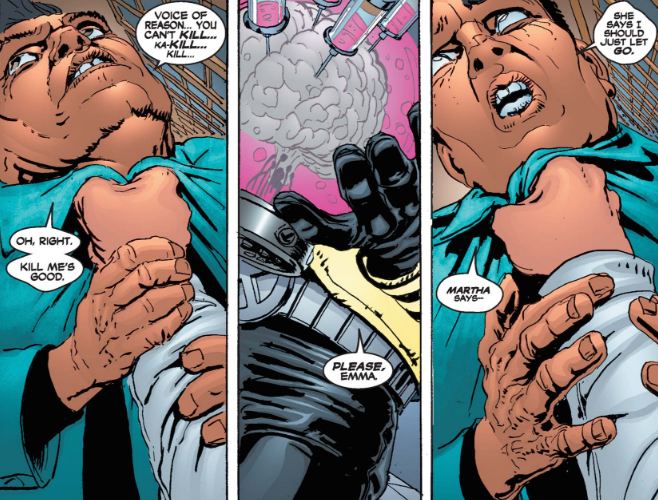 Frost fought through the U-Men, freeing Martha and then took her with them as they confronted Sublime once again in his office. As Emma dangled Sublime out of his office window, Martha ignored both Sublime’s pleas for mercy as well as Cyclops’ judgment and forced her former tormentor to let go of Emma and fall to his death. Cunningly, Martha even planted a news reporter on the ground in an effort to make Sublime’s demise seem like a suicide. [New X-Men (1st series) #118-120]

Martha was enrolled at the Xavier Institute and, due to her condition and past, was placed in the Special Class under the guidance of the new and mysterious X-Man called Xorn. She became fast friends with fellow special class student, Ernst, a super-strong mutant with the body of an elderly woman. Another of the institute’s students, Quentin Quire, had created a floating, anti-gravity 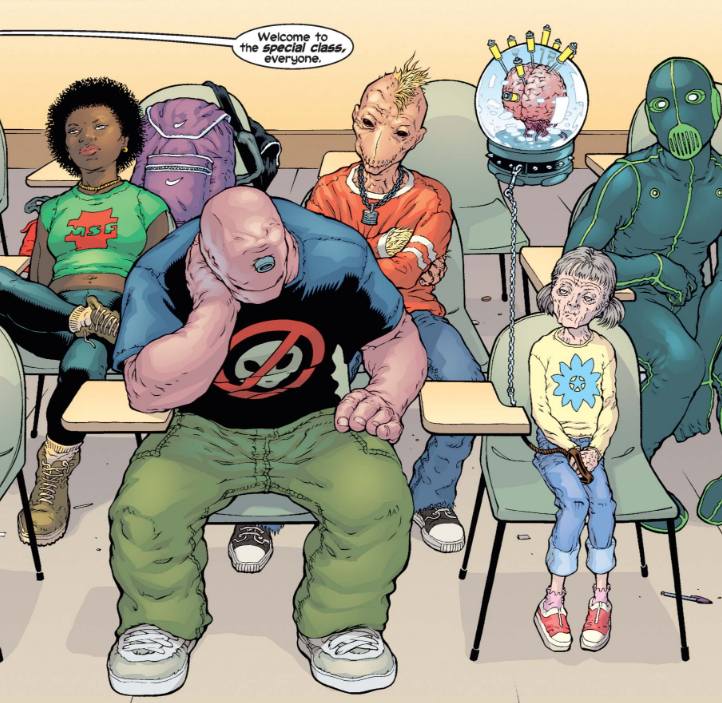 tank for Martha  to live in and Ernst would pull Martha’s capsule through the air with a chain-like leash, making the pair inseparable. The two even developed an inside joke, creating a fictional student to play pranks on their teacher and fellow classmates with. They called this imaginary being ‘No-Girl,’ a codename that Martha herself would later decide to take as her own. Ernst also acted as Martha’s means of communications, conveying Martha’s feelings and thoughts for her, as well as her protector, such as when the U-Men attacked the Special Class during a camping trip. [New X-Men (1st series) #134-136]

When Xorn revealed himself to be none other than Magneto, the Special Class fell in line as his new

Brotherhood of Mutants and assisted him in attacking Professor Xavier and destroying the school. Not only was Esme Cuckoo, Xorn’s devout follower, using Martha’s brain to influence the special class but they also seemed genuinely unsure of Magneto’s overall plans, their loyalty fading as Xorn grew more aggresive, killing thousands as he took over Manhattan. As Xorn, high on the drug Kick, lost control of himself and his brotherhood, Martha and Ernst warned him that he would soon be dead and stood with the X-Men as they took him down. [New X-Men (1st series) #146-150]

Upon returning to the rebuilt and reopened institute, Martha and Ernst kept a very low-profile, not being assigned to any student squad or participating in any field day activities. When M-Day struck, depowering a majority of the world’s mutant population, both Martha and Ernst were fortunate enough to retain their powers and were now part of a student body that consisted of a few dozen students. Although Martha and Ernst were excused from trying out to be part of the junior X-Men team, it didn’t prevent them from being dragged into some of their adventures, such as when Belasco kidnapped the entire student body and took them to Limbo. [New X-Men (2nd series) #23, 38]

When the first mutant since M-Day was born, various factions, including the X-Men, sought to either save, capture or destroy the newborn baby. By the end of the ordeal, the institute was reduced to rubble, Professor Xavier was thought to be dead and Cyclops had decided to disband the X-Men and close the school indefinitely. With nowhere to go, Martha stayed in the remains of Beast’s underground labs. When Beast came to collect his things, he rescued Martha from her loneliness, promising her that the X-Men had found a new home. [X-Men: Divided We Stand #2]

That place would turn out to be San Francisco and Martha would soon find herself living on Utopia, a mutant community off the coast, under the rule and leadership of Cyclops. Shortly after moving there, Utopia fell under attack by an awakened and vengeful Quentin Quire. Quire planned to destroy the island and warned no one but Martha of his plans, giving her eight minutes to stop him. Martha desperately tried to warn others using her telepathy but Quentin blocked her at every turn 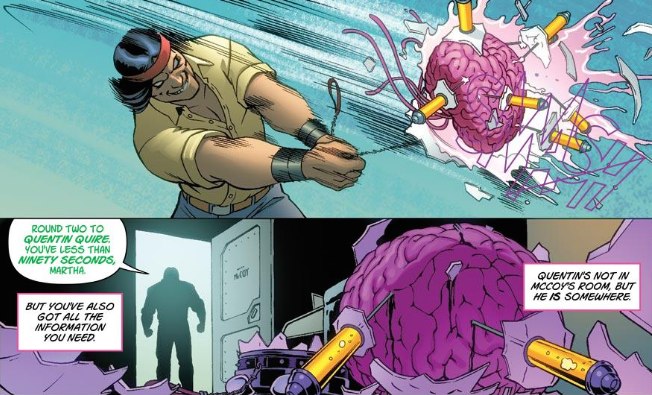 and, after inhabiting Warpath’s body and smashing her glass body against the wall, Quentin assumed the fight was over.  Not willing to give up, Martha managed to piece clues together and figured out where Quentin was headed. Remaining one step ahead of her foe, Martha found Quentin’s consciousness in Cerebra and worked with the Stepford Cuckoos to defeat him in the nick of time. Even as she lay on the floor, helplessly awaiting assistance, Martha couldn’t help but feel proud of herself for saving the day and she came out of the incident with a new yearning for heroics. [Nation X #2] 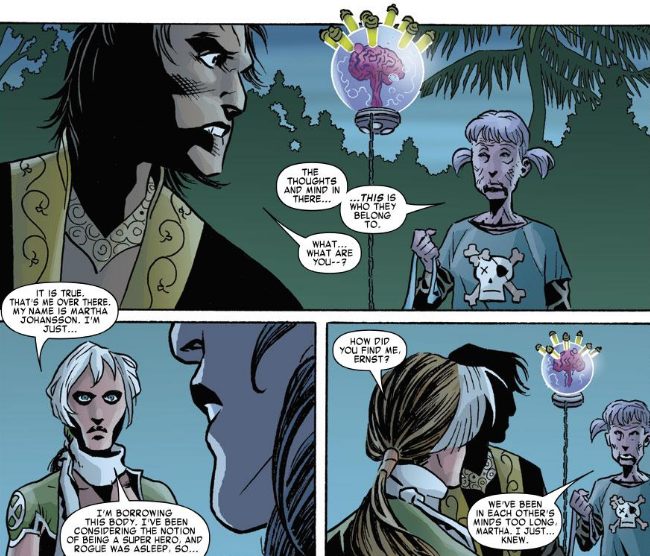 When the X-Men needed to defend San Francisco from a vampire invasion, Martha saw it as her chance to practice some heroics. Taking over Rogue’s body, she went out in the middle of  the night to save victims of vampire attacks but got more than she bargained for when she met a vampire named Damen. Believing that Martha was reincarnated from his lost lover’s soul, Damen offered to make her a vampire, which would allow her to live permanently in Rogue’s body. Martha briefly considered the tempting offer even though she revealed that she had grown accustomed to being simply a brain, defending the purity of her natural form against Damen's insults. Ernst persuaded her not to do it and upon kissing Damen, Martha realized that vampires were indeed soulless creatures, for Damen had no lifeforce for Rogue’s powers to absorb. Damen agreed with the sad truth he had long been denying and allowed Martha to end his existence. [X-Men: Curse of the Mutants - X-Men Vs. Vampires #1]

After an explosive argument over the way the younger generation of mutants were being treated, Wolverine decided to part ways from Cyclops and reopen the school in Westchester. Perhaps hoping for more chances at heroics, Martha was one of the few students who stayed behind on Utopia to serve as Cyclops’ recruits. [X-Men: Regenesis #1] 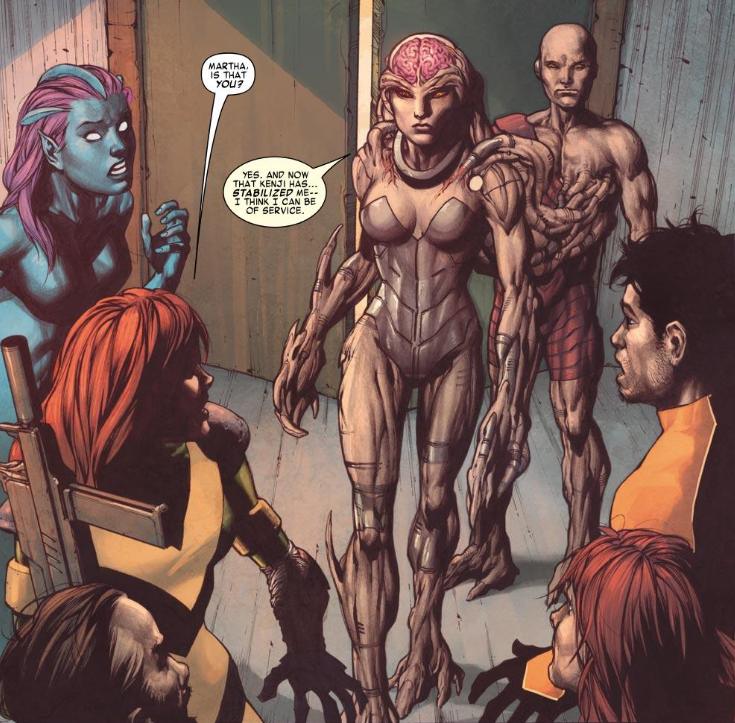 Martha soon got another taste of action when fellow X-Men recruit Kenji Uedo took a particular interest in her. Codenamed Zero, Kenji was a newer mutant working under Hope Summers, called  mutant messiah by some, in a group of newly emerged mutants known as the Lights. A skilled artist, Kenji was fascinated by Martha’s lack of body and her abilities and invited her to join the Lights on a mission to encounter a mysterious mutant signature in Pakistan. The outing proved far more dangerous than anyone anticipated and the band of young mutants were caught in an explosion, destroying No-Girl’s capsule. Unable to return back to Utopia, Zero improvised and created a body for her using his techno-organic creation powers.

Upon returning home, Martha was more than happy to stay in her new body even though it meant being attached to Kenji at all times. Martha was able to experience life in a way she had not been able to in years and Kenji was more than willing to continue hosting a body for her. Being literally inseparable, it was not long before the two found themselves in the midst of a somewhat romantic relationship. 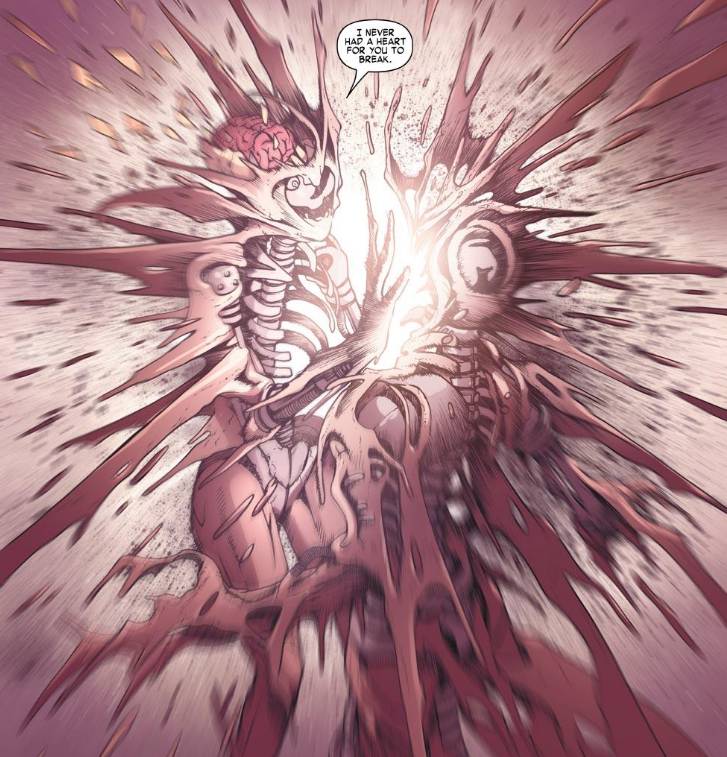 Unfortunately, neither love nor a permanent body were in the cards for Martha as she soon realized she had been the victim of an elaborate manipulation.  Kenji had been growing increasingly resentful and jealous of the control that Hope had over him and the other Lights. Wanting access to Martha’s mind control powers, Kenji allowed her container to be destroyed in the bomb blast, knowing that providing her with a new body would give him access to her mind and powers. Using a combination of his own mutant abilities and Martha’s telepathy, he controlled the citizens of Utopia, including the X-Men, and staged a riot calling for Hope’s death. Hope managed to reveal the bitter truth to Martha just in time and Martha responded by using her psycho-chaff to block Kenji from using his powers, causing the destruction of both his and her techno-organic bodies. Martha's brain was saved and was once again housed in a new unit but Kenji seemingly perished. [Generation Hope #13-17]

After the Avengers and X-Men went to war over the how to handle the Phoenix Force, Cyclops' reign on Utopia came to a disastrous end. Martha ended up transferring to the Jean Grey School, the school Wolverine reopened in Westchester. Enrolled there, Martha was reunited with old friends and seemed to transition back into the school setting nicely and thanks to her new capsule, Martha was now able to move around on her own. [Wolverine and the X-Men (1st series) #15]