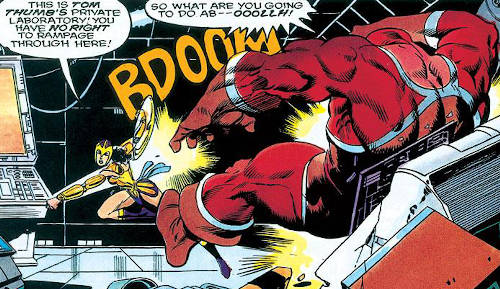 Not only did the Squadron resolve to end the utopia program, but they also decided to disband the Squadron Supreme itself. After a week of slowly forming a plan on how to dismantle everything, Zarda came to blows with Redeemer Redstone when he impatiently tried to destroy the Squadron’s laboratory. Power Princess regretted her impulsiveness immediately afterwards, and put it down to being stir-crazy from inactivity.

An end to the inactivity soon came, though it was not something Zarda, or anyone else on Earth would have wished for. The Nth Man, an other-dimensional threat, had appeared near the sun and begun growing at an exponential rate. They quickly realized he would soon destroy not only the Earth, but the entire universe. Now sharing leadership of the Squadron with her lover Hyperion, 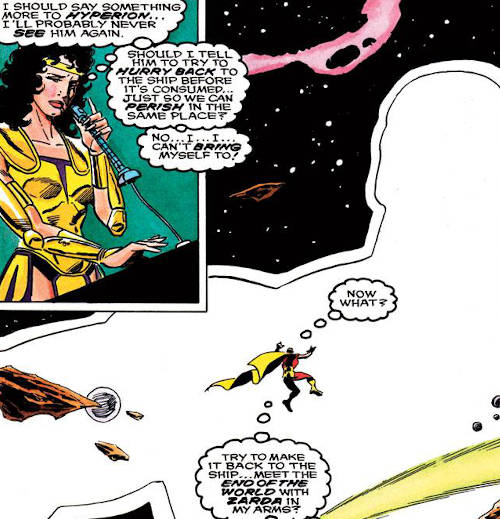 Power Princess took the team into space to intercept the colossal being. Unfortunately, the device they deployed to teleport the Nth Man away failed. Throughout it all, Power Princess remained stoic and strong for her teammates, but inside she was a storm of emotions. With the love of her life, Hyperion, left out in space Zarda agonized over the fact she couldn’t spend her last moments with him. She contemplated telling him the true depths of her feelings but couldn’t bring herself to say the words.

Ultimately, while the Squadron failed, the universe was saved by the son of Zarda’s teammate, Arcanna. The magical infant swapped places with the Nth Man and reversed the damage he had done. [Squadron Supreme: Death of a Universe]

Unfortunately, something went wrong when the Squadron were saved from being absorbed by the Nth Man and they wound up Earth-616, home of the Avengers. Power Princess and her teammates befriended the cosmic Avenger Quasar, who gave them a home within Project Pegasus. Unfortunately, their return to this reality also awoke the Overmind, the team’s old foe, 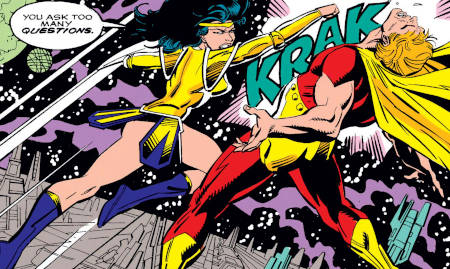 who seemingly had fled to Earth-616 after their last encounter. Much as with their last encounter with the Overmind, Zarda and most of the Squadron fell under his mental dominion, with only Hyperion escaping. The Overmind took the Squadron into space as his muscle to face his old enemy, the Stranger, followed by Hyperion and Quasar. Zarda was forced to attack the man she loved, though fortunately Hyperion was able to hold her off until the Overmind’s mind control was broken. [Quasar (1st series) #13-16]

Quasar attempted to help Power Princess and her teammates get home in several ways but each was unsuccessful. While they continued to search from a solution to their predicament, Zarda and the Squadron made themselves useful acting as Project Pegasus’ extra-terrestrial and extra-dimensional investigation team. During an encounter with a rogue prisoner in the Project, the Angler, Zarda was badly injured, though she nevertheless soon recovered. [Quasar (1st series) #51-53]

Later, when the city of Atlantis was raised to the surface, Power Princess saw a similarity between this city at her own Utopia Ilse. She set off immediately to investigate any connections between the Atlanteans and the Utopians, but ultimately found nothing. She would likely have been better off directing her attention at the Inhumans who, like the Utopians, were genetically adapted by the Kree. [Fantastic Four Unlimited #11]

Once again, the Squadron Supreme fell under the mental control of an enemy, this time the Corruptor. Working for billionaire Imus Champion, the Corruptor manipulated the Squadron into believing the Avengers were in fact imposters and the teams fought on two occasions. Power 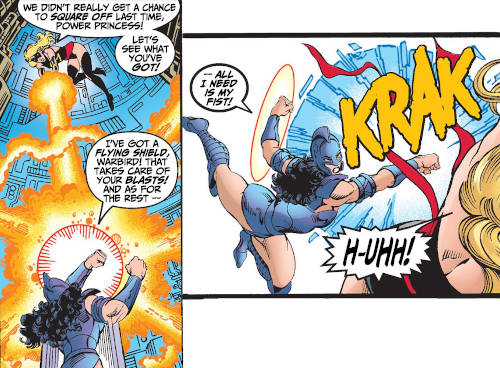 Princess fought with the likes of Iron Man, Thor and Warbird and proved more than a match for each of them. Fortunately, the Avengers helped free the team from the control of the Corruptor, though they were unaware of Champion’s involvement. [Avengers (3rd series) 5-6]

Imus Champion didn’t take long to reveal himself though, as he soon lured the Avengers and the Squadron Supreme into a trap. His intent was to fight the heroes two at a time, with each pair comprised of members of each team, all to prove himself their better. To force the heroes to comply, Champion used the threat of mass murder to force their hand. Reluctantly, the two teams separated into pairs to find and stop Champion and Power Princess requested to be paired up with the Avenger Firestar. She sensed the young Avenger was deeply by troubled by something and wanted to offer her aid where she could. Her people felt doing good was more than just fighting evil. When the two battled with Champion, he managed the get the best of the battle-hardened woman through trickery, though fortunately the Avengers member Hank Pym ultimately managed to take down Champion.

With the Champion’s stolen technology, Pym, Iron Man and Magdalene were able to construct a portal to finally send the Squadron Supreme Home. [Avengers/Squadron Supreme Annual '98] 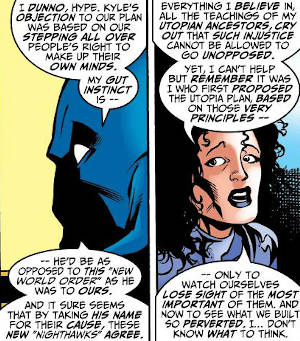 Back on their own world, Earth-712, the team found the world under the leadership of an oppressive Global Directorate. Zarda was dismayed to learn that the Directorate had perverted the Utopia Program, which she had originally proposed, and was now leading an oppressive regime and using the behavior modification technology to control criminals. The team were rescued from the Directorate’s stormtroopers, the Blue Eagles, by the new Wizard Supreme, Mysterium, who sent them to Zarda’s homeland Utopia Isle and told them to reunite the original Squadron Supreme.

Zarda travelled to the depths of the ocean to meet with the Amphibian, who had left the team out of protest during the early days of the Utopia Program. Reunited with Skymax, the Skrullian 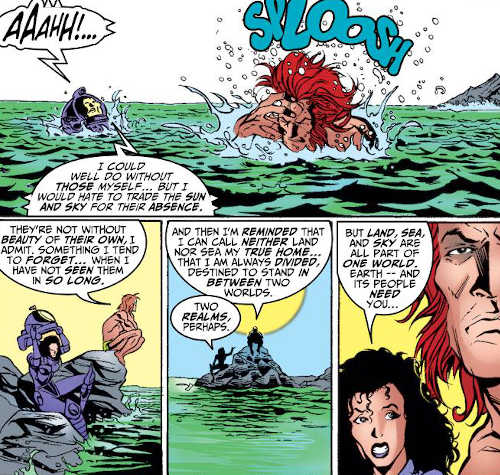 Skymaster, and the new Nighthawk, the Squadron launched an assault on the Global Directorate. However, they ceased when they discovered the group had been elected legally, not willing to force their will on the people once more like they had with the Utopia Program. The team were resolute in their commitment to opposing the Global Directorate, they just had to figure out how. [Squadron Supreme: New World Order #1]