Soon the Blue Eagles found the team on Utopia Ilse and launched a massive attack on the island. Zarda resigned herself to death, but a surprise rescue came in the form of reality traveler Proteus. Proteus, actually a sadistic killer, manipulated the team into believing he was fleeing from the Exiles, a group that repaired damaged realities who Hyperion had recently crossed paths with. When the Exiles arrived soon after, the Squadron captured them and put them on trial for perceived crimes against reality, and Power Princess took the role of prosecutor. The Exiles soon proved their innocence and, with their access to the multiverse, they were able to provide information that helped the Squadron overthrow the Global Directorate. In thanks for the Exiles’ aid, and unwilling to let a dangerous psychopath lose in the multiverse, Power Princess insisted she accompany the Exiles on their hunt for Proteus. While the Exiles were reluctant, Zarda convinced them with her centuries of experience she would be an asset. [Exiles (1st series) #77-78]

Never the most tactful person, Zarda immediately began issuing orders to the Exiles and assumed command, much to their chagrin. However, as the Exiles’s current leader, Blink, had incurred several personal failures, including the death of her lover at the hands of Proteus, she willingly ceded leadership to Power Princess. When Zarda learned the parasitic Proteus was targeting a 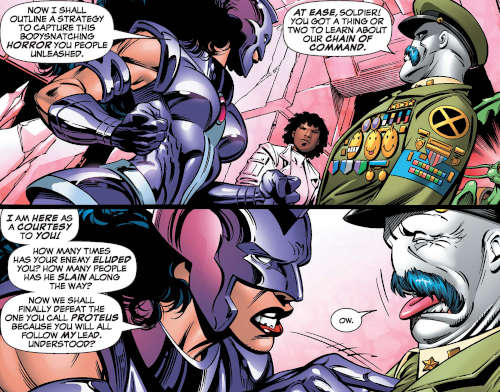 new host, a future version of the Hulk known as the Maestro, she concocted a plan. Rather than continue chasing Proteus, Zarda had the Exiles form an alliance with the Maestro and intercept Proteus when he came to possess him. The plan worked extremely well at first, until, in the confusion of the subsequent fight with Proteus, Power Princess accidentally struck the Maestro with a blade. This enraged the Maestro and, in the ensuing chaos, not only did Proteus escape but he managed to possess the Exile Morph. [Exiles (1st series) #79-80]

After Zarda’s failure and the loss of Morph, Blink had a renewed bought of confidence and took back control of the team. A new plan of attack was formed, one which required Power Princess to steal the behavior modification technology from her own world. With the technological know-how of fellow Exile, the Spider-Man of 2099, the Exiles were able to create a portable brainwashing device that wiped all of Proteus’ memories and made him believe he was Morph. [Exiles (1st series) #81-82] 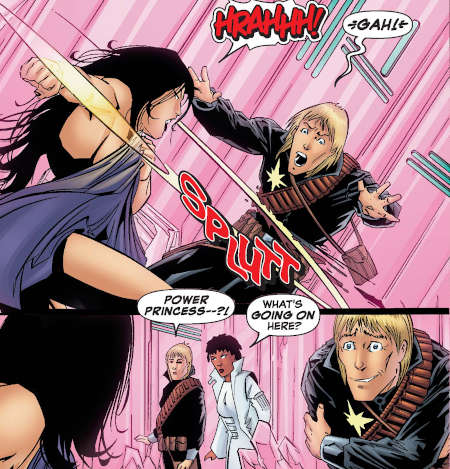 past tense on a few occasions before her teammate pulled her up on it. Perhaps because she was serving with relative strangers, rather than longtime friends, but Zarda was fairly rude and standoffish with her new teammates. Despite this, she provided honest and helpful advice to Blink when she struggled to decide what to do with her late love Mimic’s body. Tensions with her teammates were not helped when she caught Morph spying on her while bathing, though she grew closer with the rest of the Exiles when they were all left stranded on a world for a while. [Exiles (1st series) #83-86]

For a time, Power Princess served as an integral member of the Exiles, and completed multiple missions alongside her new teammates. Eventually, she decided the fate of the multiverse was in 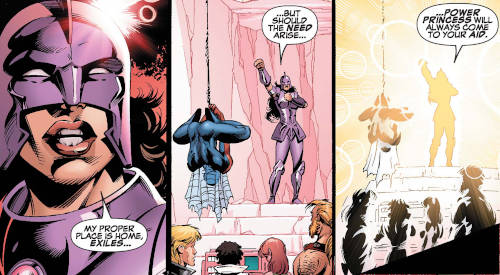 good hands and her true place was with the Squadron Supreme. She promised the Exiles she would always be there for them if they needed her and said goodbye. [Exiles (1st series) #90]

When Reed Richards of Earth-1610 sent out probes to explore the multiverse, they were sabotaged by Doctor Doom and ended causing massive destruction to the Squadron’s world and at least one other world. While investigating the origin of the probe, Zarda and the rest of the Squadron were mysteriously pulled through to another reality where they discovered another version of the Squadron fighting a collection of the heroes from Earth-1610. An errant spell cast by the Scarlet Witch was what drew Zarda’s team to this world and it also caused them to become mentally linked. Zarda and her counterpart shared the same thoughts and had trouble thinking straight. After an obligatory scuffle with the other Squadron and all these other heroes, the Scarlet Witch was able to reverse her spell and send Power Princess and her teammates home. [Ultimate Power #7-9]

Whilst the Squadron Supreme had been able to prevent the destruction of their universe once years before, they were unable to do it a second time. When the cascading collapse of all realties, known as the Incursions, claimed Earth-712, Zarda somehow miraculously survived, shunted 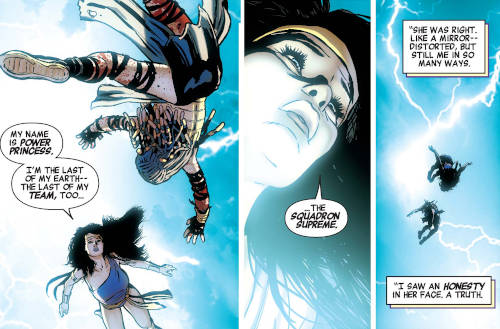 into a void between worlds. Drifting in the void, she crossed paths with an alternate version of herself, the Warrior Woman. She reached out to her “sister” but unfortunately this other Zarda was not the paragon of virtue she was. Warrior Woman was a member of the Squadron Sinister on her world leached away Power Princess’ lifeforce and left her for dead in the void. [Squadron Supreme (4th series) #9]

Zarda barley survived this attack and was left drifting through the void. Eventually, her health recovered, though her powers were gone; she was now essentially human. Once her strength returned, she was able to pull herself out of the void and onto Earth-616. It was there she discovered Warrior Woman had stolen her identity and had been posing as her amongst a new Squadron Supreme consisting of heroes from various destroyed realities. By the time Zarda had found her way to Earth, Warrior Woman had revealed herself to the Squadron and betrayed the team. Zarda spent her time spying on Warrior Woman as she and her ally Modred the Mystic raised an alien army and took over the country of Alambra, and learned of their plans to resurrect Namor as an ally in their cause.

With no powers or connection in this world, Zarda sought out aid in the form of Warrior Woman’s former allies, the new Squadron Supreme. Power Princess and the Squadron Supreme raced to stop Warrior Woman from resurrecting Namor with Reed Richards’ time machine. Though powerless, Zarda still chose to engage the woman who had stolen her strength in combat. Given 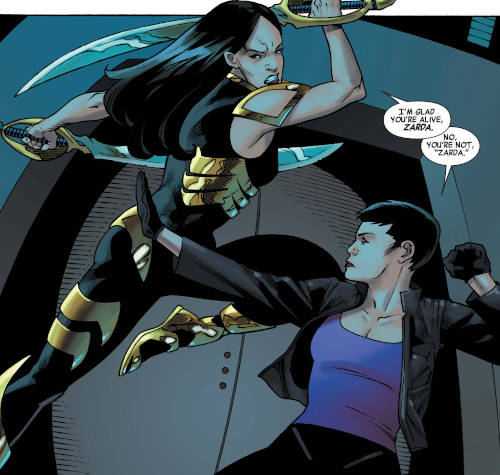 her hundreds of years of combat training, Zarda held her own against her much stronger opponent. However, when SHIELD tried to intervene, Warrior Woman seized an opportunity and killed some agents then fled. When more agents arrived, it appeared as if Zarda had killed them herself, forcing her to run. Warrior Woman had essentially framed Power Princess for murder [Squadron Supreme (4th series) #10-13]

Depowered and on the run on a foreign Earth, things couldn’t be worse for Zarda, but if anyone can recover from such an ordeal it would be the immortal warrior… Power Princess!