Little is known about the early years of St. John Allerdyce. Presumably, the man was born and raised in Australia, though he was sometimes confused for British, suggesting he may have spent some time there. He was also a published writer prior to turning to a life or crime. Presumably his mutant abilities to manipulate flame manifested during adolescence like most mutants.

At some point after he immigrated to the United States, St. John was recruited by Mystique into a new incarnation of the Brotherhood of Evil Mutants, taking the name Pyro. It wasn’t an easy transition, though, and he quickly butted heads with the Blob, arguing with the man and threatening him with his flame. 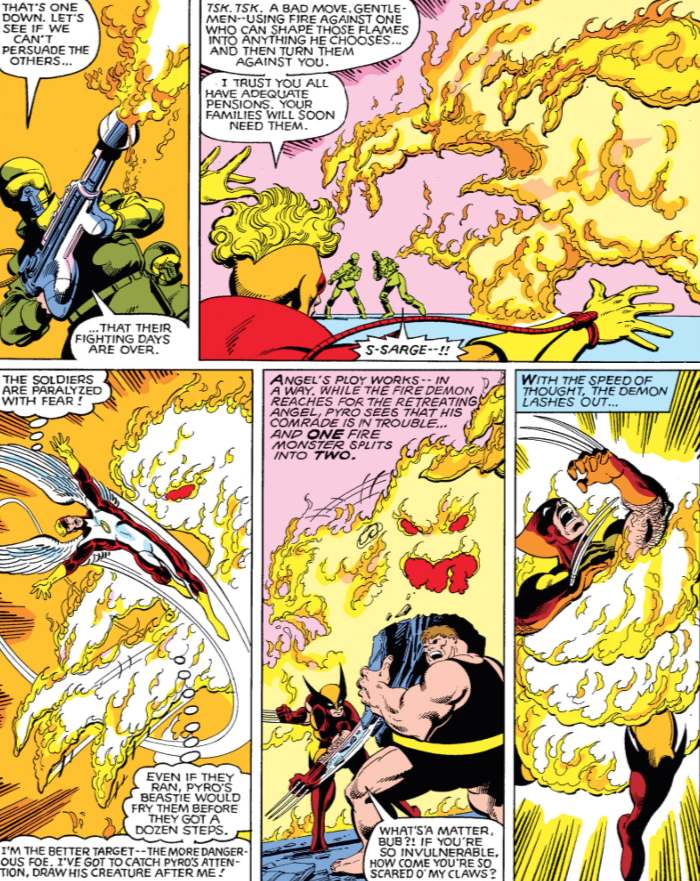 The Brotherhood’s first mission was to assassinate Senator John Kelly, a US politician who was a proponent of the Mutant Registration Act being debated in Congress. Unfortunately for the Brotherhood and their plans, this also lead to their first ever encounter with the X-Men, who had been warned of the Brotherhood’s plans and rushed to save the Senator. Despite his inexperience in battle, Pyro proved himself a formidable foe, fighting both the X-Men and the US army with flame giants. Ultimately, the Brotherhood were thwarted by the X-Men and sent to prison, all save Mystique. [Uncanny X-Men (1st series) #141-142]

Mystique quickly hatched a plan to free her teammates from prison but this endeavor too faced unexpected opposition, this time in the form of the Avengers. Once again, Pyro held his own against more experienced & powerful heroes. Using Destiny’s predictions as a guide, Pyro managed to briefly take down Wonder Man with a hammer of flame and threatened the entire team with a gigantic flame beast. It was only by the unpredictable powers of the Scarlet Witch that Pyro was defeated. Once more, most of the team, including Pyro, were recaptured and sent back to prison. [Avengers Annual (1st series) #10]

Mystique presumably managed to break her comrades out of prison eventually, as the next time Pyro and his comrades were seen they were free and preparing a trap for the X-Men. During the battle, Pryo demonstrated teamwork, as when he set up Colossus for his teammate Avalanche by heating the metallic X-Man to a white hot temperature so that Avalanche could dump liquid nitrogen on him, rendering the X-Man frozen and brittle. However, Pyro met his match in Storm, who doused him in monsoonal rain, rendering his abilities useless. Though defeated, Pyro and his teammates

Things took a surprising turn for Pyro and the rest of the Brotherhood when Mystique volunteered the services of the team to the US government in exchange for full pardons. Newly christened as Freedom Force, the group’s first mission was to capture the former mutant terrorist Magneto. As Magneto was residing with the X-Men at the time, this led to a rematch between Pyro and Colossus, who this time took the villain down with a single punch. However, as Pyro and his teammates were operating legally, the X-Men were powerless to stop the new Freedom Force, especially once Magneto willingly surrendered himself to their custody. [Uncanny X-Men (1st series) #199]

Pyro’s role with Freedom Force led him into clashes with superhero teams on numerous occasions, including the X-Men, Avengers and X-Factor. Whilst attempting to arrest the X-Men, he showed great concern regarding the collateral damage they were causing, fearing they might lose their sweet government gig. [Uncanny X-Men (1st series) #206, Avengers Annual (1st series) #15, X-Factor (1st series) #8-10]

When the X-Men showed up in Dallas, the US government sent Freedom Force to arrest them. However, Pyro and his teammates became embroiled in the X-Men’s battle with the powerful Adversary, whose time displaced creatures threatened innocent civilians. Pyro himself worked alongside Longshot to save children from a T-Rex, incinerating the beast in the process and enjoying the praised heaped on him by those he saved. Pyro and the rest of Freedom Force then witnessed the X-Men apparently sacrifice their lives to stop their mutual foe. [Uncanny X-Men (1st series) #223-227] 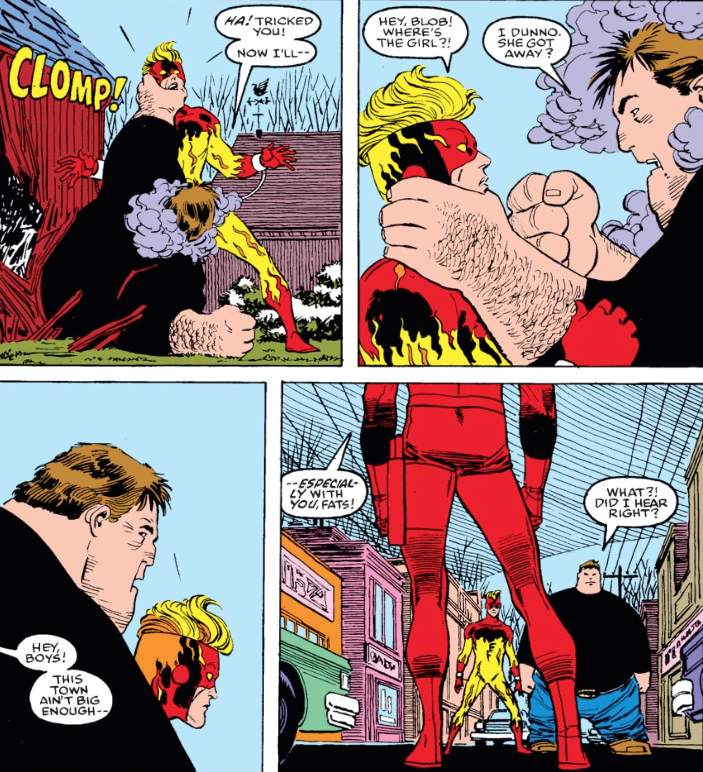 Later, Freedom Force’s role as enforcers of the Mutant Registration Act saw Pyro and Blob travelling to a small town to force a young woman to register. The pair immediately made their presence known, intimidating the townsfolk and forcing them to bring the girl to them while they drank at a bar. By coincidence, the superhero Daredevil happened to be in town and moved to thwart the pair. To even the odds in a fight, Daredevil got the pair drunk by offering them drinks in his civilian identity. Despite his inebriation, the drunk Pyro managed to knock the hero out and take custody of the girl. Unfortunately, the Blob was a tougher opponent and Pyro found himself fighting his teammate when Daredevil tricked the Blob into becoming jealous that the Aussie was always getting the girls on their missions. Upon realizing the girl had slipped away during their tussle, the pair clashed again with Daredevil, who managed to injure Pyro’s arms and help the girl escape. [Daredevil (1st series) #269]

Not all missions ended in failure however. In a mission soon thereafter, Pyro’s ability to control flame proved instrumental in capturing the pyrokinetic New Mutant, Rusty Collins, and in facing off against Firestar. [New Mutants (1st series) #78-82, 86, Marvel comics Presents (1st series) #84-86]

Things took a troubling turn for St. John when Freedom Force was sent to Muir Island to aid the X-Men's associates, who had come under attack by the Reavers. When Freedom Force's plane was brought down by the Reavers, Pyro saved everyone from incineration by controlling the explosion. However, the mentally ill Legion, a resident at Muir Island, was delighting in manipulating events and messing with the combatants. Legion used his pyrokinesis to smother St. John’s flames,

rendering him unable to save his teammate Stonewall from a flurry of bullets. To make matters worse, his longtime teammate Destiny was also murdered by Legion.

With the team under heavy fire from the Reavers, things seemed dire for Freedom Force. Pyro and Mystique shared a touching moment as the Reavers moved in for the kill. Though he had always expected to die in such a way, Pyro lamented that he wouldn’t learn if his latest book was a bestseller. Fortunately for him, he and his teammates were saved by Forge and the others, and managed to drive the Reavers away. [Uncanny X-Men (1st series) #255]

With Mystique away mourning Destiny’s death, Pyro, Avalanche and Blob considered themselves free agents and decided to attack the Avengers. While the trio initially fared well against the Avengers, the heroes quickly figured out Pyro’s weakness. Realizing that he could only control flame and not create it, they targeted his flamethrower. Defeated, St. John’s quick thinking had him using his government position to try and convince some policemen to arrest the Avengers. Instead, he inadvertently caused a riot and used the chaos to escape. [Avengers (1st series) #312]

Pyro’s time with Freedom Force came to an end soon after. Mystique had presumably been killed by a Shadow King possessed Val Cooper (when in fact she survived and took Cooper’s place). Crimson Commando led the team on a mission to Iraq to retrieve a nuclear physicist named Kurtzmann. Things turned south very quickly: Super Sabre was beheaded, Crimson Commando maimed and the rest of the group were attacked by an Iraqi superhero team, the Desert Sword. Beaten, Pyro remembered the orders and burned Kurtzmann to death so that the Iraqi government couldn’t have him, upsetting his comrade Avalanche. Outnumbered and outclassed, Pyro and Blob were surrounded by the Desert Sword, while on the other side of Kuwait City their comrades were in dire straits before meeting their evac chopper. Pyro and Blob fought as hard as they could, succeeding in burning one opponent to death 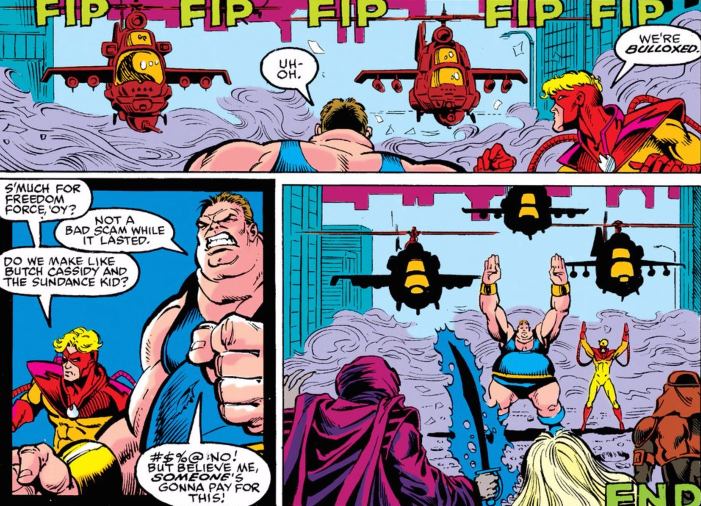 and almost defeating Desert Sword. However, as they called for an evacuation, the pair were surrounded by incoming Iraqi forces. To save the life of the dying Crimson Commando, Avalanche gave the order to abandon his teammates. Severely outnumbered, Pyro and Blob surrendered to the Iraqi military. [New Mutants Annual (1st series) #7, Uncanny X-Men Annual (1st series) #15, X-Factor Annual #6]

Luckily for the pair, they not only avoided execution but convinced the Iraqi military commander to appoint them as body guards. They served for a time in this capacity until their freedom was bartered for by the mutant villain Toad, who was forming his own Brotherhood of Evil Mutants. Eager to return to the States, Pyro and Blob quickly joined. [X-Men Annual (2nd series) #2]

Whether working with Freedom Force or the new Brotherhood, things didn’t change much for Pyro, as he was quickly brought into conflicts with various superheroes, such as X-Force, X-Factor, Darkhawk and Sleepwalker. [X-Force (1st series) #6-7, X-Factor (1st series) #82, Darkhawk (1st series) #19, Sleepwalker #17]