(Click on each image to view a larger version) 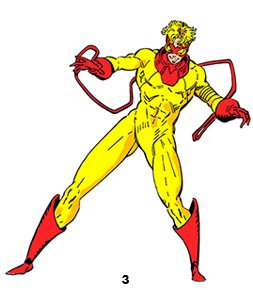 1) Pyro’s most regular costume, first worn when he joined the Brotherhood, consisted of a yellow and orange body suit with a red, high collared, triangular component running from his shoulders to his stomach. A red mask covered most of his face, leaving his hair and mouth uncovered. To provide his flame, he wore a yellow fuel tank on his back connected to wrist-mounted flamethrowers. [X-Men (1st series) #141]

2) While with Freedom Force, Pyro switched to a simple, skintight, red and yellow uniform with “FF” printed on his chest. A flame pattern ran diagonally from his right bicep to his left shoulder with red above and yellow below, along with his boots. Like his previous costumes, his mask left his mouth and hair uncovered. [Uncanny X-Men (1st series) #199]

3) Towards the end of his time with Freedom Force, Pyro sometimes varied the costumes he wore. One costume was similar to the one he wore with the Brotherhood. He stuck to the yellow and red theme with red gloves, boots mask and a solid collar over a yellow full body suit. [New Mutants (1st series) #86] 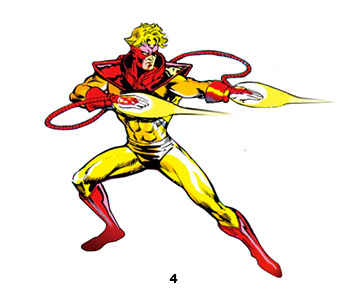 4) Pyro donned another costume on his last mission with Freedom Force. This version was similar to his previous costume, but added large, red shoulder pads and orange coloring to his arms and sides. [New Mutants Annual (1st series) #7]

-) When he return to the Brotherhood, and later when he was dying from the Legacy virus, Pyro often wore various versions of costume #1 and #3.