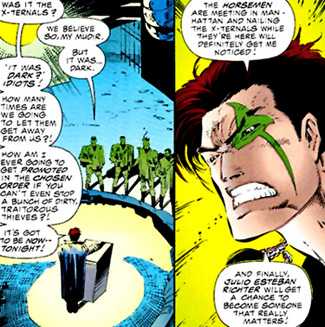 In the Age of Apocalypse, the prelate Rictor was a loyal soldier of Apocalypse and commanded an army of Madri. He had designs on moving up the chain of command and saw the apprehension of the renegade mutant team the Externals, and their leader Gambit, as his ticket to do it. After tracking the Externals to their base, he was ready to finally take them down but things went wrong when he was caught in Lila Cheney’s teleportation field and transported across the galaxy. Rictor and the Externals appeared on another planet and were immediately set upon by the Imperial Guard. Whilst the Externals fled, Rictor struck a deal with Gladiator and aided them in hunting down his enemies. They caught up with the Externals at the M’kraan crystal, where it was destroyed to gain a shard from it. The Externals saved Rictor from the ensuing explosion and returned to Earth. However, Rictor didn’t repay the debt and continued his zealous hunt of Gambit. Unfortunately he was so blinded by his goal that he failed to see the importance of the shard or the fact that they also had Magneto’s son in their midst. After failing to capture Gambit, Rictor returned to Apocalypse where he was interrogated over his actions and subsequently killed for his incompetence. 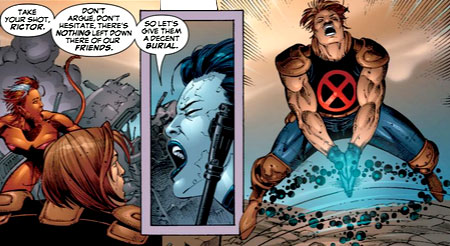 In the future that depicted The End of the X-Men Rictor was once again a member of X-Force. When the X-Men’s villains joined forces and made a grand plan to wipe the mutants off the Earth, X-Force was not exempt. X-Force’s plane was brought down by a missile and the survivors attacked. In the ensuing chaos, a number of his teammates were infected with the Technarx virus and the only thing left to do was for Rictor to quickly bury them using his powers. Whilst he was one of the few survivors of the initial onslaught, he met his end when he was attacked by a Warskrull pretending to be Wolverine. 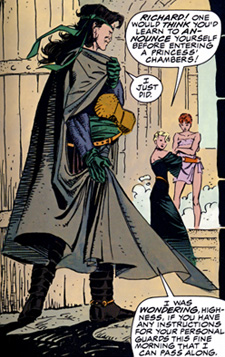 Across the dimensions is a land known as Gesham that is ruled over by an alternate version of Wolfsbane, known as Queen Rain. Amongst her countless knights is a man called Richard who is gifted with a hammer that can emulate earthquakes. Whilst the young knight was brash and egotistical he proved his worth in protecting his queen against a demonic beast, an alternate Wolverine.