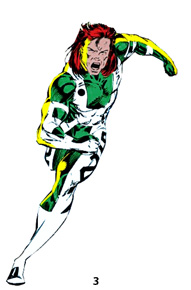 1) When Rictor first joined up with X-Factor, he tended to stick to normal street clothes. Eventually, he adopted a more superheroic look when he had to rescue some of his friends from the Limbo demons. His outfit consisted of a black sleeveless, leather vest, which he often wore unbuttoned. He also wore a pair of blue jeans, black gloves and red shoes. Later on, he took to wearing a red bandana around his head. [X-Terminators #2]

2) When Cable took over the New Mutants, the team adopted matching uniforms but with individual twists. Rictor was initially reluctant to wear one but he eventually opted for a dark green, sleeveless bodysuit which had white paneling on his lower torso and inner thighs. He finished off the look with green gloves, white boots and a bandana. Later on, he added shoulder pads and a brown belt to the ensemble, as well as a white X logo on the chest. [New Mutants (1st series) #93]

3) When he was captured by Cameron Hodge and processed to become a Genoshan mutate, Rictor was given the mutates’ trademark uniform to wear. His version was dark green body suit with white sections on the legs, arms and side of his torso. The numbers 527 were printed on both of his legs as well as his chest. [New Mutants (1st series) #95]

4) As a member of Weapon Prime, Rictor’s costume reflected his earlier street-style look. It consisted of a black tank top and jeans which were often ripped in various places. On top of that, he wore a green neckerchief, bandana, knee pads and a large shoulder pad over his right shoulder. As well as that, he had black fingerless gloves, knee-high boots and a silver belt. [X-Force (1st series) #11] 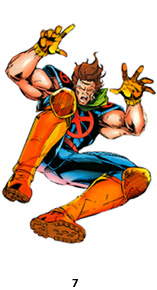 - When X-Force were taken prisoner by the X-Men, Rictor was made to wear the X-Men’s standard yellow and blue training uniform. Once he was released, he went back to wearing his own costume.

5) After Cable was seemingly killed, X-Force decided to continue function as a team without him. Rictor adopted a slightly more superheroic look from his previous costume. He wore a black and blue sleeveless bodysuit with a large red X adorned in the center of the chest. On the front of the legs were large blue patches that had a crisscross pattern of black lines. The suit was trimmed with yellow and he also wore a belt, neckerchief and gloves. Additionally, he wore a pair of brown knee-high boots and large shoulder pads. [X-Force (1st series) #19]

6) Rictor toned down his look a short while later. Sticking to the black, sleeveless bodysuit he now wore a green sleeveless jacket over the top. He kept the accessories to a minimum with just black boots, gloves and some silver metallic bracelets. [X-Force (1st series) #39]

7) When Rictor returned to X-Force after spending some time at home, he wore a costume that matched their uniform look but with his signature twist. It consisted of a dark purple/blue sleeveless bodysuit with a large red X on the chest and a black crisscross pattern on the legs. He also wore large yellow shoulder pads, gloves, a belt and knee-high boots all adorned with the red X logo. He finished it all off with his trademark green neckerchief. [X-Force (1st series) #59]

8) When Rictor was breaking up the gun cartels in Mexico, he wore a dark green bodysuit with a brown jacket over the top. He accompanied it with a red belt, kneepads and bracelets, as well as the usual green neckerchief. [X-Force Annual '99]

-) As part of the X-Corporation, Rictor wore the standard black padded jeans with a black jacket on top. The jacket had a large yellow X that covered the entire torso front and back. He also wore black boots and fingerless gloves.

9) When he joined X-Factor Investigations Rictor adopted the general street-level superhero theme the team had. He tended to wear a light colored fleece with a pair of dark jeans. The fleece had small dark shoulder pads that ran down the sleeves stitched on as well as an X-logo over the left side of the chest. Over the top, he wore a knee-length brown trench coat as well as a pair of trainers. [X-Factor (3rd series) #1]

10) Soon after, Rictor modified this look and he wore a white sleeveless vest with a pair of blue jeans and trainers. Over the top, he wore a black jacket which had red strips down the arms. For a short while, he tended to switch between this look and the previous one. [X-Factor (3rd series) #13]

11) Later on, he changed his look again and opted for a red t-shirt with a brown and white jacket over the top. He wore his usual gloves, jeans and trainers as well as the team’s signature belt and X-buckle. [X-Factor (1st series) #200]