Julio Esteban Richter was born in Guadalajara, Mexico into a family ruled by their criminal ways. When his mother died and his father remarried, Julio came to look up to his step-mother as if she was his real mom. His father, Louis, was a crime lord who had his hands in many illegal activities such as gun trafficking. Whilst Julio grew up in an ignorant, luxurious bliss thanks to the family’s blood money, it wasn’t long before he realized exactly where it came from. His father would take him on deals and on one such assignment they were locked up in a makeshift jail. When they were eventually freed, a somber Julio was shocked to see his father sell a crate of guns to a group of men. 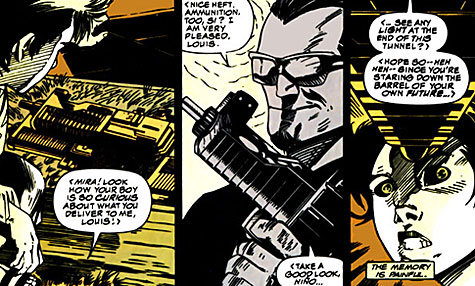 When Julio was six, he was at home with his cousin when a man stormed the family’s compound, looking for his father. He could only watch from a window as the man defeated the group of bodyguards and shrugged off their bullets. Louis had apparently struck a deal with the man and then gone back on it when the police started getting interested. The man, whom Julio nicknamed the Shark, murdered his father before his eyes. Ever since that day, Julio vowed to have nothing more to do with the family’s activities. [X-Force (1st series) #34]

Years later when Julio was a teenager, his earthquake-inducing mutant powers began to manifest. Scared as to what was happening to him and fearful of getting drawn into his family’s criminal ways, he ran away from home. Rictor became a soldier for a time, forced into using the same weapons his family sold. He was soon captured by the anti-mutant group known as the Right when he accidentally unleashed his powers in a city and destroyed many buildings. They gave him the codename Rictor and strapped him into a machine that harnessed his powers. They then tortured him until his powers activated and left him to destroy San Francisco. 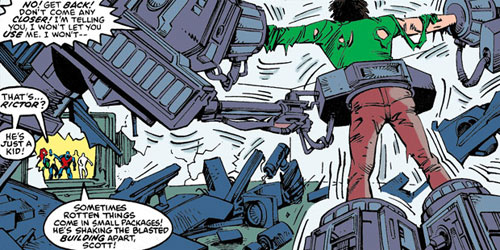 The original team of X-Men, going by the name X-Factor, was alerted to the situation but they were under the assumption that Rictor was willingly attacking the city. After realizing that he was just a young pawn in the Right’s plan, they freed him from the machine. Unfortunately, he could not stop shaking and so Jean Grey had to stop his heart for a second to prevent him inadvertently killing them. Thankfully, he survived and he was taken back to the team’s base to recover. [X-Factor (1st series) #17]

Rictor soon met up with some other mutant kids whom X-Factor had saved. He began training in the use of his powers but, during his first session, he lost concentration when Cameron Hodge walked in the room. He recognized Hodge’s cold voice as being very similar to the unseen leader of the Right. Soon enough, it was discovered that Hodge had been manipulating X-Factor and was actually using them in his bid to turn public opinion against mutants. [X-Factor (1st series) #18]

Whilst Rictor was enjoying having a roof over his head, he was struggling to come to terms with X-Factor’s role in mutant affairs. Their public profile was as a human-comprised, anti-mutant group that hunted down problem mutants. However, really that was just a guise for X-Factor, who would actually save the mutant and take them somewhere safe, just like how they had done with Rictor. 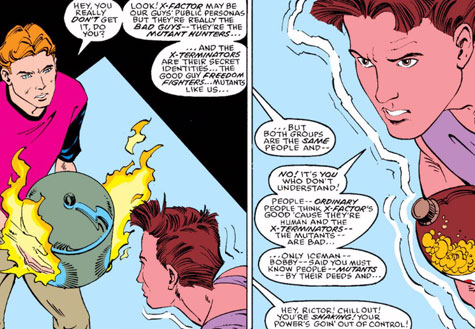 After watching a televised fight in Central Park between the team and the forces of Apocalypse, Ric was struggling to see X-Factor as the good guys, given how much destruction they caused. Believing that all mutants were dangerous, himself included, he got into a fight with Rusty Collins, a fellow young trainee. However, when Rusty was later attacked in the park while trying to fix the damage from the fight, Rictor came to his rescue by finally taking control of his powers. Seeing that he wasn’t a slave to his powers, Rictor began to realize that mutants could do some good in the world. [X-Factor (1st series) #20]

The Right, the organization that had previously captured Rictor, was moving forward in its plans to take down X-Factor. As well as attacking them in public, they also sent a squad of armed men to capture the young X-Factor trainees. Seeing the armored men charge through the team’s complex, Rictor was terrified that he was going to be tortured and drugged like before. Deciding that he would rather die than be captured, Rictor tried to bring the whole building down on everyone, but was stopped by Leech who nullified his powers. The youngsters were captured and had power-inhibiting helmets placed on them, after which they were taken back to the Right’s base to be tortured and interrogated. Thankfully Boom Boom, another ward of X-Factor, had evaded captured and freed Rictor. The young man was still convinced that death would be preferable than being forced to use his powers to hurt people. It came to a head when the two youngsters were faced with either capture or falling to their deaths. Rictor was ready to let them fall but Boom Boom managed to convince him to hold on and hope for X-Factor to find them. 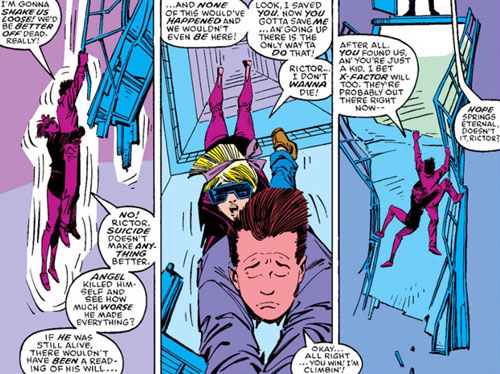 Boom Boom’s faith was rewarded as the older mutants did indeed find out where their wards were being held and enacted a daring rescue. By now, Cameron Hodge had revealed himself to be in charge of the Right and saw over the young mutants personally. When X-Factor stormed the compound, they cut the power which enabled the kids to break free of their restraints. Rictor showed off his gunmanship to the rest of his teammates by using the weapons he hated so much to destroy the torture devices that held them. A battle ensued which ended with X-Factor and the kids escaping from the compound as it exploded in a huge fireball. [X-Factor (1st series) #21-23]

Rictor and the other kids stayed with X-Factor for a while but soon Cyclops and Jean Grey decided that it would be more beneficial for them to go to school with humans. Naturally, the kids were against this plan but they didn’t have much of a choice. [X-Factor (1st series) #32-33]

The kids were split up, with some of them going to a school for children with learning disabilities and the others, like Rictor, going to an elite prep school. Things went very wrong very quickly when Artie and Leech were kidnapped from their beds by Limbo demons. Thankfully, one of their classmates alerted everyone to the situation and so Rictor and the team set out to rescue them, taking on the team name the X-Terminators. Artie was able to project an image to the team to tell them that they were being held captive in a local mausoleum. 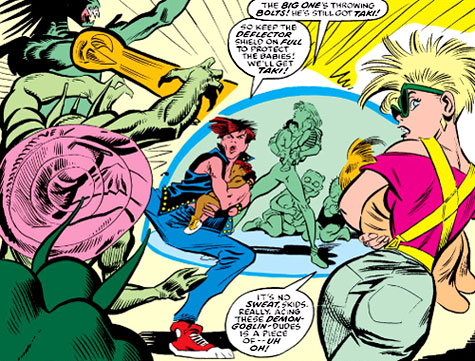 The group made their way across the city, which was slowly twisting to the influence of the Goblin Queen and the Limbo dimension. After fighting through hoards of demons, the team found the two kids as well as numerous other infants. They realized that the infants were going to be sacrificed by the demon lord N’astirh, so they decided to stop him. Unfortunately, despite their valiant effort, the X-Terminators were captured and taken back to the surface to watch as New York was turned into a demonic version of itself. They eventually broke free and, with the help of the New Mutants, managed to disrupt the demonic spell and save all the infants. As the demon war raged on, Rictor, along with some of the New Mutants, took a brief trip into Limbo itself, thanks to Illyana Rasputin aka Magik. [X-Terminators #1-4, Inferno Crossover]

After the demon takeover of New York was thwarted, Rictor and the other X-Terminators decided to leave their schools and return back to X-Factor’s ship. Whilst the X-Factor team was away on business, the youngsters decided to have some fun and go diving. Along the way, they found a mysterious horn, which Rictor promptly blew and thus unwittingly unleashed an ancient sea creature. Thankfully, the team’s new friends from the New Mutants showed up to help them. After the creature was banished back to where it came from, the two teams decided that they made such good allies that they permanently joined forces. The remaining X-Terminators were absorbed into the New Mutants and the new team set up base on X-Factor’s ship. [X-Factor (1st series) #40, New Mutants (1st series) #76]

When Rictor’s teammate, Moonstar, was possessed by an unknown force, they ended up coming into conflict with Freedom Force, led by Mystique. Rictor was injured when one of the government-sponsored mutants shot him in the head. He recovered just in time to use his powers to knock their helicopter out of the sky to stop them following them. The New Mutants were then whisked away to Asgard, where the source of Moonstar’s Valkyrie powers lay. Rictor took it all in stride but Boom Boom struggled to deal with all the things that the team had been through recently. 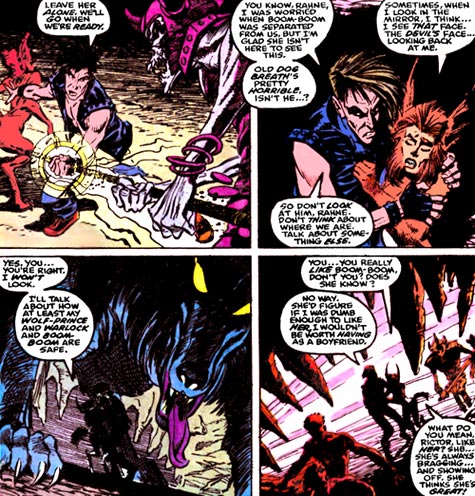 He vowed he would be there for her, just like she had been there for him when he was ready to end it all many months before. He proved to be just as good friend to Wolfsbane, who was troubled by the giant she-wolf Garm that guarded the realm of Hel. He managed to calm her down enough so she could pass by her without collapsing in fear. Rictor admitted to Wolfsbane that he had become attracted to Boom Boom but explained that he dare not tell her, as she wouldn’t be interested in him.

The team was split up as they dealt with the forces of Hela, who was making a bid to kill Odin and take over Asgard. Rictor and a few others were captured by Hela and bound in magical chains, but thanks to his powers he managed to vibrate the shackles loose and free the rest of his team. Rictor’s powers proved invaluable in the subsequent battle with Hela and her army. Eventually, the Goddess of Death was defeated and she reluctantly returned to her own realm, vowing revenge on the New Mutants. [New Mutants (1st series) #77-80, 82-86] 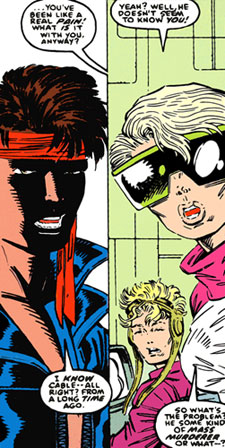 The team traveled back to Earth, reconnected with X-Factor and told them about their adventures. In their time on Asgard, Rictor and Wolfsbane had grown closer and the bond continued to grow once they were back. This had not gone unnoticed by Boom Boom, who decided to wear some provocative clothing to get Rictor’s attention again, but the plan failed to work. When Wolfsbane was summoned back to Scotland, Rictor was distraught at the prospect of losing her, just as he was getting to know her. When Moira MacTaggert arrived to pick Wolfsbane up, Rictor decided to trust Rahne's intuition that something was up with Moira. Moved to desperation, He used his powers to seemingly smash apart her helicopter to delay her leaving so that some of the X-Factor team could talk to her. The plan worked, although it wasn’t any X-Factor members who convinced Moira but rather a mysterious new arrival called Cable. Rictor should have been pleased that Wolfsbane could stay but he was more concerned by the fact that he recognized Cable and not in a positive way. [New Mutants (1st series) #87-89]