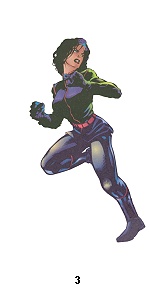 1) During the brief time Xavier trained her to be his spy, Tessa wore the standard black and gold school uniform that the original X-Men were wearing too. [X-Treme X-Men (1st series) #9]

2) As Sebastian Shaw’s assistant at the Hellfire Club, Sage dressed in the typical skimpy clothing the women associated with the Club wore. While her outfits varied, she predominantly wore black panties, a corset and laced-up high-heeled boots, often with gloves and stockings. Typical of her outfits were also a slave collar and bracelets. [X-Men (1st series) #133]

3) Reunited with Sebastian Shaw after believing him dead for long months, Tessa wore a sleek deep blue/purple military style uniform, trimmed with some red lines. Shaw wore a matching outfit, making it seem like they were equal partners, even though that was not the case. [X-Force (1st series) #49]

-) Later on, after Shaw had stopped working with the Hellfire Club’s Inner Circle, Tessa wore a number of different outfits. While they covered more skin than the standard Hellfire Club uniform she had worn for so long, still each of these costumes was black and skin-tight. [X-51: The Machine Man #0, 7] This theme was continued in her various outfits as mansion staff for the X-Men. [X-Men (2nd series) #103, X-Men Annual 2000] 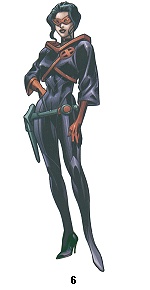 4) When she joined the X-Treme X-Men, Sage, like all of them, wore a predominantly black outfit. In her case, a skintight black leather outfit. The upper part was held together over one shoulder. There were also asymmetrical straps on the lower part. In addition, she wore long, fingerless gloves and a tight belt that displayed a red X on the back. [X-Treme X-Men (1st series) #1]

6) After the team’s return to the mansion Sage adopted a look similar to her first X-Men costume, only this time dark purple, with red gloves rather than black. In addition, she wears a loose, short hooded purple jacket with a dominant X-symbol. The jacket’s inside is laced with circuitry. [Uncanny X-Men (1st series) #444] 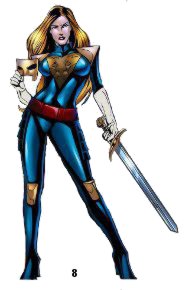 7) As a member of Excalibur, Sage wore a black leather outfit. Her leggings were covered by a short skirt combined with a long-sleeved crop top baring her midriff. Her boots, sleeves and the rest of her outfit were trimmed with purple lines. She also wore a purple belt, handgun at her side, and a new version of her cyber-glasses. [New Excalibur #2]

8) As Diana Fox (Britannia), Sage let her hair down and dyed it blonde. Her Shadow-Captain uniform was a variation on Albion and the Captain Britain Corps. The blue bodysuit had golden epaulets and kneepads, with a golden lion symbol on her chest. She also wore white gloves, a red belt and a golden mask. [New Excalibur #21]

9) As a figment of Sage's imagination, Diana's look changed. It was a deep blue-black color body suit with a red trim around her exposed neck and chest. Her left arm was sleeveless, but both arms were covered in metallic coverings, as well as metallic boots. Her red belt had a golden buckle. [New Exiles #1] 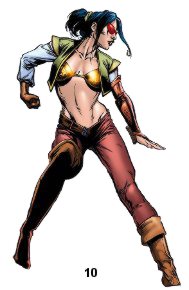 10) On a world of knights and dragons with the Exiles, Sage scavenged a new costume. This look included brown leather pants with different length boots, a golden brassiere, and a tiny green jacket with mismatched white and brown sleeves. [New Exiles #5]

11) After merging with the Crystal Palace, Sage assumed a new attire partly based on some of her previous appearances. She kept the brown pants with boots of two different lengths from her last look. Long fingerless black gloves and a black top with gold ridging on the sides resembled her X-Treme costume. She also wore a collar and a trench coat with a high collared fur trim. [New Exiles #18]

12) Upon joining the extra-dimensional SWORD, Sage adopted a look remeniscent of her original X-Treme X-Men costume, with a one-shouldered black leather body suit. The suit was highlighted by red lines and marking along her arms, legs, and torso. In place of her previous "cyber-glasses", Sage wore a plate of futuristic glass over one eye. [X-Treme X-Men (2nd series) #6]

13) On Krakoa, Sage often wears a slight variation of her first X-Treme X-Men costume, along with the cyber-tech glasses from that time period. She wears a short yellow jacket over it and yellow gloves. [House of X #1]