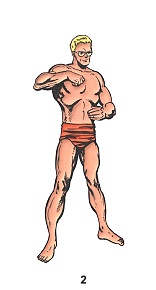 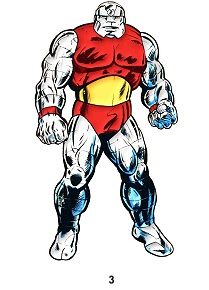 2) While his teammates all received individual costumes, Walter would generally strip down from whatever civilian clothing he was wearing to change into his Sasquatch form. However, when he transformed back, his orange briefs would always be in place, hinting at them being made from unstable molecules. [Alpha Flight (1st series) #1]

3) Though he would only inhabit the armor for a short time, Walter’s soul called the Box armor home when he was without a body. [Alpha Flight (1st series) #24] 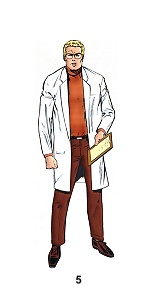 4) Following his resurrection, Walter returned as a woman, dubbing himself Wanda Langkowski. Wanda had long white hair and, unlike Walter, did not require glasses (this is probably due to Snowbird having had perfect eyesight). Wanda generally wore tight fitting spandex when she wasn’t transformed into Sasquatch. [Alpha Flight (1st series) #45]

5) Shortly after being transformed back into a man, Walter apparently had most, if not all of his civilian clothes be made of unstable molecules. The clothes would disappear during the transformation, allowing Walter to change into Sasquatch without having to strip down first, and to appear fully dressed again whenever he transformed back into his human appearance. [Alpha Flight (1st series) #69] Walter usually wears comfortable yet smart clothing, sometimes accompanied by a lab coat.

6) When Alpha Flight donned team uniforms for the first time, Walt also began wearing one when he was not transformed into Sasquatch. The uniforms were red and white tight-fitting spandex with a Mapleleaf design on them. [Alpha Flight (1st series) #104] The team costumes didn’t last for long, though, and Walter soon returned to wearing just his civilian clothing, when not transformed into his furry alter ego.

-) When several members of Alpha Flight went up against the Juggernaut, they all wore new “Hulkbuster” type armor, for in a previous battle with him, they lost badly. This unflattering armor covered the lower part of Sasquatch's body in spandex, while the top part resembled Juggernaut's shape of armor, except for two massive adornments on the shoulders. [Uncanny X-Men (1st series) #432-434]