How does a mere mortal even begin to comprehend the life of a woman who has not only seen empires rise and fall but has probably had a hand in their fate? Where does one begin to untangle the fact from fiction? In a world where myth and reality often walk hand in hand, it can be difficult to know where to start. To truly understand Selene, one must travel back past the birth of Apocalypse and past the fall of Rome, to a time when humanity was only just coming out of the shadows.

The mutant known as Selene was born some 17,000 years ago, somewhere in central Europe. Whilst her father is unknown, her mother was said to be a child herself and part of one of the many tribes that roamed the area. Selene’s vampiric ability to drain the life-force of another being became obvious from the start, when she killed her mother whilst still an infant. Not knowing what 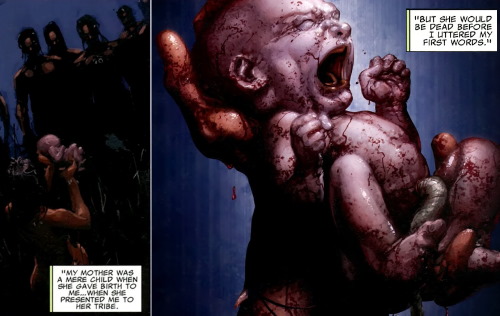 a mutant was, the tribal elders knew Selene was something different and, rather than fear her, they ensured her survival by offering themselves up. Named after the goddess of the Moon, Selene drained the life of her entire tribe one by one until she was the only one who remained. Records of Selene after this point are all but non-existent and, with thousands of years unaccounted for, it makes one wonder what she did with her time. As well as being a mutant, Selene is also a powerful sorceress, a skill that she must have learned during this period. It could be why she apparently came into conflict with another sorcerer, Kulan Gath, but the details of their clash have never been revealed. [X-Necrosha #1, Uncanny X-Men (1st series) #190]

In the thousands of years that passed, the tales of Selene the mutant and Selene the goddess became intertwined. Perhaps they were always one and the same but, over time, Selene came to 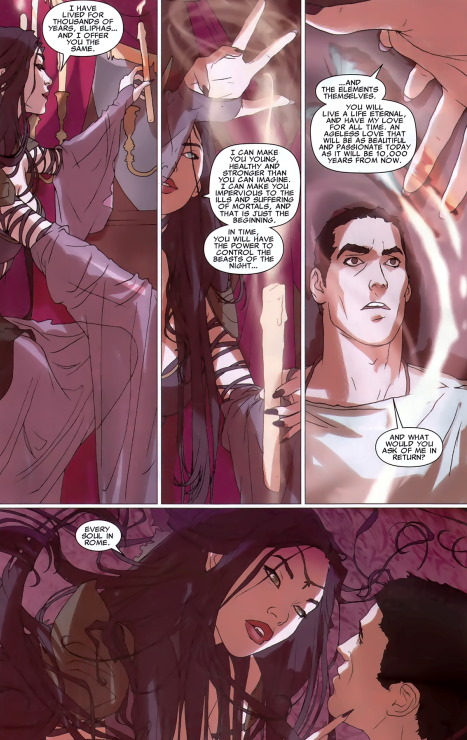 believe she deserved to become an actual goddess. Due to her mutant abilities, she remained as beautiful and youthful as she did millennia before. She discovered a ritual that would allow her to ascend to her rightful place, but she needed help to do it. As time passed, the human world advanced and great empires covered Europe and the Middle East. The biggest of these belonged to the Romans, a society that Selene greatly admired and whose way of life would impact her long after its fall. She travelled to Rome itself and found a man called Eliphas, a former soldier who had become a respected senator. Selene waited until Eliphas’ life and social standing in Rome was crumbling around him before she approached him, offering him a deal. Entrancing the desperate man with her beauty and power, she claimed to have been waiting for him for thousands of years. Whether it was true or not may never be known, but Eliphas listened as she promised him eternal life as well as her ever-lasting love. All she wanted him to do was sacrifice every soul in Rome. Eliphas declined her offer, not wanting to commit such a grave crime and Selene left him alone, knowing it would only be a matter of time before he saw things differently.

Sure enough, when Eliphas returned home he discovered he had lost his senate position and his wife had abandoned him. Selene was there to comfort Eliphas, who accepted her offer and prepared to sacrifice all of Rome in revenge. She handed him a blade forged out of the bones of her mother and gave him the instructions to complete the ritual. Her faith had been misplaced, however, as Eliphas had warned someone about the ritual and they in turn had told the authorities. As Selene was about to cast her spell, she was attacked and a sword was thrust through her head, disabling her long enough for her to be captured. When she woke up, she found herself tied to a stake alongside Eliphas, with a group of soldiers ready to burn her. 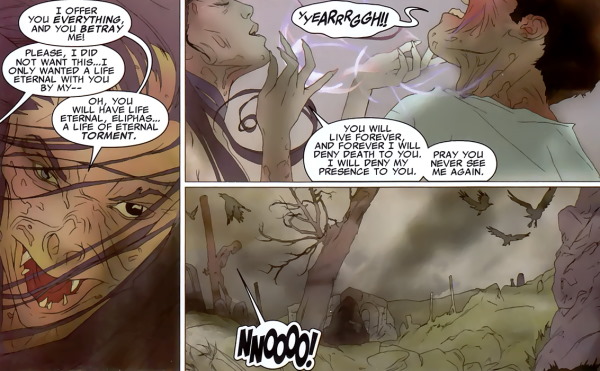 The physical attack had forced her body to show the true ravages of her age and she now looked more demonic than the ethereal beauty she previously portrayed. She used her magic to burn the soldiers and turned her attention to the traitorous Eliphas instead. The man had denied her the godhood she longed for and so she cursed him to live an eternal life of torment. She threatened him to never grace her presence again or he would see what cruelty she could truly be capable of. [X-Force (3rd series) #11]

After her bitter defeat, Selene retreated once more but she declined to give up the relative comfort of Roman society. Cracks had started to appear in the Roman Empire, and a group of influential Romans saw the end coming. Selene capitalized on their fears and convinced them to journey with her to what is now South America, where a new colony would be set up. Deep in the Amazon jungle, the secret city of Nova Roma was created and Selene happily lived there for another few thousand years.

[Note: One may wonder how Selene’s longevity was not noticed over the centuries, but a clue to this mystery could be found nearby. It wasn’t just the Romans and their descendants who lived in Nova Roma, an uneasy alliance with the nearby indigenous tribes was forged and many of them also lived in the city. Selene was referred to as an “Inca” by those closest to her, insinuating that they thought she came from one of the tribes outside the city. Selene could effectively grow old and “die,” only to return to the city as a youthful young woman and no one would be any the wiser] 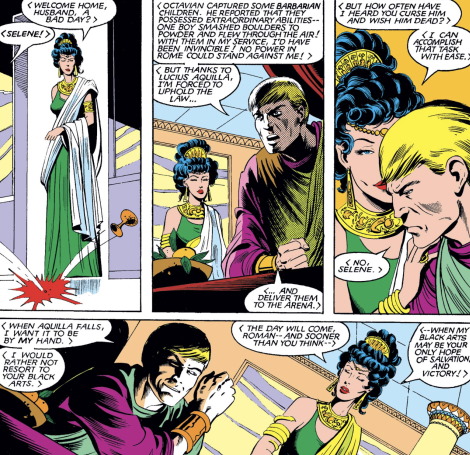 For Selene to maintain her youthful looks, she needed to drain the life-forces of Nova Roma’s citizens. To this end she set up the Cult of Fire, a group of followers who knew Selene’s secret and helped to sacrifice unwilling souls to their mistress. Every generation, Selene would select a victim and wait until the time was right before casting them into a pit of lava, absorbing their life energy as they perished. By the time the twentieth century arrived, the outside world had changed remarkably, and the mutant race had grown in number. Selene herself had married the wealthy Senator Marcus Gallio, a powerful man who had high ambitions to become Nova Roma’s Emperor. He knew to some degree about Selene’s true nature, having both admiration and fear for the power she wielded. One day, the city was discovered by the New Mutants, a group of mutant children with remarkable powers. For the first time, Selene realized there were others in the world like her and she prepared to make another sacrifice to boost her youthful vigor.

Selene came into conflict with the New Mutants when she captured their new friend, Amara Aquila, daughter of her husband’s political rival, Senator Lucius Aquila. Selene had already been responsible for the death of Amara’s mother and now wanted to take Amara’s life as well, while at the same time intending to make Danielle Moonstar, the first other mutant she was aware of her apprentice. Selene threatened to make the girl a life-force energy vampire like herself as well.

The scheme failed, as her attempt to murder Amara actually served to ignite the girl’s latent mutant power over molten rock. Amara and the other New Mutants fought Selene, seemingly killing her, by throwing her into her own lava pit and then burying her under an avalanche. To the New Mutants, Selene had been killed but a being as powerful as she could not be disposed of so easily. [New Mutants (1st series) #9-11]