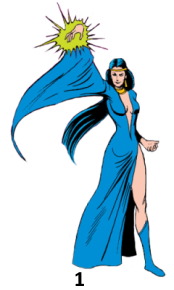 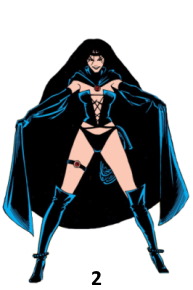 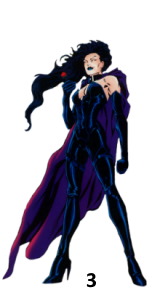 1) Living in Nova Roma, Selene wore the traditional toga adorned with jewelry, which reflected her status amongst the primitive culture. When she prepared to sacrifice Magma, Selene dropped her façade and wore a revealing dress that had large, flared sleeves on. She continued to wear her ornate necklace and earrings, as well as a tiara. After moving to America, she wore a slight variation of this look. [New Mutants (1st series) #10]

2) As part of the Hellfire Club, Selene’s outfits became more… daring. Wearing a black corset, thong and a cape, she complimented the look with thigh-high boots, long-sleeved gloves, a head band and garter. She would make minor alterations to this look over time but the general components stayed the same. [Uncanny X-Men (1st series) #189]

3) Over time, Selene would change the look slightly when she opted to wear a black bodysuit that 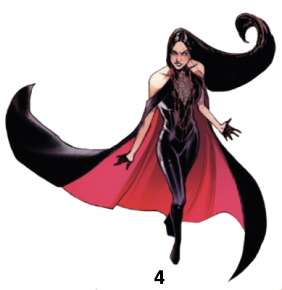 was styled like a corset at the top. She still wore a cape, long-sleeve gloves and boots though. [X-Man #7]

-) In the subsequent years, she would mix and match between her second and third looks, sometimes wearing one or the other, or simply combining aspects of each.

4) When she joined the the rest of the mutant race on Krakoa, Selene kept aspects of her previous looks such as the black bodysuit and gloves. She now complimented her look by adding ornate jewellery and necklaces, as well as coloring the inside of her cape blood-red. [Immortal X-Men #1]