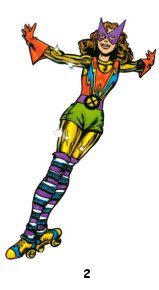 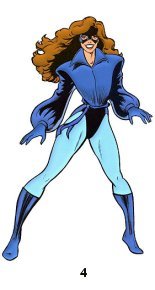 1) When Kitty first joined the school, she was given the standard X-Men training uniform worn by the original X-Men when they were still inexperienced in the use of their powers. [Uncanny X-Men (1st series) #139]

2) After seeing her perform in concert, Kitty designed a costume for herself modeled after Dazzler’s. Much to the X-Men’s amusement, Kitty wore a golden skintight suit, a colorful top, green shorts and bright red gloves, along with a pair of roller skates and striped leg warmers. [Uncanny X-Men (1st series) #149] Professor Xavier was not happy with this design and reminded Kitty that one had to earn the right for an individual costume, so she returned to wearing the standard uniform.

3) When the X-Men returned from space, Xavier wanted to place Kitty in the New Mutants. Only after she proved herself capable of handling herself was she allowed to stay among the X-Men. She had also earned the right to an individual costume. [Uncanny X-Men (1st series) #168-169] The green and yellow outfit presented here is the first of several that she briefly tried out during this phase.

4) After encountering Ogun in Japan and receiving ninja training, Kitty returned to the X-Men with a new codename, Shadowcat and finally settled on a permanent look. She wore a variety of dark blue costumes that included a jacket-like top with billowy sleeves, blue gloves and boots and a face mask. This motif evolved into the costume that Kitty wore as a member of Excalibur and became her most enduring look. [Uncanny X-Men (1st series) #193] 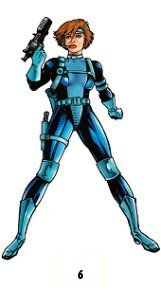 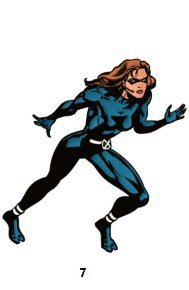 5) After some time together, the other members of Excalibur adopted new costumes and Kitty decided it was time for her to try a new look. This outfit was a modernized version of the classic blue and gold X-Men uniform but contained several pockets and accessories filled with gadgets and weapons. [Excalibur (1st series) #71]

6) When Ogun returned as a ghost inside the computer files of SHIELD, Kitty was temporarily given intern status and asked to help with the situation. As an agent of SHIELD, she wore their standard outfit in her signature colors. [Kitty Pryde: Agent of SHIELD #1-3] When she returned to Excalibur, she returned to her previous costume.

7) After Shadowcat broke up with her lover, Pete Wisdom, she adopted a more aggressive mood and a new, dark and simplistic costume. This simple dark blue bodysuit with a few white accents proved short-lived. The purpose of the added cat-feet was never explained. [Excalibur (1st series) #122]

-) Returning to the X-Men after Excalibur disbanded, Kitty returned to wearing her blue and yellow outfit, though without the massive shoulder pads. Truth be told, this resulted in a look very similar to the standard X-uniform. [Excalibur (1st series) #122] 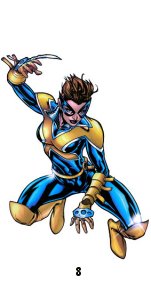 8) A few months later, the X-Men decided on a new team look, all wearing large, stylized Xs across their chests. Kitty’s blue and yellow costume included a pointed face mask and one of Wolverine’s bone claws, which she used offensively as a weapon. [X-Men (2nd series) #100]

9) When Kitty retired from heroics and only helped out the X-Men from time to time, she tended to wear her bartender outfit as a uniform. Similar to the X-Treme X-Men uniforms, it consisted of tight, black, leather pants with holes on the sides, a short, sleeveless, form-fitting shirt, long black gloves with bracelets, and practical boots. In addition, she wore either a short or long black leather jacket and dangling earrings. [Mekanix #1]

10) As a member of Cyclops' new squad of X-Men, Kitty wore a team uniform reminiscent of her previous gold and blue outfits. Basically, it was a black bodysuit with a broad yellow-gold strip down the middle that extended over her shoulders, matching gloves, black boots with yellow seams, and an X-belt. [Astonishing X-Men (3nd series) #1]

11) To thwart an attack on Earth by the Breakworld, Kitty bonded herself to a giant bullet aimed at the planet. After months of being phased and merged with the Breakworld bullet, Kitty was freed by Magneto and home at last. However, she was once again stuck in her intangible state. The X-Club devised a containment suit that allows Kitty a degree of tangibility. This suit looks like a form-fitting X-Men spacesuit with the standard X-Men colors, some ribbing along the undersides and a large helmet reminiscent of a fishbowl. [Uncanny X-Men (1st series) #529]