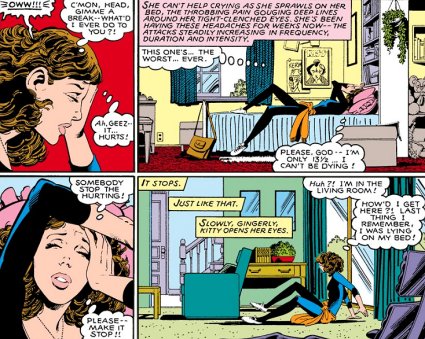 Katherine ”Kitty“ Pryde was a relatively normal 13 ½ year old teenager from Deerfield, Illinois, a suburb of Chicago, whose parents’ marriage was breaking down. Kitty was unusually bright and possessed a genius-level intellect. She was already taking college-level courses despite her young age. It was around this time that Kitty began to have frequent, intense migraines, after which she sometimes woke up in other rooms.

Kitty was unaware of the fact that she was a mutant, however, others were not. Her parents were approached by representatives of two schools: one, Emma Frost, the Hellfire Club’s White Queen, invited Kitty to join her exclusive Massachusetts Academy, the other Professor Xavier – leader of the X-Men – invited Kitty to his School for Gifted Youngsters.  As Xavier discussed 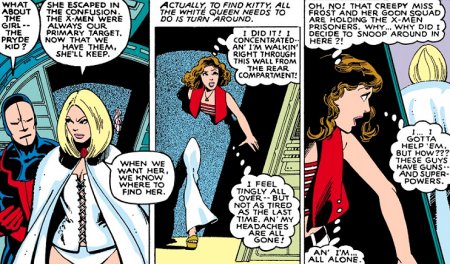 matters with the Prydes, Kitty and Xavier’s students went to the Malte Shoppe. Just as Storm revealed to Kitty who they really were and that she was a mutant as well, they were attacked by Emma Frost’s Mandroids. The X-Men were captured but Kitty escaped by literally moving through the wall outside. Using her newly-discovered ability to phase through objects like a ghost, Kitty secretly followed the Hellfire Club agents and managed to talk with the captured Storm. Storm gave Kitty the phone number of the other X-Men, who had gone to New York to contact another mutant, and asked Kitty to call them for help.

Kitty did so and kept running from the Hellfire Club goons until she was finally rescued by Phoenix and the other half of the team. Together, they freed the other X-Men from the White Queen’s clutches. In the process, Kitty discovered that she could disrupt electronics by phasing through them. The next day, the X-Men returned Kitty to her worried parents. Mr. & Mrs. Pryde

were livid that their daughter had disappeared without explanation. Phoenix telepathically changed the Prydes’ minds, making them forget their daughter's unexplained absence and convincing them that Xavier’s School was the right choice for Kitty. [X-Men (1st series) #129-131]

A short time later, Kitty joined the X-Men. By that time, Phoenix had died, prompting Cyclops to leave the team. In the wake of these events, the X-Men were glad to have a fresh new face in the house. Taking the codename Sprite, Kitty quickly befriended Storm and developed a crush on the shy Colossus. Initially, Kitty was rather frightened of the gruff Wolverine and the demonic-looking 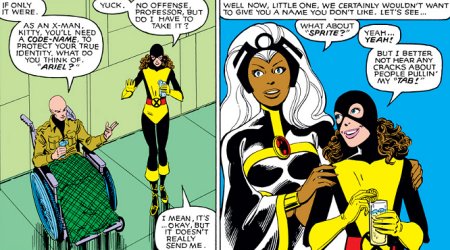 Nightcrawler. Professor Xavier had arranged a surprise for Kitty on the day of her arrival. He had made an appointment for Kitty with a local dance teacher, Stevie Hunter and Kitty promptly started to take regular classes at her studio. Kitty loved dancing and was happy to continue her ballet training in Westchester, as it gave her the opportunity to be with kids her own age. [X-Men (1st series) #139]

After several weeks of preparation, Kitty had her first Danger Room session. Despite the Professor's efforts to create a challenge for his newest X-Man, Sprite excelled at her test, moving through each obstacle untouched. Moments after completing this trial, Kitty suddenly fainted, as 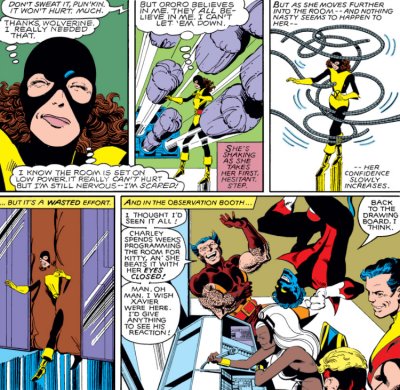 her psyche was exchanged with that of her grown-up self, Kate Pryde-Rasputin. Kate came from a future timeline referred to as the Days of Future Past, where mutants were hunted and killed by Sentinels and the world was on the brink of nuclear war. Kate and her fellow X-Men hoped that their future could be avoided if the X-Men of the present prevented the assassination of Senator Robert Kelly at the hands of the Brotherhood of Evil Mutants, a key event of their timeline. With the help of the X-Men, Kate succeeded in saving Kelly’s life. However, her world did not benefit from this. Upon returning to the future, Kate discovered that it was the past of another timeline that she had altered and not her own. [Uncanny X-Men (1st series) #141-142] 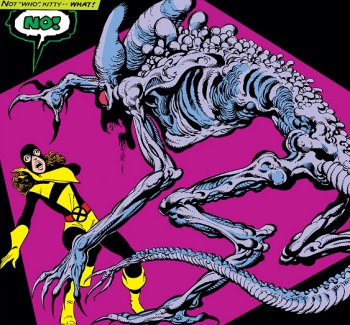 Back in her own body, young Kitty experienced a true trial by fire on Christmas Eve. The X-Men had left her alone on Christmas and gone to Deerfield to fetch Kitty’s parents for a surprise visit. While they were away, the mansion was attacked by a N’Garai demon. To make matters worse, Kitty’s phasing power didn’t work against the supernatural creature. Although she was frightened out of her mind, Kitty didn’t panic but instead used her brains to outwit the monster. She finally managed to kill it using the Blackbird’s afterburners. There was a high cost to this triumph - Kitty's battle with the demon had laid waste to half the mansion in the process. Nevertheless, the X-Men were proud of her. [Uncanny X-Men (1st series) #143]

Sometime later, the female X-Men and some friends attended Dazzler's show at a New York City nightclub. The crowd became hysterical when the deformed mutant Caliban showed up. Kitty was almost kidnapped by Caliban, who wasn’t evil at all but terribly lonely and desperate for company. When Storm invited him to join them at the school, the hideous mutant refused and fled into the sewers. Kitty realized that not all mutants were as lucky as she was, and how badly she had been treating Nightcrawler just because of his appearance. Kitty tried to make it up to Kurt and the two soon became friends. [Uncanny X-Men (1st series) #148] 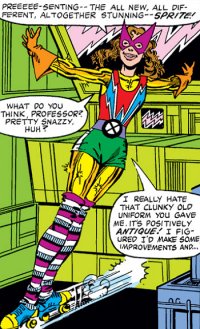 Inspired by the Dazzler’s stage gimmick, Kitty designed a new costume for herself which includeda pair of roller skates. The outfit was outrageous and Professor Xavier informed Kitty that an individual costume had to be earned. He also was angry at her for accidentally erasing some of his data by phasing through the mansion’s computers, further proof that she was not yet a full-fledged X-Man. Despite being only an X-Man in training, Sprite stowed away on a reconnaissance mission to determine what Magneto was up to. The team ended up on Magneto’s new Pacific island HQ, where Magneto was holding the world hostage. Kitty managed to destroy Magneto’s computer systems, angering the Master of Magnetism who attacked her in a fit of rage – nearly killing her. It was this deed that first made Magneto question his actions and attempts to conquer the world in the name of all mutants. Faced with the reality that he had almost killed a child of his own species, he realized that his actions were no better than what the Nazis had done to his people. [Uncanny X-Men (1st series) #149-150]

Kitty soon recovered, but another bombshell dropped - her parents, influenced telepathically by Emma Frost – wanted her to leave Xavier’s and transfer to the White Queen’s Massachusetts Academy. The X-Men unwillingly complied, unaware that this was part of a stratagem by the Hellfire Club to infiltrate and destroy the X-Men. As part of this scheme, Emma Frost switched bodies with the unsuspecting Storm. Ororo(in Emma’s body) and Kitty managed to free the X-Men and Kitty was allowed to return to Xavier's. [Uncanny X-Men (1st series) #151-152]