After settling things in Chicago, Kitty returned to the X-Men. Rather than join Storm’s law enforcement group, the “X-Treme Sanctions Executive” (XSE), Kitty joined Cyclops’ group, based at the Xavier Institute. In addition to her duties as an X-Man, Kitty joined the school's senior staff as the computer science teacher and student advisor. 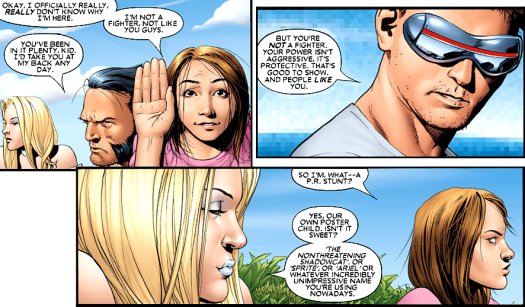 Cyclops wanted her on the team as she was well-liked and non-threatening, which fit his intention to return the team to its “super-hero” roots. However, Emma Frost later admitted that she had personally requested Kitty herself on the belief that Kitty would keep an eye on her. As anticipated given their history, Kitty immediately clashed with the team’s co-leader Emma Frost. This was only the beginning of a strained and antagonistic relationship between the two. [Astonishing X-Men (3rd series) #1-2] 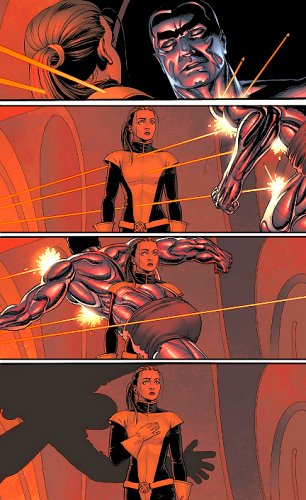 When Benetech Laboratories announced a “cure” for mutants, the X-Men naturally became interested. However, after testing of the cure showed that it was derived from a mutant, the team secretly broke into the heavily armed facility at night to investigate further. While phasing to the lower levels, Kitty discovered an odd metal, which was resistant to her powers. However, when she pressed on, she discovered a secret chamber which, to her astonishment, contained an imprisoned and very much living Colossus. The X-Men learned that the so-called “cure” had been created with the help an alien named Ord, who hailed from a planet called the Breakworld. There was a prophecy that the Breakworld would be destroyed at the hands of a mutant and Ord intended to prevent this prophecy by eliminating mutantkind completely. Kitty’s rescue of Colossus turned the tide against Ord, whose plan was foiled. The production of the cure was ultimately discontinued. [Astonishing X-Men (3rd series) #4-6]

Living at the mansion also allowed Kitty to reconnect with Rachel Summers and the two roomed together for awhile. While overall the X-Men were jubilant at Colossus’ resurrection, for Rachel it was bittersweet. In addition to Colossus, Psylocke had also recently returned from the dead and Rachel could not help but wonder why this could happen for these two but not her own mom, Jean Grey. Kitty reacted badly to Rachel’s selfish reaction and the two friends had an uncharacteristic fight. [Uncanny X-Men (1st series) #460]

At first, Kitty was unsure about her relationship with Colossus, specifically if they would pick up where they had left off. After a few weeks of seeming distance, Colossus made it clear that he still had feelings for her. Emboldened by his words, that night Kitty went to his room and the two finally spent the night together. [Astonishing X-Men (3rd series) #13-14]

The next day the X-Men were attacked by what seemed to be a new iteration of the Hellfire Club, an apparent traitorous Emma among them. Taken by surprise, each of the X-Men were physically defeated or mentally incapacitated... except for Kitty. Inexplicably, years seemed to pass for Kitty. She eventually married Colossus and gave birth to their son, Michael. However, Xavier declared the child a danger and ordered him to be confiscated. Surprisingly, Colossus joined the X-Men to enforce Xavier’s order and Kitty was arrested after trying to protect her child. After eighteen months of imprisonment, Kitty forced Colossus to tell her the location of her child, who was being held in a strange, metal box in the basement. Kitty phased out what she believed to be her son. In actuality, Kitty had retrieved the artificial body/prison of Cassandra Nova, who had inserted a mental program into Emma Frost just prior to her incarceration. Subconsciously carrying out Cassandra’s escape plan, Emma had created an illusory life for Kitty and had set up circumstances for Kitty to free Cassandra.

Luckily, each of the X-Men managed to free themselves from their respective mental prisons and prevent Cassandra’s escape. However, when Kitty snapped out of her trance, she wanted to kill Emma for what the woman had put her through, even though she had done so under the control of Cassandra. However, Kitty was held back by Cyclops. The mental games that Emma played caused Kitty to question her renewed romance with Colossus. His betrayal of her and their son in this scenario was based on her lingering feelings regarding their original break-up. Though she was thrilled that they were together again, she feared that he would abandon her again. [Astonishing X-Men (3rd series) #15-18]

Before these fresh tensions could be resolved, the team was kidnapped by an organization called SWORD - an offshoot of SHIELD dedicated to safeguarding the Earth from extraterrestrial threats. SWORD and its director, Agent Brand, had actually assisted Ord in his work to find a “cure” to mutants, as they feared the Breakworld’s response if they did not. Intending to solve the mess on Breakworld, whose inhabitants had since learned that Colossus was the mutant who was going to destroy their world, SWORD brought the X-Men to Ord’s world instead, hoping to resolve the conflict far from Earth.

On Breakworld Kitty and Colossus were separated from the others and joined the rebel force of a woman named Aghanne. During their time on Breakworld, the two affirmed their affections and their sexual relationship. Kitty had realized that she couldn’t wait for everything in her chaotic life to settle down before seizing what happiness came her way. Eventually, they rejoined the rest of 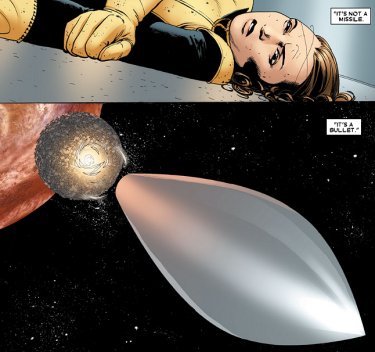 the team and flew to a nearby moon,  where the Breakworlders had a secret weapon aimed at Earth. On the way, Brand told a shocked Kitty that Lockheed had been a spy for SWORD for months.

Finding what seemed to be a single, gigantic missile, Kitty phased inside it to see if she could find some technology she could manipulate or destroy to prevent its launch. However, it seemed to be made of solid metal and the only open area was a chamber in its cone, which was void of any controls. Only after it was fired with Kitty still inside, did the X-Men realize that it was not a missile but a giant bullet aimed at Earth. [Astonishing X-Men (3rd series) #19-24]

Trapped inside, Kitty had found it hard to phase in there as the bullet was made of the same material that had given her trouble when she first faced Ord. In their spacecraft, the X-Men followed the bullet, trying to catch up and get Kitty out. Emma stayed in telepathic contact with Kitty who, thanks to the odd metal, found herself unable to phase out. The situation was grim on Earth too, as the bullet had a type of mental defense mechanism which convinced the Earth-bound heroes they had already acted against it, leaving them in a trance and therefore helpless to actually do anything. 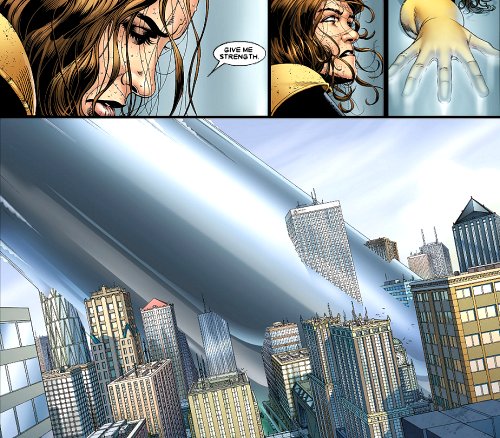 As the bullet was about to hit Earth, Kitty phased it and it passed harmlessly through the planet and flew onward into space. Reed Richards and the other scientists surmised that Kitty had somehow merged with the bullet. Though they concluded that she was alive, they had no idea how to help her. Worse, with every moment that passed, the bullet was getting farther away. [Giant Size Astonishing X-Men #1]

Kitty kept the bullet phased that way for months, saving at least one other world as it journeyed through the cosmos. Though she lived, the X-Men mourned her, fearing that they would never see her again. What they didn’t know was that Magneto, whose powers were recently restored, sensed the alien metal that the bullet was composed of and also who was inside. The Master of 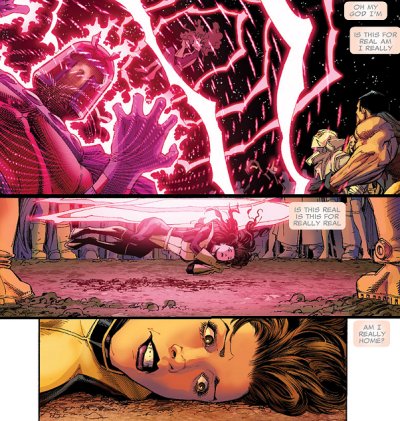 Magnetism committed the energy pattern of the bullet to memory. Many months later, having joined the X-Men and seeking redemption, Magneto began to meditate and concentrate for days without telling anyone his goal. He was attempting to pull the bullet back to Earth in order to free Kitty from it. Though this left him near death, Magneto ultimately succeeded and Kitty was returned. Unfortunately, Kitty and the X-Men found that she was once more stuck in her phased mode like a ghost. The X-Club examined her and found that she had become “stuck” this way because she had used her power for so long. They deduced that Kitty would have to learn how to shift to a solid form again. [Uncanny X-Men (1st series) #522, 526]

As she could not communicate via speech, she and Colossus asked for Emma Frost’s help to enable them to talk with each other. During one such instance, Kitty received some unintended feedback from Emma and learned that Frost had secretly imprisoned Sebastian Shaw and was planning to have him killed. Determined to intervene, Kitty demanded to come along with Emma and Fantomex on their secret mission, to serve as Emma’s conscience. To allow her to leave Utopia, Kitty was given a special containment suit by the X-Club, allowing her to be solid and physically interact. [Uncanny X-Men (1st series) #527-531]