Excalibur went through many membership changes during their time together but Kitty remained a mainstay of the team throughout. A few months after the events of the Inferno, Kitty received disturbing news from the mansion in Westchester. Illyana Rasputin had contracted the Legacy 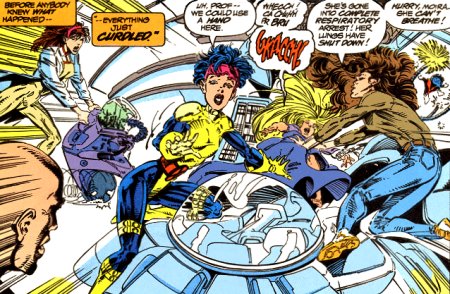 Virus and was in critical condition. Kitty immediately rushed to her best friend’s side and watched over her together with Jubilee. While the X-Men were away on a mission, Illyana passed away. Colossus could not forgive himself that he was not present in his sister’s final hour. When Magneto crashed Illyana’s funeral, Piotr decided to join his Acolytes, as Xavier’s dream had failed him time and again. [Excalibur (1st series) #70, Uncanny X-Men #303-304]

Shortly after Shadowcat’s return, Excalibur (by then consisting only of her, Phoenix and Nightcrawler) relocated to Muir Island to act as an extension of Moira MacTaggert’s research station. With Captain Britain no longer among the team, they felt it was not right to use Braddock Manor as their headquarters anymore. While they were still settling in, Xavier and some of the X- 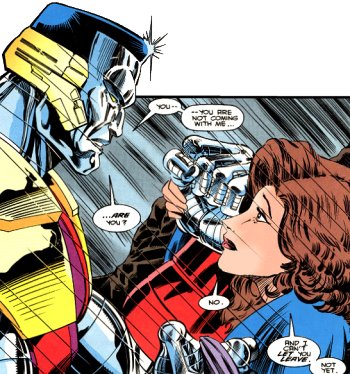 Men visited to ask Kitty for a favor. Refusing to accept that Colossus had left of his own free will, the Professor believed that a head trauma Piotr had received in battle was responsible for his uncharacteristic behavior. Xavier wanted Kitty to contact Colossus and lure him to Muir by pretending that she wanted to join him as one of the Acolytes. At first, Kitty refused but her concern that Piotr might actually be suffering from a head injury was stronger than her loyalties and she did as requested. Colossus came to Muir and by the time he understood that he had been set up, he was already outnumbered and captured by his former teammates. The treatment of his injury and the tests that followed revealed that Peter really had left of his own free will. Kitty felt terrible for betraying her former love’s trust. Colossus returned to the Acolytes, leaving the guilt-ridden Shadowcat behind. [Excalibur (1st series) #71] 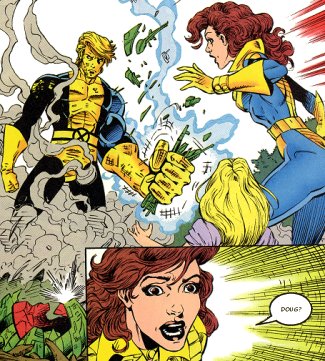 Not much later, Kitty lost yet another friend when Rachel Summers sacrificed herself to enter the timestream, trading places with Captain Britain who had been stuck there. [Excalibur (1st series) #75] Soon, an old friend seemed to re-enter Kitty’s life when during a mission, Excalibur ran into a techno-organic being with the face of Douglas Ramsey. Douglock, as he referred to himself, seemed to be a mix of Doug and his teammate Warlock, though he claimed to be neither.

Kitty’s initial shock soon turned to anger that somebody would make such a mockery of her late friend’s memory. [Excalibur (1st series) #78-79] Over time, she came to accept Douglock as a part of the team and was simply happy to have Doug back, at least partially.

Illyana’s death had consequences, as her Soulsword now became completely bonded to Kitty and began corrupting her. Kitty was drawn into the fight between two sorcerers, Gravemoss and Shrill, who both wanted the Sword for their own reasons. Kitty used her fighting skills to beat them and gave the Soulsword to the sorceress, Amanda Sefton. Amanda separated Kitty from the Sword (and therefore from Illyana’s magic) and gave it to her mother Margali for safekeeping. [Excalibur (1st series) #83-85] 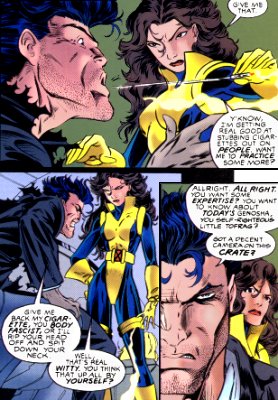 Excalibur was soon approached by the clandestine British Intelligence agency named Black Air, asking for their help on a mission to Genosha. Their liaison was Pete Wisdom, a mutant and Black Air agent who wanted to quit after killing several foes during a previous mission. With his rudeness and his two-packs-a-day cigarette habit, Wisdom did not make friends among Excalibur. He instantly clashed with the outspoken Kitty, whom he considered a “nosy cow.” [Excalibur (1st series) #86-87]

Some time later, Kitty accompanied Wisdom to London, where he was investigating the death of a 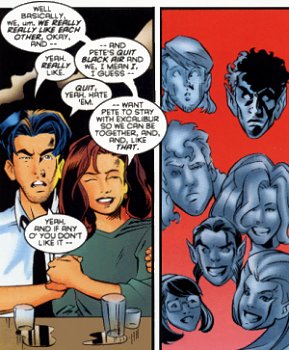 friend. They followed the trail to Black Air, who was amassing exotic weaponry and conducting unspeakable experiments. Working together, the two managed to destroy that particular Black Air installation. In the process, they became quite attracted to each other and quickly fell in love. Wisdom essentially joined Excalibur to be with Kitty. After Brian Braddock and Nightcrawler graphically threatened to do several horrible things to him should he ever hurt Kitty, the rest of the team began to accept him, too. [Excalibur (1st series) #88-91]

Shortly after Wisdom joined the team, Colossus secretly returned to Muir Island. When he saw Pete and Kitty kissing, he went berserk and almost killed Wisdom. The members of Excalibur realized that Piotr was on the verge of a nervous breakdown after the death of his sister and all that had happened to him. They offered to help him after both Kitty and Kurt told him, in no uncertain terms, how badly he had screwed up. [Excalibur (1st series) #92]

By then, Kitty was totally convinced that Douglock was really Doug Ramsey reborn, possibly as a result of being infected with Warlock’s transmode virus shortly before his “death.” Obsessed with finding proof for her theory, Kitty took Douglock and Wolfsbane to Doug’s grave near Westchester and phased underground, expecting to find an empty coffin. Instead, she found Doug’s rotting corpse. Douglock was clearly not Cypher reborn. After this revelation, Kitty slowly began to accept him as an entirely different individual. [Excalibur (1st series) #104-105]

Not long after this, SHIELD offered Kitty an internship. It turned out that they did so because the Helicarrier’s computers, for some unknown reason, accepted Kitty as its only user. Kitty soon learned this was a trap set by Ogun, whose spirit had somehow returned and infected the Helicarrier’s mainframe. With Wolverine's help, Kitty managed to beat the angry spirit. During her time with SHIELD, she met Rigby Fallon, another intern her own age. Kitty and Rigby had great chemistry and were quite attracted to each other. This made her doubt her relationship with Pete Wisdom, which had started to hit some snags. [Kitty Pryde: Agent of SHIELD #1-3]

During an attack by Nightmare, Excalibur became trapped in scenarios resembling their worst fears. Kitty found herself 13 years old again with her parents arguing with each other all day. Nightmare wanted her to believe that, like many other kids of divorced parents, she was destined to grow up too fast and become emotionally handicapped, leading her to repeat the patterns that 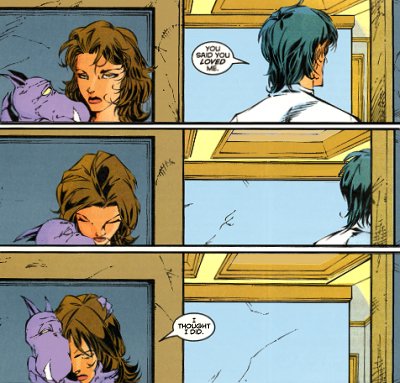 led to her parents strained relationship. After Wisdom managed to  break through the illusion designed for him and Nightmare was thwarted, he and Kitty talked about what happened. She told him about Rigby Fallon and that, although nothing had happened between them, she felt something for him that she did not feel for Wisdom, perhaps because they were the same age. Realizing that their relationship wasn’t working anymore, Pete accepted that it was over and left the team, rather than trying to talk it out with her. The two parted on bad terms. Pete’s last words were “You said you loved me,” to which she had nothing to say. Only after he had left, did Kitty reply “I thought I did.” [Excalibur (1st series) #119-120]