When the Morlocks were attacked and systematically slaughtered by the Marauders, the X-Men

came to their aid. The X-Men had never battled such deadly and relentless foes and took heavy losses. While trying to phase Rogue out of harm’s way, Shadowcat was hit by one of Harpoon’s energy spears, which interacted in an unexpected way with her phasing power. Kitty found that she was locked in her phased form and unable to solidify. [Uncanny X-Men (1st series) #211]

Unfortunately, this condition progressed and Kitty was losing molecular cohesion that would ultimately lead to complete dispersion of her physical form. Her psyche was held together through Psylocke's telepathy. The X-Men turned to Reed Richards of the Fantastic Four for help. Richards had recently been thrown into a state of uncertainty by some stunning revelations  about his past. With his confidence rattled, Mr. Fantastic declined.The X-Men were understandably angry at 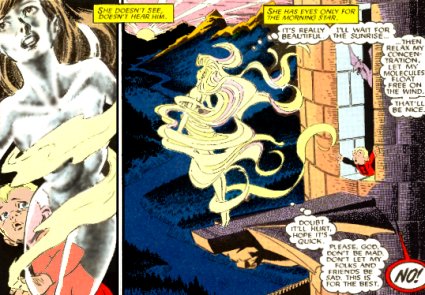 Richards' refusal to help and had no other choice but to reluctantly turn to his arch-rival, Dr. Doom. Doom gleefully accepted the challenge Richards had passed over. Kitty didn’t want the X-Men to be indebted to Doom on her behalf and planned to commit suicide but was stopped at the last moment by Franklin Richards. Franklin’s faith in his father led Mr. Fantastic to reconsider. Observing Doom's plans to save Kitty, reed saw that Doom was about to commit a grave mistake in Kitty’s treatment. Working together, the two geniuses managed to save her. Shadowcat eventually recovered but for a very long time her phased form was her default state and turning solid took immense concentration. [Fantastic Four vs. the X-Men #1-4]

Kitty, along with her fellow X-Man, Nightcrawler relocated to Muir Island to recover from the injuries they sustained in the battle against the Marauders. Shortly after arriving there, Kitty learned of the death of Doug Ramsey and watched the television coverage of the X-Men as they seemingly sacrificed their lives to save the world. Kitty was roused from her depression, when she saw the Phoenix effect one day and was reminding of her missing friend Rachel Summers. She was then visited by Captain Britain’s girlfriend, Meggan, who came to her for help. Captain 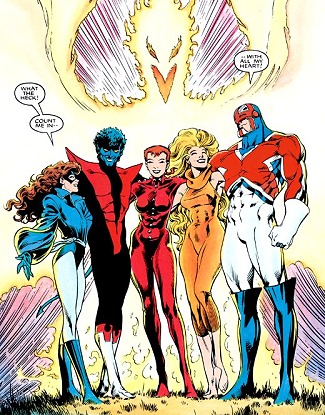 Britain was in a state of severe depression and had began to drink heavily, after the "death" of his twin sister Psylocke, who was among the X-Men who had recently "died". Kitty and Nightcrawler joined Meggan in reaching out to Captain Britain in his time of need. They soon found themselves fighting alongside the reluctant Captain in a battle with several other-dimensional beings – the Technet, agents of the Universal Majestrix Saturnyne, and the Warwolves, sent by Mojo. The two groups had been on the trail of Rachel Summers, who had fled from the Mojoverse. Together with Rachel, the group managed to drive off their foes. Kitty and Kurt were overjoyed to be reunited with their friend. Learning of the X-Men’s deaths, Rachel urged the others to carry on Xavier's dream and try and fill the X-Men's shoes. The five heroes decided to form a new, Britain-based team - Excalibur. [Uncanny X-Men #227, Excalibur: The Sword is drawn] 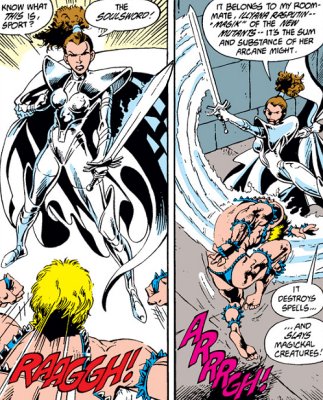 Shortly after the team formed, they were drawn into the Inferno that transformed New York City by a cry for help from Rachel’s baby brother. Most of her teammates were influenced by the demons invading New York and Kitty found herself fighting both Captain Britain and Meggan in their possessed states. In the midst of this, Kitty once again found herself wearing Illyana’s eldritch armor and wielding her Soulsword. With this magical weapon, she could easily restore her teammates. Just as suddenly as they had appeared, both mystical items vanished. After the demonic invasion was over, Kitty learned the reason... and that she had lost another close friend. The New Mutants told Kitty how Magik had nobly sacrificed all her magical might to halt the invasion. As a result, she reverted to the six-year-old girl she was before Belasco corrupted her. [Excalibur (1st series) #6-8]

When Kitty returned to Excalibur's lighthouse, she found Illyana’s Soulsword waiting for her embedded in a stone like the legendary sword of  King Arthur. Though Magik was no more, her 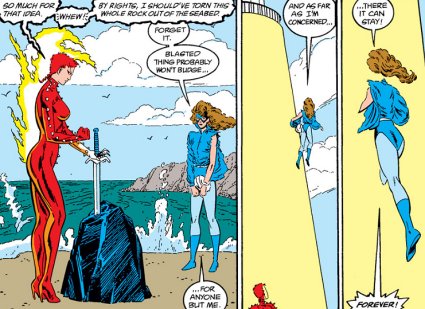 magic had to go somewhere. Kitty did not want the power or the corruption that would come with the sword and chose to leave it there. Rachel tried to get rid of both the weapon and the stone it was stuck in, with no success despite her Phoenix-enhanced telekinesis. Kitty knew that only she could pull the Soulsword from its place, but she did her best to ignore it for the longest time. [Excalibur (1st series) #11]

The appearance of a Nazi version of Excalibur from a parallel reality led to a meeting with Alistair Stuart, chief scientist of W.H.O. (Weird Happenings Organisation). Kitty immediately fell for the man but despite their ability to talk about advanced scientific topics, Alistair ignored Kitty in favor of the gorgeous Rachel – who was not the least bit interested. After Excalibur defeated their counterparts, Kitty was shocked to meet her other self. As a Jew, the alternate Kitty had apparently been sent to a concentration camp, where her head was shaved and the Star of David was tattooed on her forehead. Only the emergence of her mutant abilities saved her from certain death in the gas chambers. Instead, she was forced to serve the “Fatherland.” [Excalibur (1st series) #10-11]

When the Nazi Excalibur was sent back to their own reality, Phoenix accidentally empowered Widget, who teleported the team and Alistair Stuart away. Excalibur became lost between realities, bouncing from parallel world to parallel world,  often facing alternate versions of 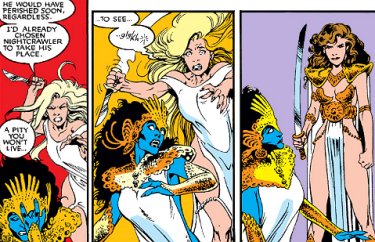 themselves as they looked for a way home. During this Cross-Time Caper, it became noticeable that in several of those worlds, alternate versions of Saturnyne were interested in securing alternate versions of Shadowcat as their heir (one being the Queen Mother of England, who tried to force Kitty into marrying the Crown Prince). In another reality, a barbarian planet reminiscent of Edgar Rice Burroughs’ “John Carter of Mars” novels, Kitty was forced to take a life for the first time. In order to save the life of the noble barbarian princess Kymri, Kitty stabbed the evil tyrant Anjulie who was about to murder her. Kymri later became that world’s Captain Britain. [Excalibur (1st series) #16-17]

Some worlds later, Kitty separated from the others in order to avoid her pet dragon’s fire breath, as little Lockheed was mind-controlled into attacking her.  The only escape was Widget’s warp- 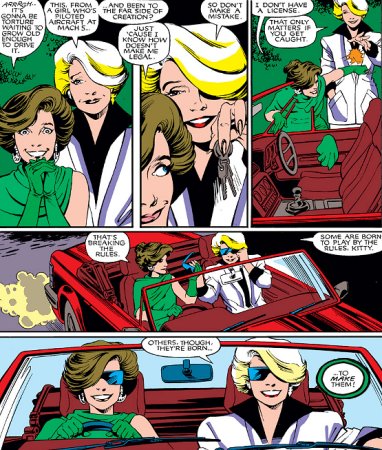 gate which took Kitty straight back to Earth 616 (the Marvel Universe proper). By checking the newspapers, Kitty soon discovered that she had finally wound up in the right reality. She wanted to tell Excalibur about it but Widget’s portal only worked one way and she was stuck,. Excalibur believed she was lost and had no choice but to continue their travels without Shadowcat.

Now all alone in England, Kitty was befriended by the woman she believed to be Captain Britain’s former girlfriend, Courtney Ross. Actually, Courtney had been replaced months earlier by the evil tyrant, Opal Lun Sat-yr-9 (an alternate version of the Majestrix Saturnyne). "Courtney" spent time with Kitty on her birthday and became a mentor figure of sorts. She challenged Kitty to break the rules and defy expectations. [Excalibur (1st series) #19, 24]

Kitty felt that she had lost yet another team of friends and decided to stop super-heroing and attend college instead. “Courtney” tried to help her but despite Kitty having the required qualifications, the university officials feared that since she was educated at a private school, much younger than the others students, and a foreigner, she would lack the necessary social skills and become an outcast. To acclimate her to the British education system,  Kitty had to spend a year (or at least a term) at St. Searle’s school for girls. At first, Kitty was the newbie at 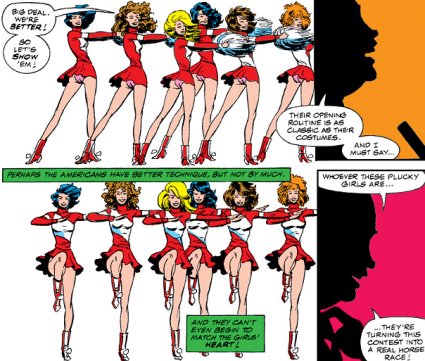 the school and picked on by the other girls. But with her fighting skills, she eventually earned their respect if not their friendship.

When the school was in danger of being closed because it could no longer pay its bills, Kitty joined forces with her rival, Phoebe, and came up with a plan to raise the required money by winning a cheerleader contest. As they performed in the stadium, the recently returned Excalibur was engaged in battle against Mesmero. Kitty abandoned her new friends to help the team, but the inspired girls continued and emerged in second place. Things worked out in the end, as the winning squad needed some training grounds and St. Searle’s leased them parts of their own facilities. Having helped win the day for both St. Searle's and Excalibur, Kitty happily rejoined her fellow mutants. [Excalibur (1st series) #25, 32-34] Though Excalibur eventually recognized Sat-yr-9’s evil, the nature of her plans for Kitty were never made clear.

Some time later, Excalibur learned that the X-Men were alive but Kitty, Rachel and Kurt decided to remain with Excalibur. Having established strong bonds with their new teammates, they agreed that Europe needed a force fighting for Xavier’s dream. [Excalibur (1st series) #41]