During her first adventure in space, Kitty was among the X-Men who were captured by the alien Brood and implanted with the egg of a Brood Queen. At the age of 14, she had to face the certainty that she was going to die a horrible death. At that time, her relationship with her 19-year-old teammate Colossus had become more intense. Kitty even offered herself to him, believing that they were never going to get another chance. Peter told her he also loved her but, always the gentleman, declined, stating that her age did make a difference.

Kitty, like the other X-Men, chose to save the Acanti (whom the Brood had enslaved) rather than

seek vengeance on the Brood. Miraculously, they  were saved and purged of the Brood embryos by the Acanti prophet singer they had freed. While on the homeworld of the Brood, Kitty also met and was saved by a small purple dragon. However, the dragon disappeared during the fighting and Kitty feared that he had perished when the planet was destroyed. [Uncanny X-Men (1st series) #161-166] 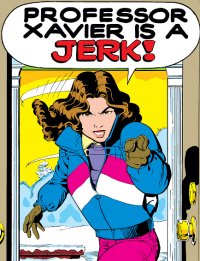 Believing the X-Men were dead, Professor Xavier reluctantly assembled a junior class of trainees, the New Mutants. Having never seen Kitty in action, Xavier demoted her to the new team since many of these newly discovered mutants were closer to her age and some even older. Both Sprite and her fellow X-Men disagreed with Charles' decision believing that she had proven herself. Kitty was livid, sulked and was generally beastly to the “X-Babies” as she condescendingly called the New Mutants. She tried all kinds of strategies to convince Xavier that she was X-Men material. She finally got her chance when the other X-Men were outside the mansion and an alarm signal showed that something was wrong in the sub-basement. Kitty examined the situation and ran afoul of the offspring of the alien Sidri, which had destroyed the mansion before. 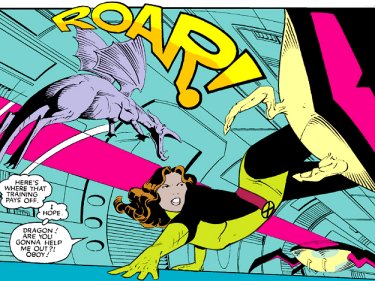 Though her powers were neutralized by the aliens, Kitty was still capable of holding her own against the two Sidri – with some help from the little dragon, who inexplicably had followed her to Earth. Xavier was so impressed, he allowed Kitty to return to active duty with the X-Men. Kitty kept the mysterious little dragon and named him Lockheed. [Uncanny X-Men (1st series) #167-168]

Kitty started experimenting with her look again and soon tried out another codename as well, going by Ariel for a few missions. Kitty had developed a close friendship with Peter Rasputin’s little sister, Illyana. This bond grew even stronger after Illyana was abducted to the other-dimensional realm called Limbo, where time passed differently, and returned the same age as Kitty. [Uncanny X-Men #160] Kitty and Illyana became the best of friends. The two shared an ill-defined link that made Kitty susceptible to Illyana’s magic and left her as the heir to that magic whenever Illyana was incapacitated or renounced it. One aspect of that link was that Kitty could hold Illyana’s Soulsword – the expression of her magical might – something no one else could do. As a result, the Soulsword could harm Kitty, even though it was only supposed to affect magical beings and spells. [Uncanny X-Men (1st series) #203, New Mutants (1st series) #30, 36]

Shortly after their return to Earth, the X-Men found themselves on a search for Angel who had been abducted. Their search led them to the tunnels under Manhattan where they ran afoul of an underground community of mutants called the Morlocks. The misshapen mutant Caliban was one of them and wanted Kitty to stay with him. Kitty and several X-Men had been infected with one of 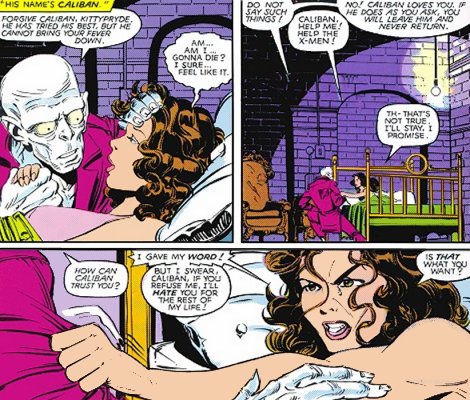 the diseases spawned by the Morlock called Plague. Desperate to save her teammates, Kitty promised to stay with Caliban if he helped the captured X-Men against the Morlocks and their leader Callisto. Despite her pledge, Kitty had no intention of honoring her promise. Caliban helped by revealing that Callisto could be challenged to a duel for leadership. Storm did so and to everyone's surprise, won the knife fight using both her skill with a blade and unexpected ruthlessness. [Uncanny X-Men (1st series) #169-170]

Storm’s fierce new attitude led to an outward change in her appearance. During a visit to Japan, Ororo bonded with and was deeply influenced by Wolverine’s wild friend, Yukio who encouraged her to adopt a decidedly "punk" look that included leather, spikes and a mohawk. Kitty was appalled and could not understand the changes in her friend. She started avoiding Storm and was clearly uncomfortable with her new look. Storm confronted Kitty and explained that, while she would always be her friend, Kitty couldn’t expect her to be her mother and had to accept these changes and her right to make them – which Kitty eventually did. [Uncanny X-Men (1st series) #180]

Kitty’s broken promise to Caliban soon came back to haunt her. During a fight against the Brotherhood of Evil Mutants, the Morlocks faked Kitty’s death, abducted her, and demanded that she fulfill her promise. Kitty reluctantly agreed, provided that the Morlocks would help save Colossus, who had been horribly injured in the battle against the Brotherhood. The marriage ceremony was halted at the last moment by the X-Men, who had pieced together what happened to Kitty and were out for blood. The battle was cut short by Kitty, who insisted that this was her choice, not theirs.

The Morlock Healer and Rogue worked in tandem to save Colossus, following Kitty’s plan and Kitty chose to honor her word by marrying Caliban. Surprisingly, Caliban declined and released Kitty from her vow. He realized she didn’t love him and didn’t want to make her unhappy. They agreed to be friends instead. [Uncanny X-Men (1st series) #179]

Around this time, Kitty met a local kid from Salem Center in Stevie Hunter’s dance class named Doug Ramsey and hit it off with him. Neither realized the other was a mutant (Doug possessed an intuitive gift for languages) but they enjoyed working on computers together. This caused some jealousy on Colossus's part. Piotr wasn’t sure where he stood with Kitty, as Doug seemed a better match for her in many ways. It was around this time that the X-Men - with the exception of Kitty – and many of Earth's heroes were abducted by the Beyonder and transported to a distant world. During the Secret War staged by the Beyonder, Colossus fell in love with an alien healer named Zsaji, who ultimately gave her life for him. He couldn’t forget her and broke up with Kitty shortly after he returned to Earth. [Uncanny X-Men (1st series) #180, 183]

Heartbroken, Kitty left the X-Men for some time, wanting to get her head together and visit her father (her parents had finalized their divorced by that time). Unfortunately, Carmen Pryde was taking part in some shady dealings with the Yakuza and Kitty stowed away on his plane to Tokyo. The Yakuza discovered her and she was captured by a mysterious clan member  named Ogun. The ninja was more than he seemed. He brainwashed Kitty and not only gave her instant martial 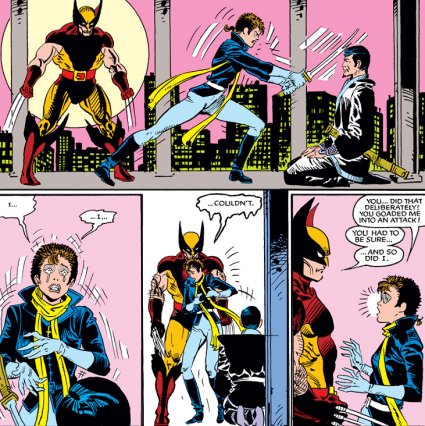 arts skills but molded her personality in his own image. As her final test, Ogun sent her after her would-be-savior - Wolverine. Kitty would have killed Wolverine, if not for Logan’s partner, Yukio, who managed to subdue her. When she woke, Kitty seemed to be back to her old self again, but quickly realized that the Ogun persona was still within her and would ultimately consume her if she didn’t fight him. Logan tried to take her through the school of hard knocks, mercilessly pushing her – though always giving her the choice – until she was mentally strong enough to face Ogun. However, Kitty decided secretly to leave and let Xavier help her. When she reached the airport, Kitty resolved to act like a grown-up by facing Ogun herself. She did just that and with Logan's help, she succeeded. She proved her own strength of character by showing mercy to Ogun and thereby proved that her own personality had won out. After this experience, Kitty took the codename Shadowcat. Though she still experimented with her look, she now gravitated toward dark blue costumes with masks. [Kitty Pryde & Wolverine #1-6]

A surprise awaited Kitty upon her return from Japan. The X-Men had accepted a new team member – Rachel Summers, a teenager from the same alternate timeline as the future Kate Pryde. Kitty remembered Rachel from the period she had switched bodies with Kate and was the first of the X-Men to bond with and befriend the emotionally fragile girl. [Uncanny X-Men (1st series) #192] During that time, she also managed to patch things up with Colossus. Their friendship was an uneasy one at first but they eventually became close friends. [Uncanny X-Men (1st series) #197]

Shortly after Magneto replaced Xavier as headmaster of the school, he saved Kitty’s life from a group of mutant haters. Surprisingly, he chose to handle the matter with mercy, a sharp contrast to the furious Rachel who wanted to kill them for hurting Kitty. Impressed by the seeming sincerity of his attempt to change, Shadowcat began to admire him. They shared something in common, as they both were of Jewish heritage. During a meeting of Holocaust survivors on Holocaust Memorial Day, Kitty spoke out to the community on the behalf of her recently deceased grandfather, who had always wondered what had become of his sister. It turned out that she had been an acquaintance of Magneto during the days he was incarcerated in Auschwitz. Kitty's admiration for Magnus grew after hearing tales of his efforts to help others in the camps less fortunate than he. [Uncanny X-Men (1st series) #196-199]

While attending a party held by the local high school with the New Mutants, Kitty befriended an outsider named Larry Bodine. Larry was secretly a mutant and was hounded by his schoolmates, who threatened to send X-Factor (then posing as an anti-mutant group) after him. Though they were unaware that Larry was truly a mutant, their bullying and threats only added to his fear and 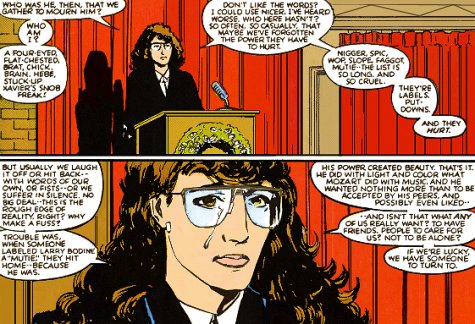 isolation. Trying to ingratiate himself with Kitty and her friends, he made a few anti-mutant jokes. As a result, Kitty broke off their friendship. In utter despair and fearful that X-Factor would soon come for him, Larry committed suicide. After his death, Kitty learned that Larry was a mutant when she discovered a beautiful sculpture made of pure light in his room. Touching it, the unique piece of art dissolved. Kitty understood that she had acted without thought, just like Larry had when he committed suicide. During a memorial assembly, Kitty addressed Larry's fellow students in a brutally honest speech on prejudices. [New Mutants (1st series) #45]