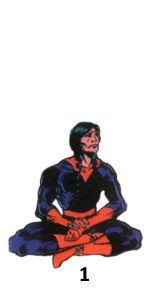 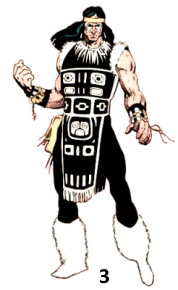 2) This is Shaman's most widely known uniform. An orange and green skintight outfit covering his entire body, plus a belt holding a pouch, boots and bracers -- all dull, earthen orange in coloration. The mystery of the Shaman's pouch can be made realistic in life. An Indian's medicine bag was believed to contain powers and, if another person were to peer in their bag, their very soul would be lost. Shaman wore two different variations of this style of clothing. Originally, the outfit included no "breech cloth," the Indian term for loincloth, though later on he added the excess material, which was off a cloth off an earthen orange color. [Alpha Flight (1st series) #1, 12]

3) After surviving the Test of the Spirits Shaman‘s daughter, the Talisman, reluctantly rewarded her father with these clothing. They were called the "trappings of power" by Michael's long dead grandfather. A black caribou coat with white along the trim hid his black caribou leggings, breech cloth and his upper garment. All around the torso of his uniform, Michael wore the rune signs of ancient Sarcee spells and, around his neck, hung elongated teeth of a long dead sacrificed animal. In his hand, he carried his Spirit Staff, which helped in the focusing of his magical attacks. Finally, atop his brow, he was given the Eagle Crest, a magical item that could call forth Michael's familiar and intermediary between the realm of earth and that of the spirits. This familiar's name was Eaglet. [Alpha Flight (1st series) #35] 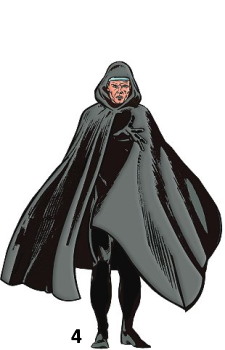 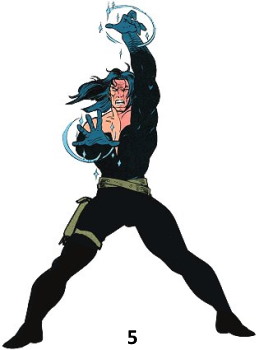 4) Partially blaming himself for the mental brain damage his daughter had suffered, Shaman switched to an all black costume, as if in mourning. The only thing not black, his white headband, was more often than not covered by the hood of the huge cloak that came along with the outfit. While this look added to his image as a sorcerer, it also made him seem distant and lonely. [Alpha Flight (1st series) #92]

5) Several weeks later, Shaman had gotten rid of the cloak and, though he still wore an all-black outfit, save for some brown leather elements like the pouch and some belts, it also showed a lot of skin. The upper half of his chest and back were bare, which seemed rather unusual for a hero in his late forties, no matter in what good shape he is in. [Alpha Flight (1st series) #111]

-) After making amends with his daughter, Michael stopped wearing black costumes and switched back to versions of his old green and orange suit. [Alpha Flight (1st series) #128]