Michael Twoyoungmen is a Native American Canadian, born on a Sarcee Reservation near Alberta, Canada. Despite his ancestors being powerful shamans of their tribe, Michael refused to believe in any of their ancient traditions and, instead, turned to science. He studied medicine and became a doctor, in fact one of the best surgeons of Canada. Together with his wife, Katheryn, and their young daughter, Elizabeth, Michael was living in the District of Haysboro, Canada when he was called before his grandfather for a meeting. The old man once more tried to get Michael to accept his pre-ordained path, but he wouldn’t hear any of it and left in anger. The grandfather knew, though, that one day he would come back and realize his magical heritage.

Back home, Michael Twoyoungmen found his young “princess” playing with her baby-sitter, Heather McNeil, a girl from next door, who informed Michael of a phone call from his wife’s doctor. Once he arrived at the hospital, he was shocked to hear that  Katheryn was terminally ill. 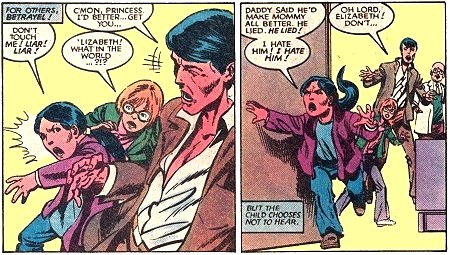 Not wanting to accept her fate, Michael swore to prove himself as Canada’s best physician by saving his wife’s life. However, all his efforts in the following months were futile. When his little daughter asked him to make her mother feel better, Michael made the error to promise her that. Shortly thereafter, Katheryn succumbed to her illness and passed away. Elizabeth, feeling betrayed, ran from her father’s arms, calling him a liar. As Michael’s grandfather died the same day, Michael’s neighbors, the McNeils, offered to take care of Elizabeth till she got over her torn feelings, giving him some time to come to terms with everything. [backstory in Alpha Flight (1st series) #5]

However, Michael was a broken man and he never returned to pick up his daughter. For the next ten years, he isolated himself from civilization, living in a lonely cabin only a few minutes walk from the townsite of Banff, in Alberta Canada. Pondering about the mistakes in his life, Michael remembered the strange bag he  received a couple of days after his grandfather’s death, which 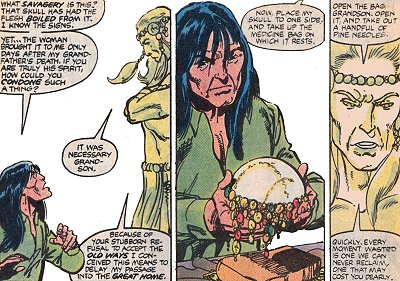 he was not to open until the time was right. Deciding that time had come, Michael opened the bag and was in shock by the site of the apparition appearing before him. At first, he thought he was going mad but then, seeing the specially treated skull inside the bag, Michael realized that the apparition was the spirit of his ancestor. Over the next weeks, the apparition taught Michael in the ways of the Sarcee Medicine Men, perfecting both his body and mind. Finally, Michael’s training was complete when learned how to use the magical medicine bag, which too was in the package inherited from the old man. Simply by believing in and focusing on himself, he could pull objects from the apparently empty pouch. Having passed this final test, his grandfather’s ghost was able to finally rest. [backstory in Alpha Flight (1st series) #6]

A short time after his training was completed, Michael Twoyoungmen was called by the Great Spirits to a sacred place, to meet a pregnant goddess by the name of Nelvanna. During their meeting, Michael summoned forth mystical elements and enchantments of words that he didn’t even understand. The embryo was unstable in birth and, in order to stabilize her form, Michael bound the child to the soil of Canada. After the ritual, Michael held the newborn child in his arms and realized it was a metamorph, human and god all rolled up into one being. [backstory in Alpha Flight (1st series) #7]

The girl, Narya, aged rapidly and, after several months during which Michael prepared her for her Earthen tasks, she already looked like a woman in her twenties. While staying in the Banff National Park, they were met by Heather McNeil Hudson, now married to James Hudson, one of Canada’s leading scientists and founder of Department H. Shockingly for the two would-be visitors, at night Heather noticed Narya turn into an owl and fly off. After her shocking discovery, she questioned Michael. He told the young couple the truth about Narya and how he was able to secure her to the land, with the help of the goddess Nelvanna. After his story was complete, 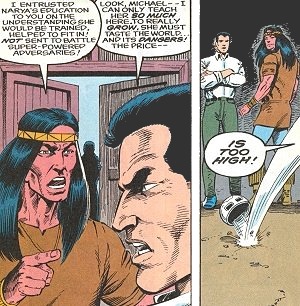 Michael appealed to James not to reveal Narya’s secret to the world.  James had no intention of doing so. Instead, he offered her further training under the watch of Canada’s secret Flight program for super-powered people. [backstory in Alpha Flight (1st series) #8]

Michael let Narya continue her education with Hudson, thinking that Department H would help her to fit in with society. However, when the subjects of the Flight program were sent to battle super-villains, already one member of the group being killed in their first mission, Michael was rather angry with Hudson. [Alpha Flight Special (2nd series) #1] The fight must have been resolved, because Narya, now referred to as Snowbird, continued to serve Department H and Michael too became a trainee, possibly to keep a closer watch on his charge.

Some months later, both Snowbird and Shaman, which was Michael’s codename, were among the individuals picked for the primary team, Alpha Flight, while the other trainees had not yet made enough progress to be considered for field duty. Department H planned for their operatives to be implanted certain tracking chips, but Michael found that this would invade his privacy and his mystic senses would alert him anyway if there was something needing Alpha Flight’s attention, so he refused to have such an implant. Hudson, part of the team as Vindicator, backed up this choice. [Alpha Flight (1st series) #92]

Not much later, the team made their public debut, which sadly was a mission to bring back one of their own. Wolverine had left Canada and joined the X-Men, but the Canadian Government thought that they had invested too much money in his training and equipment to simply let him go. Alpha Flight battled the X-Men at the airport of Calgary to a stalemate and, while Logan pretended to return with Alpha, he later slipped away again. [X-Men (1st series) #120-121]

Later on, Alpha Flight and Logan sorted out their differences. Further, he helped Shaman, Snowbird and Hudson to deal with the Wendigo, for example. When Alpha Flight returned home, however, they learned that their organization had been disbanded. The destruction caused by the team’s earlier battles showed the government that they couldn’t afford to keep a super-powered team on their payroll. Officially, all of Department H was disbanded but, thanks to the threat of the Great Beast, Tundra, Alpha Flight was forced to fight once again. Afterwards, they opted to remain together as a team, even without government support. [X-Men (1st series) #140, Alpha Flight (1st series) #1] 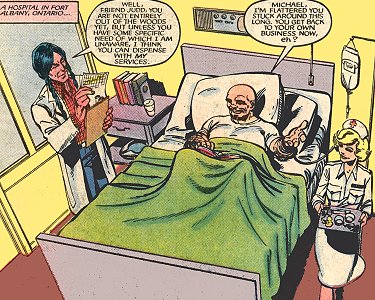 Michael was the one who inspired James Hudson to change his codename from Vindicator to Guardian, reasoning that he was wearing the Canadian flag for a costume and should therefore consider the image he was distributing.

When Puck, one of Shaman’s teammates, was gravely injured, Michael’s medical knowledge came in handy. Despite him not having operated for over ten years, Michael performed the surgery on his friend himself and watched over his recovery while he was staying in a hospital. [Alpha Flight (1st series) #2, 5]

Time passed and there came an event where Charles Xavier needed to enlist the help of Alpha Flight in saving the X-Men from capture.  Before the mission began, Michael meditated on his 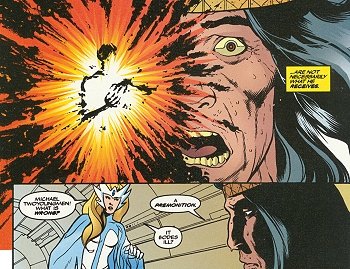 upcoming trial and called upon the great spirits to give him an insight to the battle that was before him, but it came differently than he had expected. The gods showed him a precognitive vision of James Hudson’s death. Shaman was unsure how to handle what he had learned and, while the team fought through hundreds of HYDRA guards, he kept a close guard of his friend. In the end, Alpha Flight and the X-Men were victorious, with the Guardian’s life still remaining intact. Michael wondered what the vision then had referred to, but decided not to tell Hudson of it. [X-Men & Alpha Flight (2nd series) #1-2]

Some time later, Alpha Flight received a distress call from James Hudson, who had moved to 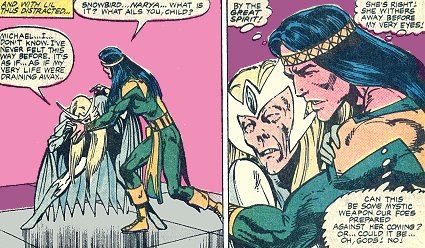 New York with his wife.  While the other teammates gathered, Shaman again felt the presence of death of someone close. Snowbird tried to dissuade his worries, reminding him that it was due to it being the anniversary of his wife’s death, and he hoped that she was right. Michael was also concerned about Sasquatch’s continuing mood swings, him more and more often giving in to some bestial rage. However, he quickly put aside these worries when they arrived in New York, as Snowbird collapsed and began to wither before his eyes. He realized that, in birth, he had bound her to the soil of Canada and, apart from it, her lifeforce was pulled away from her. 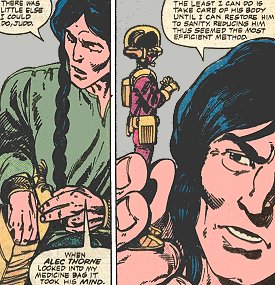 Shaman stabilized her condition, which left him open for an attack from Omega Flight’s Smart Alec, who stole his pouch and, wanting to uncover its secret, gazed into it. Panicked, Shaman yelled for Smart Alec to stop but it was too late. Alec’s mind was wiped clean by the sheer wonderment of the sights he had seen. Shaman reduced Smart Alec in size and stored him in his pouch, so that one day he would be able to save him from his vegetable state. The battle ended quickly and, though the villains were defeated, there was also one casualty - Guardian had been turned to ashes by his malfunctioning suit - Shaman’s vision had come true. (Later, it was revealed that Guardian had survived, as the explosion had hurled him through space and time) [Alpha Flight (1st series) #12-13]