Almost instantly, Michael grew colder and more distant, showing little to no emotion. Also, he no longer had the need to eat or sleep, much to the concern of his teammates. Being the Talisman affected him as much as it had his daughter, though he seemed a little better prepared to handle it. He explained that, as the binder of spirits, he was forced to be like those he binds, without love, without joy and, most importantly, without friends. [Alpha Flight Annual #1]

Shaman tried to console Narya in the fact that the spirits would be searching for Pestilence, even while they were busy with other Alpha Flight missions, and, indeed, after a short while they found the villain, who was still inhabiting Snowbird’s baby. As the other Alphans were away, Shaman and Snowbird followed him on their own, but he left his pouch in Alpha’s mansion so that by upon their return, a mystic message would appear out of it and tell Alpha Flight where to find them. By the time they had reached the battle, they found Michael using his powers to control the Sasquatch form of Snowbird and commanding her to destroy Pestilence by killing his host, the child. Vindicator opted for another solution and wanted to prevent her teammate from slaying her offspring, which in the end led to both their deaths. [Alpha Flight (1st series) #44]

The bodies of mother and child were reunited with Snowbird’s husband, whom Pestilence had killed earlier, and were given a decent funeral. During the ceremony, Shaman used his binding spirits power to call upon Nelvanna and the gods of the Great North and  convinced them to 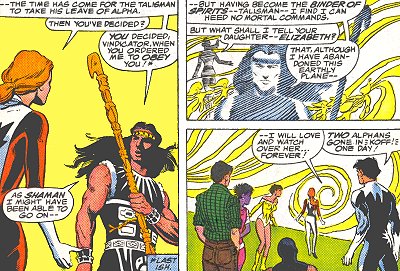 reaccept Narya as one of them and allow the souls of the family to join them in their realm. After their departure, Michael told Vindicator that he no longer could be an Alpha Flight member, for the earlier battle had showed that the Talisman would not be able to obey someone else’s orders. He teleported away, telling Heather to inform Elizabeth that he would always be with her and watch over her.

Had he stayed, he might have learned that, in his absence, the tiny figure of Smart Alec had walked out of this medicine bag, temporarily hosting the soul of Walter Langkowski (it had been lost from the Box robot earlier on). While Alec‘s body was soon destroyed, Walter found a new permanent home in Snowbird’s deceased Sasquatch form. [Alpha Flight (1st series) #45] 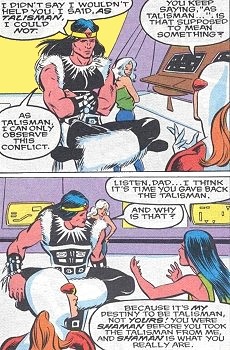 Michael isolated himself from the outside world and set up camp at the Eye of World. It was over half a year later that he was sought out by Alpha Flight again, them needing the power of Talisman to defeat the imminent threat of the Dream Queen. Strangely, Elizabeth Twoyoungmen could sense her father’s location and guided Alpha Flight to him. He had predicted their arrival and accompanied them back to Ottawa, but kept repeating that, as Talisman, he could not aid them. Liz realized that this meant she would have to reclaim the power that was meant to be hers and convinced her father that she was ready to take back the tiara and the responsibilities that went with it. Michael agreed and gave her back the tiara, now “only” being Shaman again. [Alpha Flight (1st series) #68]

Not much later, another mystical opponent, Llan the Sorcerer, trapped Alpha Flight in a non zone between dimensions, after tricking Talisman into releasing him. Through the Crossroads of realities, Alpha Flight made their way across various worlds in order to find their own, fighting menaces as they went.  On one world, they were forced to battle

doppelgangers of Earth’s heroes and Shaman was hit in the gut by Thor’s hammer hurled at him full force. It seemed that Shaman was dying but, unbeknownst to Alpha Flight, they were on the world of the Dream Queen, where thoughts could shape reality. Once they learned this, Shaman could heal himself. Knowing their exact location also allowed Talisman to open a gateway back to Earth and Alpha Flight could return home. [Alpha Flight (1st series) #72, 75] 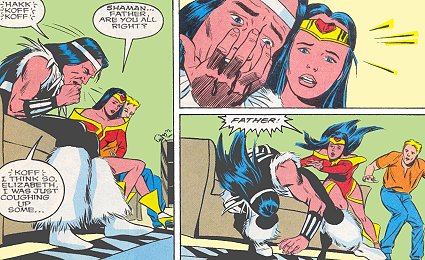 However, once back, Shaman and Puck found that the changes made to their bodies were no longer stable. His internal injuries reopened, Michael started coughing up blood and both he and Puck were taken to the nearest hospital. Emergency surgery saved his life and, fortunately, there were no organs damaged. [Alpha Flight (1st series) #76, 78]

Before long, Shaman was given a clean bill of health and could rejoin Alpha Flight, right in time for the big confrontation with Llan. He helped Talisman to take a spiritual journey 10,000 years into the past to watch a previous wearer of the Talisman encounter and subsequently defeat Llan the Sorcerer. During the large battle with Llan’s army, he pooled his magical abilities with those of Gamma Flight’s Witchfire to distract the villain long enough for Talisman and Dr. Strange to open the gateway of Day and banish Llan and his followers. [Alpha Flight (1st series) #82-83, 86] 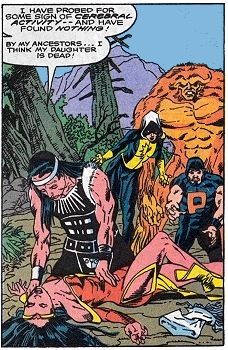 Searching for their missing teammate, Puck, who had been abducted from the hospital, Shaman and few other Alphans discovered that the Master of the World had returned and was using him as a cloning matrix for his Remnant Men, a number of warrior creatures. Puck himself had been deformed during the process, several earlier changes made to his body interacting in an unpredicted way. Thanks to the bio-chemical skills of Sasquatch, Puck was easily restored, but the heroes were overwhelmed by the Remnant Men, whom they could not fight without hurting the humans they had been before the Master’s tampering. Time was of the essence, so Talisman ordered her father, Shaman, to hand her his pouch. She placed it on her head, using her mind as a filter for the millions of different spells inside, searching for the single one needed to transform their opponents back to their original state. She succeeded in finding it and restoring them, though not without suffering severe neurological damages. [Alpha Flight (1st series) #87-90]

Shortly thereafter, a Soviet terrorist group hijacked a British submarine with nuclear weapons and navigated it near St. John, Newfoundland. The British asked the Avengers for help while the other involved nations sent their own hero teams - the People’s Protectorate and Alpha Flight.  Despite the teams‘ best efforts, which were made harder by the Atlanteans interfering as well, the bombs 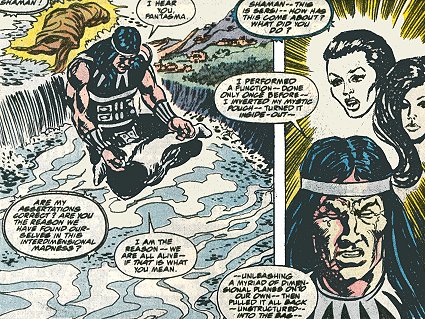 went off. A large part of Canada would have become a nuclear wasteland if not for Shaman. By temporarily turning his pouch inside out, he managed to scatter the radiation of the explosion, the other heroes, countless civilians and a large portion of the land into the countless dimensions of the pouch. It was a rather straining effort and he couldn’t have done it without Sersi and Fantasma working together with him from within. Trying to return everyone, Shaman found that they all were radioactively poisoned. Only after the heroes managed to convince the terrorists, who had merged into one nuclear entity, to cleanse them, could everyone be returned safe and sound to the Earth. [Avengers (1st series) #320-324] 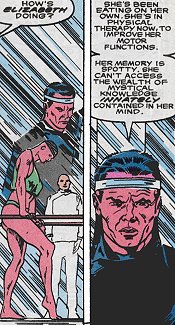 In the following weeks, Michael was happy to see Elizabeth make some progress. While she had to re-learn how to eat and walk, she was slowly but surely recovering. When Alpha Flight was reorganized, Shaman now sported an all-black costume with a huge cloak that made him look more isolated than ever before and was no longer among the active roster. Instead, he was assigned to the Gamma Flight support staff in dealing with supernatural sciences and also to be the instructor of the Beta Flight training team. [Alpha Flight (1st series) #91, 95]