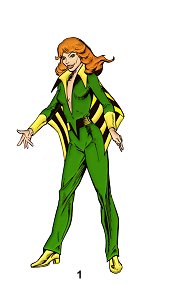 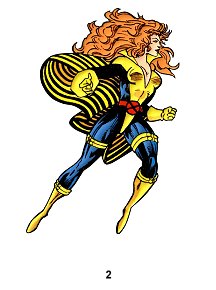 1) When Siryn first debuted, she wore a feminized version of her father Banshee’s outfit: basically a green pantsuit with loose trousers, a high collar, combined with a deep cleavage – the only overtly feminine part of the costume – and the yellow and black striped gliderwings, that she (like her father) wears in most incarnations of her costume. [Spider-Woman (1st series) #37]

2) As part of the Muir Island makeshift X-Men team, Theresa wore the standard modernized black and gold outfit, in her case customized with the gliderwings and usually with a high collar. [Uncanny X-Men Annual #15] 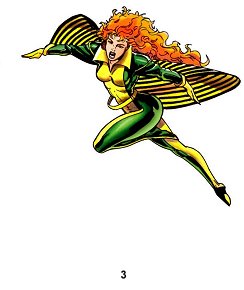 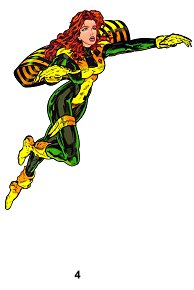 3) When joining X-Force, Siryn had made herself an updated version of her original outfit. The uniform was tighter with no cleavage and a yellow stripe went from neck to toe, with no visible boots. It once again had the ubiquitous high collar and more prominent gliderwings. [X-Force (1st series) #3]

4) A later variation of the outfit still had the same color scheme, but no longer a high collar. The yellow stripe only was from neck to crotch. She wore short yellow boots and gloves to offset the deep green. [X-Force (1st series) #19] 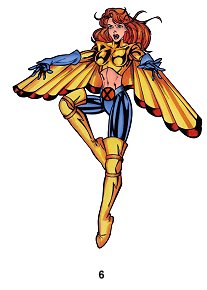 5) Somewhat later, all members of X-Force received costumes in the same color scheme from Cable – deep purple and gold-orange to look more like a team. Theresa wore a deep purple tight bodysuit, above it a short yellow-golden jacket, to which yellow-red very loose gliderwings were attached and thigh-high clunky boots. [X-Force (1st series) #48]

-) The members of X-Corporation Europe adopted uniforms that included elements of their own individual costumes from before, combined with the vast supply of shirts, jackets and coats provided by Xavier’s school after it had gone public. On top of a long-sleeved, yellow and black striped shirt, Theresa wore green leather pants and a leather vest styled after the X-Men’s jackets, though colored green and yellow instead of black & yellow. [New X-Men (1st series) #128] 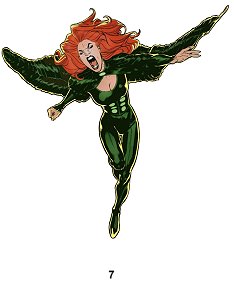 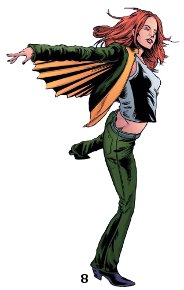 7) Upon joining Madrox’s X-Factor Investigations, Theresa sometimes wore an elegant tight dark green bodysuit which covered her from neck to toe, apart from some cleavage under a (now Kevlar-enforced) collar. As usual, she has loose gliderwings. Thanks to a corset-like broad belt, the outfit seems even tighter. [X-Factor (3rd series) #1] Like many of her fellow X-Factor members, she has also taken to adopting a streetwear-like look. In her case, simple pants, a shirt and a green jacket with short gliderwings. [X-Factor (3rd series) #13]

8) After the team went through a bit of a shake-up, Siryn took to wearing a costume that looked like regular street clothes with a superhero twist. With a green and yellow jacket, she brought back her black and yellow wings that enabled her to fly with ease. She continued the green theme with her jeans and boots, topping it off with a white tank-top. [X-Factor (3rd series) #41] 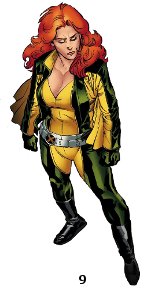 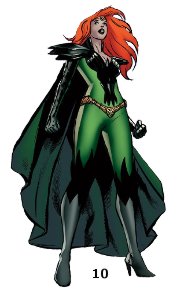 9) After taking the name Banshee, Theresa decided to alter her costume slightly to reflect her new situation. Keeping the yellow and green winged jacket she ditched the street clothes and wore a yellow and green body suit underneath.

10) When she took over Morrigan’s role and became a goddess, Theresa underwent the most dramatic change of her career. Her bodysuit was now a vivid green, which was darker on her feet and arms, as well as her cape. A large, black raven symbol adorned her chest and its wings formed an impressive set of shoulder pads. She topped off the look with a tiara that was shaped into a raven symbol on her forehead. [X-Factor (1st series) #244]